Google “labor shortage” or “wage hikes” and the result is a picture of an overheating economy. Some examples from August 10:

Now hiring: teenagers (and anyone else willing to work)

You can’t read these headlines and not expect wages to climb dramatically as desperate companies pay what they have to in order to keep their customers happy. But the macro numbers tell a different story. Here’s the change in average hourly earnings over the past decade: 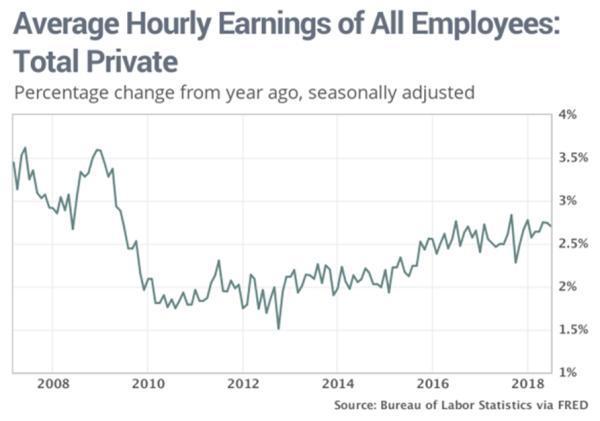 Wages are clearly rising, but are 1) still way below the growth rate that prevailed heading into the Great Recession and 2) barely exceeding inflation, which means real wages aren’t rising at all.

How to reconcile wide-spread anecdotal labor shortages with slow to non-existent wage growth? Some possibilities, drawn from a recent MarketWatch analysis:

The implication? This expansion may have a little longer to run, since wage hikes aren’t yet sharp enough to spur the Fed to aggressive tightening. But eventually all those labor shortage data points will coalesce into an inflationary picture, as employers discover that their choice is between lower margins and extinction.

At that point the Disney article you might have noticed above – in which the company granted 30% increases to a broad section of employees – will become the norm rather than the exception, and wage inflation will start driving the discussion. Here’s an excerpt from that article:

Can the Magic Kingdom spread its fairy dust on America’s meager wage hikes?

Disneyland and key unions just agreed to an eye-catching contract for roughly a third of its 30,000-plus workers that will bump pay for the lowest-paid workers by as much as one-third — yes, 30-percent-plus — to $15-an-hour by January. That’s three years before the state’s escalating minimum wage hits that mark.

The added significance of this stunning pay hike in an economic era featuring remarkable corporate penny-pinching is that this involves a closely-watched corporate icon that has been a managerial trendsetter.

Workers everywhere — from other unions to individual employees to other Disney employees — should feel empowered to nudge bosses on pay. And if the request is denied, those workers may find a better-paying job elsewhere.

Disneyland may not want to be seen as endorsing $15 as a workable pay floor — but this contract will hit that magic level three years before the state’s mandate.

This Disneyland contract could be the forerunner of more significant pay across the tourism field.