During my last appearance on CNBC, before I was banned several years ago, I warned that the removal of massive and unprecedented monetary stimuli from global central banks would have to be done in a coordinated fashion. Otherwise, there would be the very real risk of currency and debt crises around the world.

However, coordination among central banks is not what is happening. The Fed is miles ahead in its reversal of monetary stimulus, as it has already raised rates seven times; with two more 25bps rate hikes in the pipeline scheduled for later this year. It has also avowed to sell off two trillion dollars’ worth of debt off its balance sheet–while the rest of the world’s central banks are far behind in this monetary tightening course. This has led to a significant increase in the value of the US dollar.

The strengthening dollar is placing incredible stress on the EM space, especially those countries that hold onerous dollar-denominated debt in conjunction with large current account and budget deficits. This is reminiscent of the Asia Debt Crisis that took place in the late 1990’s, which took Wall Street for a wild ride as well.

From 1985 to 1996 Thailand’s economy grew at an average of over 9% per annum. Those envious  growth rates attracted “hot” money from around the globe and helped send the Debt to GDP Ratio soaring. During Thailand’s golden years, inflation was at bay, and the Thai baht was pegged to the dollar at 25 to 1. Then in May of 1997, the baht was hit with massive speculative attacks–the market sensed the blood in the water. On July 2, 1997, currency and debt pressure forced Thailand to suddenly break the peg with the dollar and let the currency devalue. This currency turmoil resulted in substantial depletion of Thailand’s official foreign exchange reserves and marked the beginning of a deep financial crisis that spread across much of East Asia.

In turn, Malaysia, the Philippines, and Indonesia also allowed their currencies to weaken, and market turmoil affected stock markets in Hong Kong and South Korea.

By August the International Monetary Fund (IMF) came in with a $17 billion-dollar bail-out package; and then another bail-out of $3.9 billion was necessary soon afterward. Shortly after the Asia crisis subsided, the Russia crisis began; eventually leading to the infamous demise of the hedge fund Long Term Capital Management, and the ensuing Fed-orchestrated bail-out of Wall Street.

During that decade of Asian economic ebullience, the foreign currency debt to GDP ratio rose from 100 percent, to 180 percent at the peak of the crisis.

Turing to today, a decade’s worth of interest rate suppression in the developed world has sent global investors on a frenzied chase for yield like never before in the emerging markets. Excess liquidity has resulted in fiscal mismanagement, current account deficits, and large dollar-denominated debt loads. According to the Institute of International Finance, corporate debt in foreign currencies has soared to $5.5 trillion, the most ever on record.

EM economies were already under stress from the waning of China’s second massive credit impulse since 2007, which was designed to ensure the permanency of the Xi Jing Ping dynasty. Emperor Xi was enshrined by the results of the election in March of this year, but that didn’t fix China’s untenable debt position.  Bloomberg recently reported that non-performing loans in had their biggest quarterly increase on record in Q2, up to nearly 2 trillion yuan. Communist China can no longer be the credit card to the developing world. Its own destabilizing and rapidly growing 300% debt to GDP ratio, according to the Institute of International Finance, has curbed its impulse to pave over eastern Europe and the rest of Asia, a.k.a. it’s “Belt and Road initiative.”

And this brings us to the latest EM debacle making news today. For years Turkey has been stimulating its economy through easy credit and budget deficits.  Much like China, Turkey has piled on foreign denominated debt to fund government-sponsored projects that lack the productivity to curb the debt burden. This past Friday its currency dropped as much as 16% relative to the dollar, and the lira is now down 70% this year. 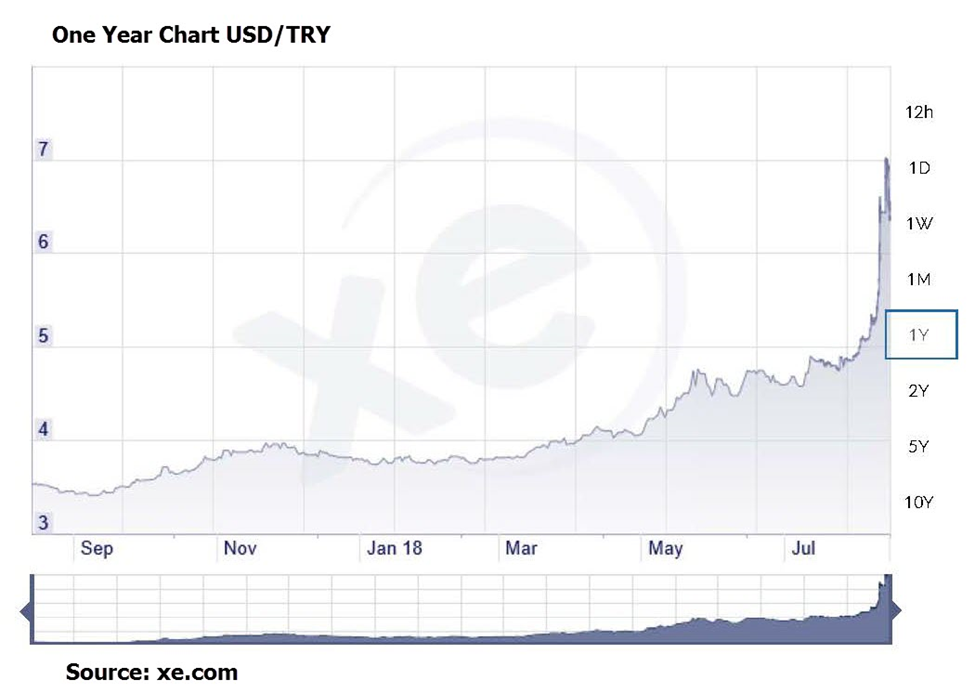 Turkey has one of the highest debt loads in all the EM space; owing some $450 billion to foreign creditors–$276 billion of which is denominated in dollars and euros.

Of course, Wall Street carnival barkers and central bankers are quick to assure us that the situation in Turkey is isolated and contained – just as they assured us the sub-prime debt crisis applied to a small number of troubled loans back in 2008.

It is true that Turkey only represents 1% of global GDP, and is not a systemically vital nation. Sadly, it is also true that Turkey is a paragon for 100% of the problems that exitst in emerging markets. Namely, intractable debt levels with an overreliance on dollar-based loans. Therefore, these teetering economies can become completely destabilized if any one of the following three conditions occurs: A significant fall in the domestic currency against the dollar; a protracted interest rate spike; or a slowdown in GDP growth.  Any combination of the three can lead a nation to insolvency.

As an example of how the situation in EM’s is not contained look at the effect on the European Banking System. Some banks on the hook for this Turkey’s debt include: BBVA (BBVA.MC) of Spain, UniCredit (CRDI.MI) of Italy and BNP Paribas (BNPP.PA) of France, and their shares have been plummeting due to this notable debt exposure – let alone the emerging market space in its entirety. 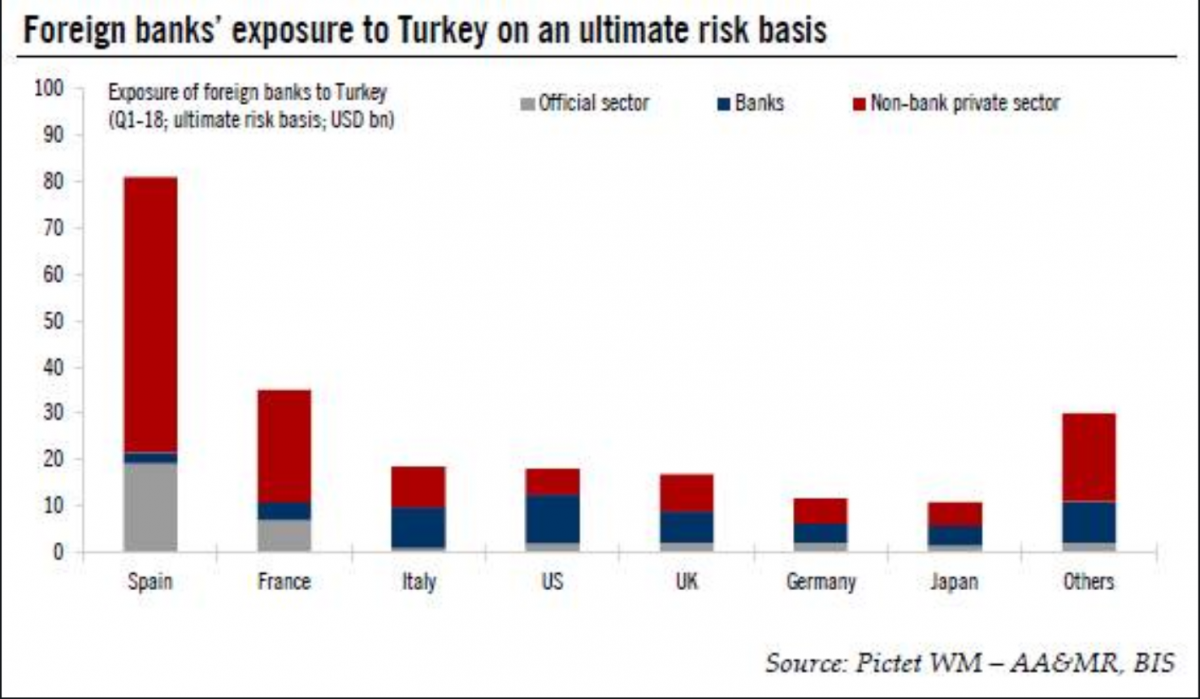 With economies around the globe such as Venezuela, Iran, Brazil, Argentina, Mexico, Indonesia, Russia, and South Africa in various stages of turmoil, it is prudent to say that we are likely embarking upon an EM debt crisis comparable to Thailand in 1997 and Russia in 1998; in which both countries closed their capital accounts after attracting billions of dollars in foreign loans. These defaults hastened one of the most severe liquidity crises in world history.

The world economies are caught in the crosshairs of an unprecedented tightening in monetary conditions, including the never before attempted liquidation of trillions of dollars’ worth of bonds from the Fed’s balance sheet. The developed worlds central banks are moving to a hawkish monetary policy stance—although not at the same pace–at the same time many EM central banks have been forced to jack up interest rates to defend their currencies. For example, the Argentine central bank just lifted its base lending rate to 45%.

Perma-bulls would have you believe that the problems of Turkey are all about the persecution of pastor Andrew Brunson; who God willing will be released from his imprisonment soon. But his release would not stem the tide of the rising dollar, which is up 9% in the last four months. Nor, would it ameliorate the over-leveraged condition of sovereign nations. Most importantly, it would not rectify a decade worth of interest rate suppression that has engendered the biggest bond bubble in history. In this regard, sadly, much of the distortions in Emerging Markets are also shared throughout the developed world.