Skip to content
HomeEven Mortgage Lenders Are Repeating Their 2006 Mistakes

You’d think the previous decade’s housing bust would still be fresh in the minds of mortgage lenders, if no one else. But apparently not.

One of the drivers of that bubble was the emergence of private label mortgage “originators” who, as the name implies, simply created mortgages and then sold them off to securitizes, who bundled them into the toxic bonds that nearly brought down the global financial system.

The originators weren’t banks in the commonly understood sense. That is, they didn’t build long-term relationships with customers and so didn’t need to care whether a borrower could actually pay back a loan. With zero skin in the game, they were willing to write mortgages for anyone with a paycheck and a heartbeat. And frequently the paycheck was optional.

In retrospect, that was both stupid and reckless. But here we are a scant decade later, and the industry is headed back towards those same practices. Today’s Wall Street Journal, for instance, profiles a formerly-miniscule private label mortgage originator that now has a bigger market share than Bank of America or Citigroup:

One afternoon this spring, a dozen or so employees lined up in front of Freedom Mortgage’s office in Mount Laurel, N.J., to get their picture taken. Clutching helium balloons shaped like dollar signs, they were being honored for the number of mortgages they had sold.

Freedom is nowhere near the size of behemoths like Citigroup or Bank of America; yet last year it originated more mortgages than either of them, some $51.1 billion, according to industry research group Inside Mortgage Finance. It is now the 11th-largest mortgage lender in the U.S., up from No. 78 in 2012. 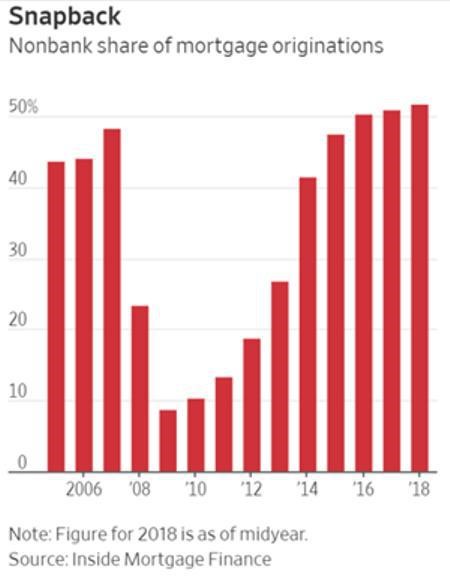 Its rise points to a bigger shift in the home-lending business to specialized mortgage lenders that fall outside the banking sector. Such nonbanks, critically wounded in the housing crisis, have re-emerged to become the market’s dominant players, with 52% of U.S. mortgage originations, up from 9% in 2009. Six of the 10 biggest U.S. mortgage lenders today are nonbanks, according to the research group.

They symbolize both the healthy reinvention of a mortgage market brought to its knees a decade ago—and how the growth in that market almost exclusively has been in its less-regulated corner.

Postcrisis regulations curb bank and nonbank lenders alike from making the “liar loans” that wiped out many lenders and forced a wave of foreclosures during the crisis. What worries some industry participants is that little has changed about nonbank lenders’ structure.

Their capital levels aren’t as heavily regulated as banks, and they don’t have deposits or other substantive business lines. Instead they usually take short-term loans from banks to fund their lending. If the housing market sours, banks could cut off their funding—which doomed some nonbanks in the last crisis. In that scenario, first-time buyers or borrowers with little savings would be the first to get locked out of the mortgage market.

“As long as the good times roll on, it’s fine,” said Ed Pinto, co-director of the Center on Housing Markets and Finance at the American Enterprise Institute. “But all I can say is, we’re in a boom, and you cannot keep going up like this forever.”

Freedom was just a small lender in the last crisis. When it became hard to borrow money, Freedom Chief Executive Stan Middleman embraced government-backed loans on the theory they would offer more stability.

As Quicken Loans Inc., the biggest and best-known nonbank, grew with the help of flashy technology and advertising campaigns, Freedom stayed under the radar, buying smaller lenders and scooping up other companies’ huge portfolios of loans, often made to relatively risky borrowers.

Mr. Middleman is fond of saying that one man’s trash is another man’s treasure. “I always believed that, if somebody is applying for a loan, we should try to make it for them,” says Mr. Middleman.

What does this mean? Several things, depending on the resolution of the lens you’re using.

In the mortgage market it means that emerging private sector lenders are taking market share – presumably by being more aggressive – which puts pressure on the relatively stodgy brand-name banks to lower their own standards to keep up. To grasp the truth of this, just re-read the last sentence in the above article: “I always believed that, if somebody is applying for a loan, we should try to make it for them.” That is fundamentally not how banks work. Their job is to write profitable loans by weeding out the applicants who probably won’t make their payments.

Now, faced with competitors from the “No Credit, No Problem!” part of the business spectrum, the big guys will once again have to choose between adopting that attitude or leaving the business. See Bad Bankers Drive Out Good Bankers: Wells Fargo, Wall Street, And Gresham’s Law. Since the biggest mortgage lender is currently Wells Fargo, for which cutting corners is standard practice, it presumably won’t be long before variants of liar loans and interest only mortgages will be back on the menu.

From a broader societal perspective, this is par for the late-cycle course. After a long expansion, most banks have already lent money to their high-quality customers. But Wall Street continues to demand that those banks maintain double-digit earnings growth, and will punish their market caps if they fall short.

This leaves formerly-good banks with no choice but to loosen standards to keep the fee income flowing. So they start working their way towards the bottom of the customer barrel, while instructing their prop trading desks and/or investment bankers to explore riskier bets. Misallocation of capital becomes ever-more-common until the system blows up.

The signs that we’re back there (2007 in some cases, 2008 in others) are spreading, which means the reckoning is moving from “inevitable” to “imminent”.