Some of the largest immigration expansions, as a percentage, between 2010 and 2017 came from war-torn or economically struggling countries… 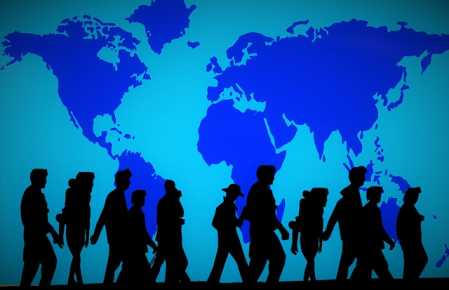 As of July 2017, immigrants —legal and illegal — compose the highest percentage of the U.S. population that they have since 1910.

About one in seven current U.S. residents — 44.5 million — emigrated from a foreign country, according to a study conducted by the Center for Immigration Studies.

If the study includes U.S.-born children of first-generation immigrants, then the total reaches 61.6 million, or one out of every five residents.

In 1980, only one in every sixteen American residents was born in a foreign country.

“American continues to experience the largest wave of mass immigration in our history,” said Steven Camarota, the Center’s director of research and co-author of the report. “The decline in Mexican immigrants has been entirely offset by immigration from the rest of the world. By 2027, the immigrant share will hit its highest level in U.S. history, and continue to rise.”

But immigration from Sub-Saharan Africa, South Asia, and the Middle East jumped by 46, 47, and 29 percent, respectively.

As a result, immigration from majority-Muslim countries rose 31 percent.

Some of the largest expansions, as a percentage, between 2010 and 2017 came from war-torn or economically struggling countries.

There was a 91 percent jump in immigrants — nearly 170,000 people — fleeing socialist Venezuela. About 80 percent more immigrants came from Afghanistan, Saudi Arabia, and Syria. And nearly 60 percent more emigrated from Kenya and Nigeria.

The largest number of immigrants, nearly 1.12 million, came from East Asia — Burma, China, Korea, Philippines, Thailand, and Vietnam. This represents a 15 percent growth from 2010 to 2017.

Between 15 and 20 percent more immigrants came from South America, Central America, and the Caribbean in 2017 compared to 2010.

European immigration held steady, with a negligible 7,000 more immigrants after the 7-year period.

Projections from the U.S. Census Bureau estimate that the share of immigrants as a percentage of the population will grow to 14.8 percent by 2027, the highest in American history.