Last week, we talked about the capital consumed by Netflix—$8 billion to produce 700 shows. They’re spending more than two thirds of their gross revenue generating content. And this content has so little value, that a quarter of their audience would stop watching if Netflix adds ads (sorry, we couldn’t resist a little fun with the English language).

So it is with wry amusement that, this week, Keith heard an ad for an exclusive-to-Pandora series. The symptoms of falling-interest-disease are ubiquitous.

Consumers love it. And why shouldn’t they? If a farmer throws a lavish feast to eat his seed corn, of course the revelers will praise him. As free-marketers praise the plethora of consumer products such as the iPhone and the all-you-can-eat Netflix video buffet. They believe these products are the benefit of capitalism. They’re not, of course. We don’t have capitalism. We have central planning of interest rates, and these phenomena are a product of this central planning.

So this week, let’s move to a different topic: Why are wages so low?

The Left frames this in collectivist terms. They speak of the “share” of wages, always reverting to their Marxist zero-sum view. They think of the economy as a pie, and therefore capitalists are getting more as workers are getting less. So they want to force employers to pay more (which will be a disaster, for all the reasons discussed in our many writings, plus many more). And they want both a higher tax rate on income and profits, as well as a wealth tax. Socialism seeks out capital, and targets it for consumption.

The Right mostly denies that wages are falling. Indeed, they say wages are rising. “Look! Unlimited movies on iPhones!” They’re eager to head the Left off at the pass, before they can enact more taxes and hike the minimum wage.

The gold community sees this issue clearly. Here is a meme we encounter frequently on social media. 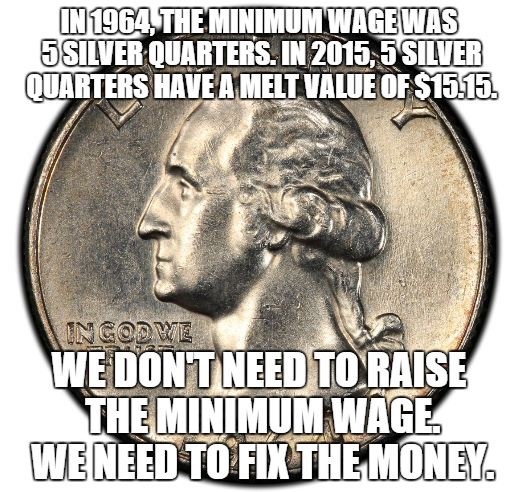 If the minimum wage today were 1.25oz of silver (i.e. $17.86 at Friday’s close), workers would be doing well. If we still had an honest monetary system, based on gold and silver, would the wage have remained this high? Maybe. At least, the drop in wages would be more visible.

Keith wrote an article for Forbes: Measured in Gold, the Story of American Wages Is An Ugly One. In 1965, the unskilled minimum wage laborer made 71 ounces of gold per year. In 2012 (the last year of data available when researching for the article), a senior engineer earned 63 ounces. This is a fact, anyone can do the math. Yet it is so counterintuitive that most people want to argue against it.

The point of the article is that—using the dollar to measure them—both prices and wages are rising. People complain only when wages do not quite keep up with prices. We propose an analogy to jumping out of an airplane. You are in free fall, and unfortunately, your parachute kit is falling separately from you. Since it has greater drag, it is falling at a slower rate than you. As the parachute goes out of your reach, you utter words out of frustration.

“My parachute is going up.”

Obviously not. But this line of thinking raises a question. If it really were as simple as rising quantity of money causes rising prices causes loss of purchasing power, then wages and prices would go up at the same rate (no, we’re not interested in the Marxist argument that employers hold back some of their gains from inflation, that markets don’t work). But wages are not rising at the same rate as prices. So there must be another factor at work to cause them to diverge.

Think Spread, Rather Than Price

Diverge? Divergence! This leads us back to one of the most important concept of economics: spread. The spread between wages and prices is widening. Ever since that Forbes article, Keith has been meaning to come back to the topic and address a broader principle.

In researching for that article Keith found that in 1965, it took about 15 minutes of labor to produce a gallon of milk (including the labor that went into raw materials such as feed), plus one acre-hour of land. In 2012, the labor was down to 1.5 minutes, or a 90% reduction. And land was reduced to 0.25 acre-hours, a 75% reduction. 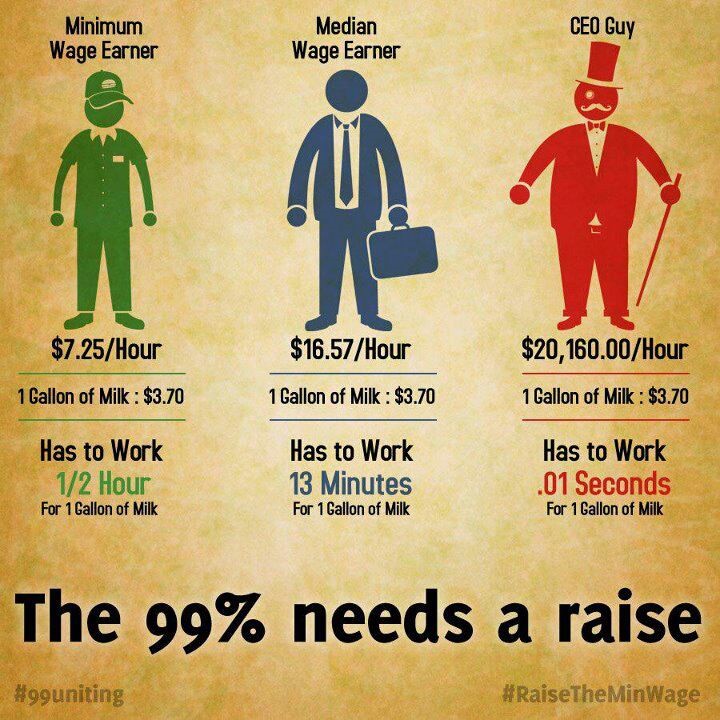 By coincidence, we found this graphic which happens to mention the half-hour of work to buy milk

These are amazing gains in efficiency. However, the worker finds that he does not benefit at all. In 1965, he worked about half an hour to earn that gallon of milk (at the retail price). As of 2012, he’s still working that same half hour.

Do we say that the purchasing power of his labor is the same, therefore no inflation in real terms, therefore all is well with the market? No, that’s utterly wrong.

The point is about spread. The spread between these two prices has widened. In 1965, a worker produced four gallons of milk in one hour of work for his dairy farm employer. And on this wage, he could afford to buy two gallons. He was paid half of the product of his labor. In 2012, his labor produced 40 gallons of milk, and his wage still affords him to buy two. He is getting a far smaller share of what he produces.

Reduced Ability to Coordinate in the Labor Market

In Keith’s dissertation, he proves that widening spreads indicate a reduced ability of people to coordinate their productive activities in the economy. And now we show that the spread on labor has grown ten times wider. That is really bad.

How do we explain this?

One could try to explain it by the addition of capital into every aspect of the milk production process. Nowadays, cows step onto a turn table, which moves them from station to station, from the computer controlled udder-washing machine, to the automatic feed dispensers that tailors the meal to that cow’s milk production. A greater share of the milk production should be attributed to capital as compared to 1965.

But this is not a satisfactory explanation. For one thing, land is a form of capital, and land usage was cut by 75%. We don’t have price data on dairy automation equipment, but we assume that no farmer would substitute expensive equipment for cheap land.

Part of the reason for the explosion of the bid-ask spread on labor is monetary. But as we see from the above discussion, the mechanism is not falling purchasing power due to rising quantity of dollars. It is falling interest rates. A wage is a cash flow into perpetuity. Every time the interest rate is cut in half, the net present value of a perpetuity is doubled. Therefore, the burden of paying a wage has been increasing since 1981 (when rates began to fall).

With each drop in rates, every existing and potential dairy farmer has an increased incentive to increase dairy production. More milk dumped onto the bid price, results in lower profit margins. Dairy farmers (like video content producers) may be producing more, but they are not profiting proportionally. And, contra Marx, workers are in the same boat as their employers. If profit margins are under intense pressure, neither workers nor owners take home fatter checks.

Falling interest causes businesses to feed their investors’ capital to consumers. In the case of dairy farmers, this is literally true. Investment pours in, despite the diminishing opportunity for profit.

This is only part of the reason for the widening bid-ask spread. Another part is: the growth of Leviathan Government. Whatever government spends, that must come out of what everyone produces. In 1965, government spending was 28% of GDP. In 2012, it had increased a bit to 36%. This rise is significant, but it does not explain the tenfold widening of the bid-ask spread of labor.

There is an indirect cost to government, which has grown faster than direct spending: compliance. That dairy farm now must hire its own small army of lawyers, accountants, and food safety officers to defend itself against the relentless onslaught of tax agents, regulators, labor boards, food inspectors, etc. This cost has risen a lot since 1965, but it does not explain the epic increase in the labor bid-ask spread.

We come to one last monetary factor. Speculation. Falling interest rates drive rising asset prices. Chronically rising asset prices set in motion a process of conversion of one party’s wealth into another’s income, to be spent. Speculators are handed free purchasing power. However, there’s a catch as we have said several times.

In order for Paul get something for nothing, Peter must get nothing for something.

Speculators are feasting on milk and everything else. Their milk consumption comes out of dairy owners’ profits and dairy workers’ wages, as well as dairy business capital.

Their feasting not a product of capitalism, any more than the consumer’s feasting on unlimited movies on shiny new iPhones.

We started by saying we were going to change topics. But actually, it turns out that it’s the same topic. Our monetary system incentivizes many perverse outcomes. One of them is falling wages.

If you are alarmed by the widening of the bid-ask spread on labor, if you are outraged by the gutting of the wage, if you are concerned about the future of a civilization that rests on its accumulated capital, while consuming that capital at an exponentially rising rate, then heed our conclusion.

Our defective monetary system is sending false signals, which ultimately destroy the ability of productive people to coordinate their activities. The gold standard enables increasing coordination, which is the antidote.

Keith is working with Nevada, to help them issue a gold bond. He has put up a petition to show the state government that there is support for their move forward, and demand to buy it if they sell it. Please click here for the petition at Monetary Metals, especially if you would consider buying a gold bond. If you’d like to sign, but prefer not to give us your email address, please click here for the petition at Change.org.

The price of gold rose six bucks, and the price of silver rose 26 cents. Before we look at the graphs, we want to address a reader question.

This week, someone asked about how we calculate