After the Salzburg summit, the prospects of the Brexit deal are gloomy as never before. Will gold gain on failed talks between the EU and the UK?

The Salzburg summit was held last week. It was an informal summit of heads of the EU member states or governments. The participants discussed immigration, internal security and Brexit. The negotiations between the UK and the EU attracted the most attention, as Donald Tusk, the European Council president, said that the Chequers plan for Brexit “will not work” and mocked Theresa May’s negotiating strategy in social media (he posted a picture of May and himself at a cake stand with the caption: “A piece of cake, perhaps? Sorry, no cherries.”

May did not like the joke and accused the EU of the lack of respect. She also complained that the EU does not want to negotiate with the UK. But it’s not true. One year ago, the United Kingdom rejected the proposal that the UK would become a member of the European Economic Area and be associated with the common bloc as Norway or Iceland. May rejected the ‘Norway model,’ saying that it would be a “mockery of the referendum.” And six months ago, UK rejected another proposal for an EU trade agreement, i.e. access to the single market (along with Northern Ireland, so that there would be no physical border in Ireland). May rejected the second proposal saying that it would effectively divide the country.

And last week, the British prime minister said that the UK wants to participate only in the free movement of goods, without the free movement of services, capital and people. It is understandable, as about half of the UK exports is going to member countries. However, the EU has been informing for a year that it will not agree to partial access to its market, as it is based on four freedoms, not merely one. There is no “cherry picking”. We are not big fans of EU’s bureaucracy, but we agree that you cannot have the cake and eat it. The UK can either have a loose agreement like Canada, or a close agreement like Norway, but it cannot pick the best bits from both.

What does it all mean for the gold market? Well, we do not see a compromise in Brexit talks on the horizon. The British officials live under the illusion and both sides are standing still. If nothing changes, the UK will exit the EU without the deal on March the 29th, 2019. The EU law will no longer apply in the UK. The millions of Europeans working in the UK will need to have permission to work. There will be custom duties for goods (for example, the tariff for food imports will increase from zero to 22 percent), disrupting the trade chains. Britain would fall out of EU regulatory bodies for things like air safety, medicines, or nuclear materials. So if it does not create own regulations on time, the airplanes might be grounded, while some medicines and isotopes might not be imported. And there could be even a hard border on the island of Ireland.

Moreover, there will be no continuity of financial business as British companies will lose their passports allowing them to sell services and products across the bloc under London’s regulations. It’s difficult to predict all repercussions, but one thing is certain: there will be a lot of uncertainty and temporary disruptions (we wrote “temporary” as there is also life outside the EU and the UK is one of the most developed economies, after all). The exit is likely to be disorderly. The price of gold expressed in British pounds should rise then.

The impact on US-dollar denominated price is not so clear. After the surprising outcome of the referendum, the international price of gold soared, as one can see in the chart below. 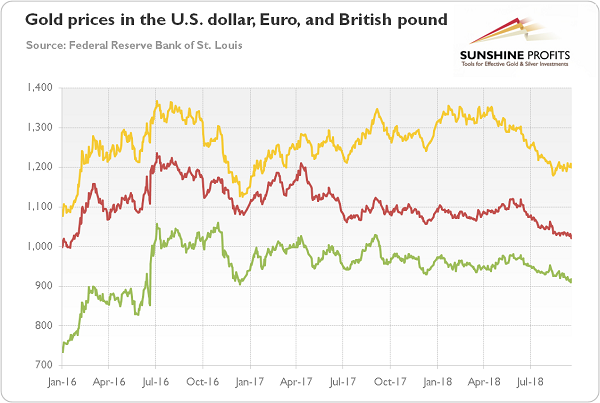 But where two are fighting, the third wins. Hence, the greenback should take advantage on the divorce between EU and the UK. It could limit the possible gains in the gold prices. Please remember that the EU will be weaker without the UK and its financial contribution to the common budget. We will see, a lot may still happen in that Brexit saga.