From Energy In Depth, by Lea Giotto – Re-Blogged From WUWT

A top environmental lawyer for New York City says that the goal of the City’s climate litigation efforts is to restrain industry activity, an apparent contradiction to what the City has stated in recent legal filings in federal court. This admission could have a significant impact on the case moving forward.

Susan Amron, chief of the environmental law division of the New York City Law Department and counsel for the City in its climate lawsuit, made these comments during a session titled “Climate Change, the Courts and the Paris Agreement” that convened in New York City last week for Climate Week NYC.

In front of an audience of lawyers, activists and elected officials, Amron said:

“So, we’re not saying you can’t use fossil fuels, that’s a different part of the city’s efforts, but what we’re saying to the companies is that if you’re going to promote fossil fuels that you need to internalize the cost that these fossil fuels are imposing on cities, and New York City in particular. And really what we’re trying to do is affect the bottom line- the financial equation for the use of fossil fuels.” (emphasis added)

Senator Sanders: “What are you guys doing – what role can you play in taking on the fossil fuel industry?”

Mayor: “I’ll say this for New York City. We just acted, and I want to urge every city, every county, every state to do the same – divest. Divest from the fossil fuel industry. Let’s help bring the death knell to this industry that’s done so much harm. Like the tobacco companies that were successfully sued decades ago. We’re also suing five of the biggest including Exxon Mobil for example who systematically poisoned the Earth, knew about it, covered it up, explained it away, tried to hook people more and more on their product. We think that what every city can do and every locality – use your litigation power to go at these bad actors and get the resources back. We’re looking for billions to make up for what they’ve done to us.” (emphasis added)

On the panel, Amron also spoke to de Blasio’s “We’re looking for billions” comment and shed light on exactly how much the City is hoping to extract from fossil fuel companies through its lawsuit:

“[W]e’ve estimated the cost over the next 10 years for programs that are either in planning or getting underway to be about $20 billion. That’s not economic losses; that’s just the cost of protecting the city over the next several decades.” (emphasis added) 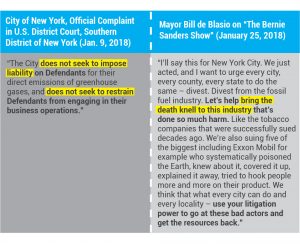 New York City’s lawyers – namely Matt Pawa and Steve Berman of the Seattle-based law firm Hagens Berman – are fully aligned with Amron and de Blasio. In an interview with VICE last year, Berman said the climate lawsuits have “the potential really to bring down fossil fuel companies” and could absolutely secure a big pay day:

“As our interview came to a close I asked Berman to describe the best-case scenario for all this. ‘Imagine if I could get ten or 15 cities to all sue and put the same pressure on the oil companies that we did with tobacco companies and create some kind of massive settlement,’ he said. He acted as if it was the first time he’d thought of the idea. But I got the feeling it wasn’t.” (emphasis added)

The comments from Amron, Mayor de Blasio and Steve Berman could prove troublesome for the City’s lawsuit, as the complaint explicitly denies that the City is seeking to restrict ongoing business operations:

Since de Blasio’s appearance on Senator Sanders’s podcast, New York City’s lawsuit was dismissed from federal court in New York by Judge Andrew Keenan. Whether de Blasio’s comments influenced the outcome of the suit in any way is unknown, but the fact that they are in complete discord with what is stated in the City’s complaint is indisputable.

Amron’s affirmation that New York City’s goal is to “affect the bottom line” and destroy the industry altogether, just as de Blasio said, could also create challenges for New York City’s appeal of Judge Keenan’s decision, which is slated to begin in front of the U.S. Second Circuit Court of Appeals soon.

Listen to Amron’s comments in full by using the link below: