Skip to content
HomeItaly Calls Europe’s Bluff, And The Euro Loses Either Way

When Italy elected a bunch of rowdy populists back in March, the rest of the eurozone assumed (or at least hoped) that the weight of responsibility would bring Rome back into line. But so far the Italians appear to be serious about ending austerity and forcing the ECB to finance their spending ambitions. The just-passed Italian budget calls for a rising deficit, in direct disobedience of Continental (read German) authorities.

Now everyone involved is staring at some hard questions.

First, the European Central Bank – which for the past few years has bought up pretty much all the bonds issued by the Italian government at ridiculously low interest rates, thus allowing Italy to shamble along as a kind of sovereign zombie – stopped buying so many Italian bonds after the election in order to show Rome that actions have consequences.

As a result, the Italians have had to find other buyers for their debt, and the rates they’ve had to pay have soared. The 10-year bond yield, for example, has spiked from less than 1.8% in May to over 3% today. 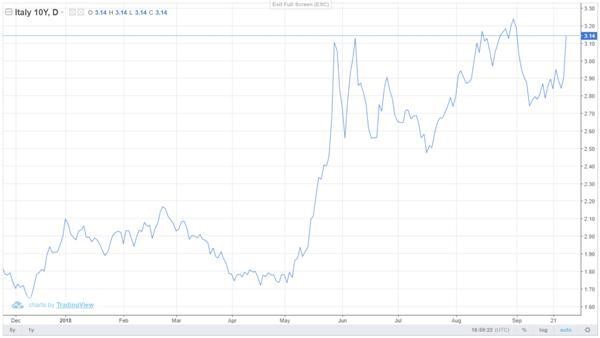 That means Italy’s interest expense is set to rise by at least one-third and probably quite a bit more going forward. This cost will be added to its already growing deficits, leading to more borrowing and higher interest expense, and so on, until rating agencies assign the government a junk rating. At which point everything falls apart. Here’s Goldman Sachs’ take:

(Bloomberg) — A downgrade of Italian debt to junk following higher budget spending plans could trigger a “sudden stop” in the supply of capital, according to Goldman Sachs Group).

The government’s announcement of a 2019 deficit above market expectations and potential increases to public debt will increase the risk of downgrades, which could see Italian assets decline further, Goldman said Friday. The three main ratings companies have Italy two notches above junk, with Moody’s Investors Service and S&P Global Ratings set to review the nation next month.

“A downgrade by one notch by one or more rating agencies would place further pressure on Italian assets,” wrote Silvia Ardagna, senior fixed-income strategist at Goldman. “A downgrade by more than one notch could lead to negative self-fulfilling debt dynamics; under this scenario a “sudden stop” in the supply of capital cannot be ruled out.”

A sudden stop would be akin to Italy being unable to obtain sufficient foreign demand for its bonds, marking a major deterioration in the country’s ability to borrow. Debt is currently equivalent to 130 percent of economic output, with the total stock ranking alongside France as the largest in the euro area. A two-notch downgrade is not Goldman’s base case.

While Italy’s 2.4 percent budget deficit target for 2019 fell below the European Union’s 3 percent limit, it could still put further strain on the country’s finances, especially if the projected level is overshot, according to Goldman.

A downgrade to junk would see the country’s bonds fall out of some benchmark indexes.

The only reason Italy isn’t already rated junk is because the rating agencies assume the ECB will step in to prevent a default. In that sense, Italian bonds are actually German bonds. But let the EBC abandon Italy to market forces, and the latter’s bond rating will find its natural level in short order.

But of course the ECB can’t do that, because a default by a major eurozone country would throw the whole common currency project into doubt, with consequences that can only be guessed at because nothing similar has ever happened.

But the ECB also can’t not do that, because enabling Italy’s runaway spending and borrowing will just open the door for Spain, Greece, Portugal et al to demand a similar deal, causing the façade of monetary discipline to evaporate and leading to a slightly different flavor of currency crisis, but a crisis nonetheless.

To sum up, the Fed is in a box, but the ECB is in an even tighter one.