Is Italy the new Greece? Read today’s article and find out what does the newest Italian turmoil imply for the gold market.

The recent days have been quite tumultuous in Italy. The turmoil started last week when the new government submitted its spending plans to the EU. The ruling coalition set Italy’s budget deficit at 2.4 percent of its GDP. The number is much higher than the current deficit which is set to be 1.5 percent of the GDP. The proposed difference between spending and revenue is also higher than 1.6 percent proposed by the country’s finance minister Giovanni Tria. So the number was above the expectations. Actually, it came as a shock, especially that the International Monetary Fund has projected it to fall to 0.9 per cent in 2019. Well, nobody expected the Italian inquisition.

Is Italy the New Greece?

Hence, the markets balked. Investors started to worry that Italy could be the next Greece. These fears are not unfounded, given Italian’s grim fiscal position. As the chart below shows, the country has run a budget deficit consistently over the past 20 years.

The inevitable consequence of the accumulation of deficits is the sky-high level of public debt in Italy. It already surpasses the country’s annual production being at 130 percent of the GDP. Only a few countries hold higher ratios of debt to GDP (yeah, Greece is within that elite club). And it goes without saying that the increase in budget deficit will not help to reduce that enormous indebtedness.

Not surprisingly, investors panicked and started to sell Italian bonds. After all, Italy is not the small Greece, but the eurozone’s third-largest economy and the EU’s fourth-largest economy, which accounts for about 11.3 percent of the union’s GDP. Thus, the Italian bond yields surged, as the chart below shows. 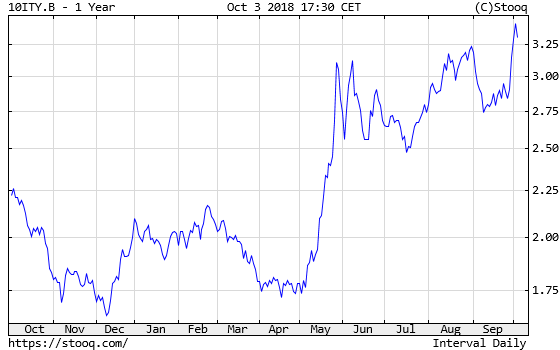 And the euro, which – as a political project – is very sensitive to political risk in European countries – dropped about 2 percent against the US dollar (see the chart below). 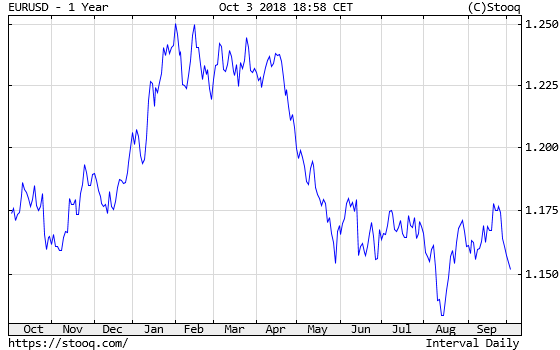 What does it all imply for the gold market? Well, the Italy’s irresponsible fiscal policy put the country in breach of the EU rules and risks another crisis in the eurozone, including potentially the breakdown of the common currency area. However, we are not here yet. The Italian tensions have had limited spillovers to other countries so far (just look for instance at the Spanish yields). And the Italian press reported yesterday that the government is planning to lower its deficit in 2020 and 2021. Although the spending plans are still much higher, there is willingness to get along with the Brussels and decrease the deficit in the coming years. The risk sentiment returned after these budget concessions. The Italian yields, the European stocks and the euro rebounded. If this sentiment stays, gold may be under pressure. Indeed, yesterday, the price of gold decreases, as the next chart shows.

However, Italy remains one of the biggest risks for the Eurozone economy. Investors should remember that the ruling coalition wants to increase social spending (“citizens income” for poor) and lower the retirement age. It will not boost the country’s productivity growth. Hence, Italy, with its massive debt pile, will remain completely unprepared when the next crisis hits. When that happens, gold should shine. But we have to wait a bit for that. Rome wasn’t destroyed in a day.