Towards the end of economic expansions, interest rates usually start to rise as strong loan demand bumps up against central bank tightening.

At first the effect on the broader economy is minimal, so consumers, companies and governments don’t let a slight uptick in financing costs interfere with their borrowing and spending. But eventually rising rates begin to bite and borrowers get skittish, throwing the leverage machine into reverse and producing an equities bear market and Main Street recession.

We are there. After a year of gradual increases, interest rates are finally high enough to start popping bubbles. Consider housing and autos:

Mortgage Rates Up, Affordability Down, Housing Party Over

The past few years’ housing boom has been relatively quiet, but a boom nonetheless. Mortgage rates in the 3% – 4% range made houses widely affordable, so demand exceeded supply and prices rose, eventually surpassing 2006 bubble levels in hot markets like Denver and Seattle.

But this week mortgages hit 5% …

…and people have begun to notice. Here’s an example of the resulting media coverage:

Some of us out there still remember when the average rate on the 30-year fixed mortgage hit 9 percent, but we are not the bulk of today’s buyers. Millennials, now in their prime homebuying years, may be in for the rude awakening that credit isn’t always cheap.

The average rate on the 30-year fixed loan sat just below 4 percent a year ago, after dropping below 3.5 percent in 2016. It just crossed the 5 percent mark, according to Mortgage News Daily. That is the first time in 8 years, and it is poised to move higher. Five percent may still be historically cheap, but higher rates, combined with other challenges facing today’s housing market could cause potential buyers to pull back.

“Five percent is definitely an emotional level inasmuch as it scares prospective buyers about how high rates may continue to go,” said Matthew Graham, chief operating officer of MND.

Home sales have been sliding for much of this year, and total annual sales are expected to come in lower than last year. Affordability is the clear culprit. With rates now more than a full percentage point higher than a year ago, that adds at least $200 more to a monthly mortgage payment for a $300,000 loan. It also knocks some borrowers out of qualification because lenders are strict on how much debt a borrower can carry in relation to his or her income.

Some recent headlines illustrate the sudden shift in housing sentiment:

Auto Sales Run Out Of Gas

For autos, it’s the same general story, as low interest rates – in the form of 0% financing and too-good-to-be-true lease terms – produced the highest sales ever in 2016.

But lately a couple of things have happened: Everyone who could possibly qualify for a 7-year car mortgage has done so, depleting the pool of potential buyers. And interest rates have risen enough to make it uneconomic for car companies to keep offering yesterday’s crazy-low rates. From today’s Wall Street Journal:

Car buyers on the hunt for a 0% financing deal are going to have to look harder.

Auto lenders are pulling back on the no-interest financing offers that had become widespread in new-car ads and dealer showrooms for much of this decade. Cheap financing reinvigorated the U.S. auto industry’s sales following the recession, helping to keep monthly payments affordable and draw buyers from the used-car market, where lending rates are usually higher.

But as interest rates rose, the cost of such deals has increased, pinching profits for car makers that finance vehicles through their lending arms and must pay the difference to keep the rate at zero for the customer. With U.S. auto industry sales slowing, car companies are turning to other types of sale incentives, such as cash rebates and discount lease rates, to lure buyers to showrooms, dealers and industry analysts say.

“For a long time, everything was 0%,” said Adam Lee, chairman of Lee Auto Malls, a dealership chain in Maine. At first, buyers could find 0% finance deals on 48-month car loans, and then auto lenders started extending those deals to 60-month loans and eventually 72-month loans, he said. “There are fewer and fewer of those deals now,” Mr. Lee added.

No-interest loans have become even scarcer, accounting for 3.4% of all new-car financing in September, down from 9.1% two years ago, J.D. Power said. 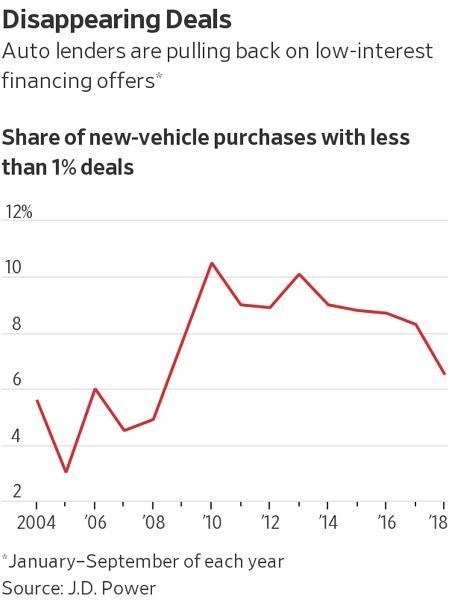 The average financing rate for a new-car purchase was 5.75% in the second quarter, up from 4.82% two years ago when auto sales were at their strongest, according to Experian Automotive.

“You’re definitely seeing the entire industry pulling back,” said Jack Hollis, general manager of Toyota North America, of the scaling back of interest-free auto loans. “Obviously, interest rates rising is a reality in the marketplace, and we’re going to react.”

As this post was being written, Ford announced an 11% drop in monthly sales.

To sum this up, millions of Americans who were happily signing on the dotted line because of irresistibly cheap financing are done with that kind of thing. The companies selling cars and houses to these people are now desperately trying to cut their expenses to fit their much lower year-ahead sales projections. Those companies’ suppliers are scaling back in response, and so on down the line as two major industries go from boom to bust.

Housing and autos aren’t the only ones hitting a brick wall of higher interest rates. Lots of other businesses depend on their customers’ ability and willingness to borrow. They’ll be the subject of future posts in this series.