Skip to content
Home‘We Still Don’t Understand the Superstorms of the Anthropocene’… The Stupid, it Burns

From some SJW rag, via Real Clear Politics…

We Still Don’t Understand the
Superstorms of the Anthropocene

Hurricane Michael is a harsh example of hurricanes of the Anthropocene—a bizarre chapter of earth’s history in which human activity is causing changes to the climate, the likes of which we’ve never seen in the history of our species, and at a speed that’s unprecedented in the history of our planet.

According to LinkedIn, Ms. Haskins actually has a degree in something that doesn’t exist:

Regarding the hurricane-related deaths in Virginia…

RICHMOND, Va. — Officials said Saturday that there are now six confirmed Michael-related fatalities in the Commonwealth after a missing woman’s body was recovered in Charlotte County.

Allen and her son, 36-year-old Ronnie Allen Jr. were swept away in the flash flood over the bridge.

Neither survived the incident, but deputies were able to rescue Ronnie Allen’s 17-year-old son.

“I want to commend the incredible number of volunteers who came out to assist with the search efforts for Ms. Allen today,” Charlotte County Administrator Dan Witt said. “We are thankful for the hard work and long hours put forth by our volunteer fire and EMS personnel, the Charlotte County Sheriff’s Office, the Virginia State Police and the Virginia Department of Emergency Management. We keep the Allen family in our thoughts and prayers as they seek comfort and peace in the wake of this very tragic situation.”

Additionally,  Hanover firefighter Lt. Brad Clark was killed and three other firefighters injured after their firetruck was rear-ended on I-295 in Hanover County Thursday night.

There was also a confirmed drowning death in Pittsylvania County due to flashing flooding. Forty-five-year-old James E. King Jr., of Dry Fork, Va., was killed when his vehicle got swept away by floodwaters.

The were two more confirmed deaths attributed to the storm in the City of Danville.

Hurricane Hazel was the deadliest and costliest hurricane of the 1954 Atlantic hurricane season. The storm killed at least 400 people in Haiti before striking the United States near the border between North and South Carolina as a Category 4 hurricane. After causing 95 fatalities in the US, Hazel struck Canada as an extratropical storm, raising the death toll by 81 people, mostly in Toronto. As a result of the high death toll and the damage caused by Hazel, its name was retired from use for North Atlantic hurricanes.

From the National Weather Service: 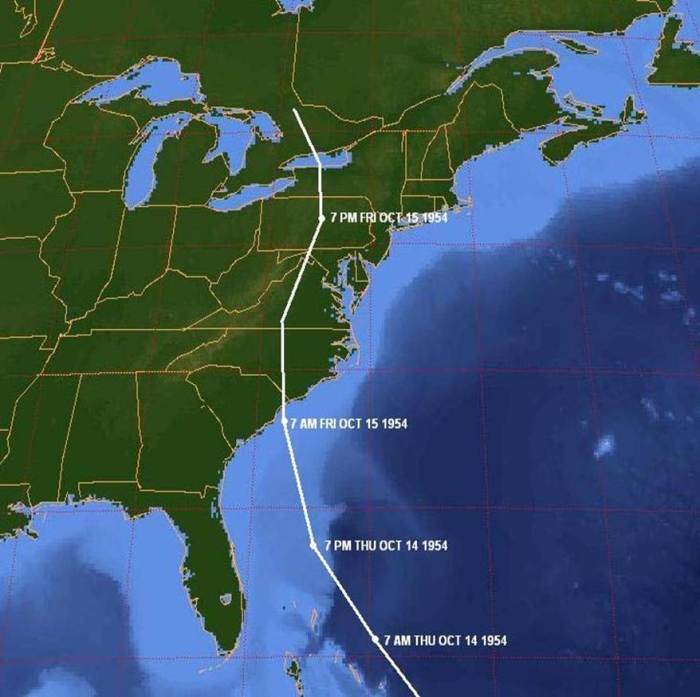 Toronto is about 900 miles inland from Hazel’s landfall, which occurred during the mid-20th Century cooling period. Dr. Ryan Maue’s historical hurricane graphs only go back to 1970; but they demonstrate no trend of increasing hurricane frequency or intensity  since the onset of mild global warming after the Pacific Climate Shift of 1976. 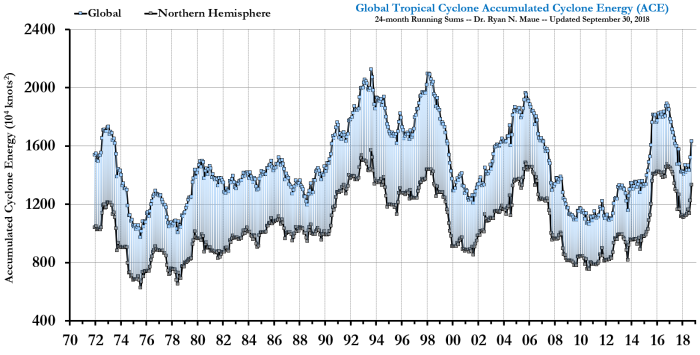 Added bonus: Bill Maher making an ignorant @$$ of himself

On Friday’s broadcast of HBO’s “Real Time,” host Bill Maher criticized the media for not giving attention to climate change increasing hurricane strength during their coverage of Hurricane Michael.

Maher said, “First of all, we feel bad for the people who got hit by the hurricane, of course. We wish them the least pain possible, but anytime there’s a hurricane, the news turns into a wet t-shirt contest. … And what pisses me off is that what’s souping up the hurricanes gets less coverage. Hey media, link those two, as long as you’re out there in the storm. Link them.”