The economy depended on the spending habits of baby boomers the last three decades.

The success and failure of many companies depended on the spending habits of those same baby boomers.

It was all about the baby boomers.

But that is no longer the case.

You must pay attention to the Millennial Generation (those born 1981-2000) right now. And here’s why…

The most recent U.S. Census indicated that millennials already outnumber baby boomers by more than 15 million.

As you can see in the chart below, the young demographic (the millennial generation in red) has taken over as the largest population group from the baby boomers. 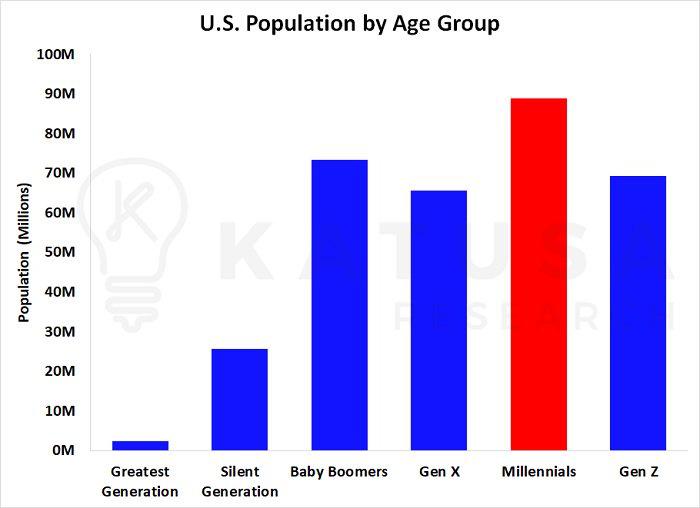 Today, investors want to invest in an industry with super-fast growth that has a large young audience of Millennials. And let’s not forget the next up and coming population group – Generation Z (those born in 2001 and later).

According to data compiled by Bloomberg, Generation Z will overtake the millennials in population number sometime by 2020. 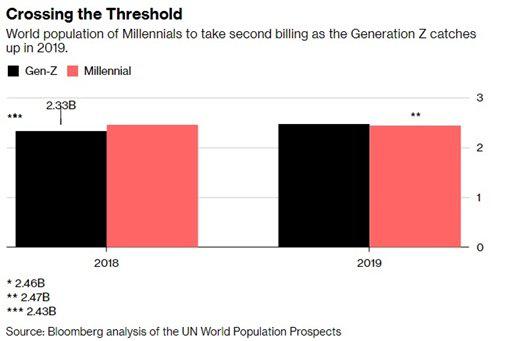 The shift in numbers from boomers to millennials and eventually to generation Z comes with a massive shift in dollars.

While baby boomers’ spending is being phased out, millennials’ spending is rapidly taking over as the driving force of the economy.

I see this generational “changing of the guard” happening in my own office.

For the first 15 years of my career, I was the “young gun” in the resource sector.

Now that I am one of the largest financiers in the industry, I find myself the oldest person in my own office and have the grey hair to match.

Everyone else in my office is a millennial.

And the nominal spending power at their respective ages is the highest of their peer generations.

As the chart below shows, millennials account for a bigger share of the spending on cell phone services, eating out, and transportation than the baby boomers and Gen X-ers do. 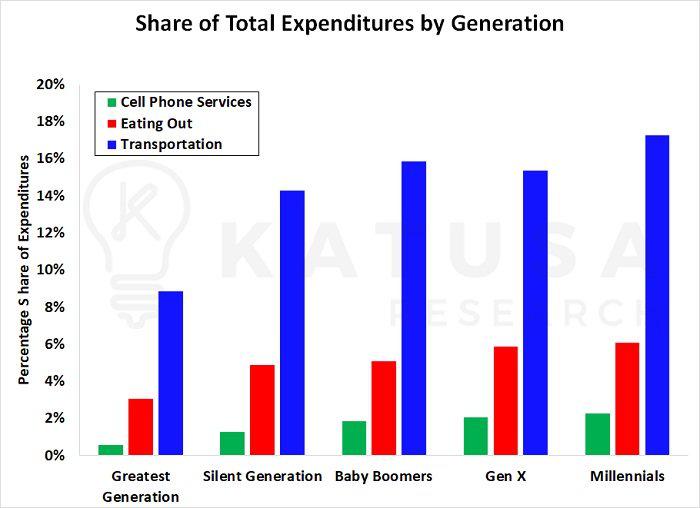 Anyone not paying attention to the economic rise and coming spending power of millennials and Gen Z will regret it.

It’s one of the greatest cultural, demographic and economic shifts in history.

Think of Blockbuster CEO Jim Keyes, who made a bold statement to Motley Fool in 2008:

“Netflix is not even on the radar screen in terms of competition.”

Netflix was a tiny company at the time. Only trading at about $4 a share.

But Mr. Keyes wasn’t paying attention to the beginnings of a massive demographic, technological and cultural shift. One that would see millennials cutting the cord and turning to subscription-based streaming video.

Within two years, Blockbuster was bankrupt.

People who missed out on the Netflix rocket ship regret not seeing the direction millennials were moving earlier.

Fortunately, they’ll get another chance.

And it’ll likely be even bigger this time.

Millennials are Disrupting the Status Quo

But thanks in large part to the relationship habits of millennials, the U.S. divorce rate has been sliced by 18% from 2008 to 2016. 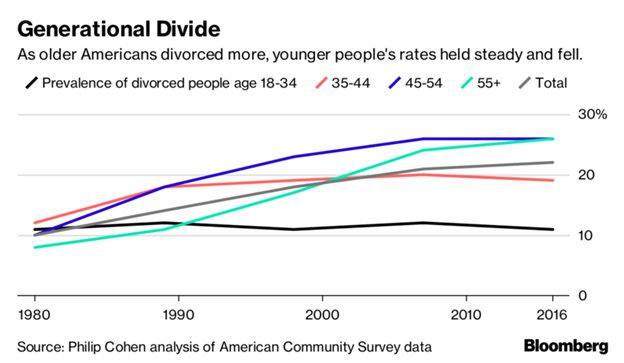 Millennials are taking their time to get married.

But that’s not all…

What’s Next for the Millennial Generation – Prepare to Profit

By now you’re asking yourself this:

“How the hell do I spot and make money from all these trends and disruption of the status quo over the next 10-20 years?”

Next week Katusa Research will release a series of editorials in our Prepare to Profit Series.

It will cover one industry that is rapidly emerging as the next big bull market.

It’s a market where crypto was in 2016, meaning few even knew it existed.

Now, I bet you’ve wished you had a chance to go back in time and load up on cryptos and weed stocks.

I bet you wished you could get up to speed quick and deploy capital in some quality investments in those sectors, at the time.

Because I will reveal what this emerging sector is and also my favorite pick.