Wall Street shills are in near perfect agreement that the bond market is not in a bubble. And, even if there are a few on the fringes who will admit that one does exist, they claim it will burst harmlessly because the Fed is merely gradually letting the air out from inside. However, the fact that we are in a bond bubble is beyond a doubt—and given the magnitude of the yield distortions that exist today, the effects of its unwinding will be epoch.

Due to the risks associated with inflation and solvency concerns, it should be a prima facie case that sovereign bond yields should never venture anywhere near zero percent—and in some cases, shockingly, below zero percent. Even if a nation were to have an annual budget surplus with no inflation, it should still provide investors with a real, after-tax return on government debt. But in the context of today’s inflation-seeking and debt-disabled governments, negative nominal interest rates are equivalent to investment heresy.

At its peak in 2016, there was a total of over $14 trillion worth of global sovereign bonds with a negative yield—mostly in European and Japanese debt. And even though that total has decreased recently, it is still above $8 trillion. 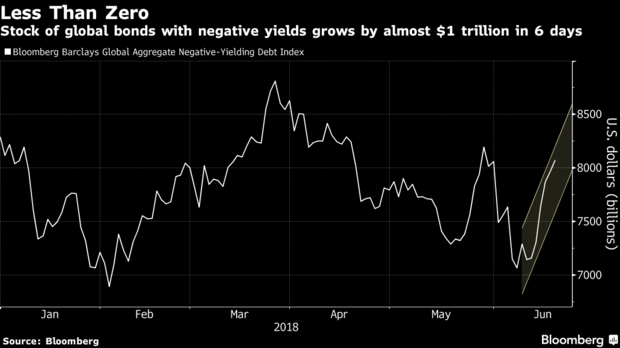 And although the U.S. Ten-year Treasury note yield has never been negative in nominal terms, it is still clearly in the sub-basement of history.

Given these facts, any free-thinking individual must assent that the global bond market is in a bubble. This situation may be definitely worse overseas, but the U.S. bond market still suffers from the same contagion. Given our trillion dollar annual deficits, a national debt that is $21.5 trillion (105% of GDP), and consumer price inflation that is above the Fed’s 2% target, the abnormality in U.S. rates is completely absurd.

The key to this whole discussion about bonds being extraordinarily overvalued is the arrival of inflation on to the scene, which had been absent for a decade in the eyes of the consumer because it was mostly sequestered within stock, bond and real estate prices.

But because of central banks’ inflation “successes,” along with the additional $70 trillion worth of debt levels worldwide since the Great Recession, interest rates have recently started to rise. This has compelled many central banks to shift strategies from the pursuit of inflation, to one of inflation containment.

Importantly, this change from central banks is not a voluntary decision, unlike what the Wall Street carnival barkers would have you believe. In other words, rates are not rising for all the right reasons. But instead, they are rising due to runaway asset prices, surging debt levels and the resurgence of rising consumer prices. Therefore, these money printers have no choice but to retreat from their inflation quest, or they now risk a rapid and destructive rise in long-term bond yields.

Hence, global central banks are trying to stick the inflation landing by hoping CPI stays near the 2% percent level and praying interest rates nestle into a tight trading range that remains completely harmless to this overleveraged economy.

However, this is diametrically opposed to the very nature and construction of asset bubbles. Think about the last two examples of the NASDAQ crash in 2000 and the Real Estate debacle in 2008. These asset bubbles—just like all the others in history–needed a constant supply of new monetary fuel to stay inflated. The Fed inverted the yield curve shortly before each crash and cut off banks’ profit motive to lend. Not only this, but these assets became so inflated relative to incomes and the underlying economy that investors were no longer capable of throwing new money at them.

Once stock and home prices began to roll over, there was a panicked rush for the exits. This is primarily due to the massive leverage involved with these bubbles. Owning assets on margin and with excessive debt is very expensive and only makes sense in a raging bull market. As soon as the tide turns, the offers begin to pile up quickly and exacerbate the move lower in prices.

The bigger the distortion of asset prices the greater the reset will be. And the warping of interest rates courtesy of global central banks has never been anywhere near this extraordinary. What Mr. Powell, and the rest of the central bank leaders fail to grasp, is that asset bubbles contain tremendous potential energy and are virtually impossible to unwind innocuously.

The Fed is trying to engineer a soft landing for the bond bubble it created, but no such condition is at all probable. If the Fed Funds Rate (FFR) was already close to its mean of around 6.5%, then perhaps this would be a possibility. However, at the current FFR of just 2.25%, it is far below the average and nowhere near the so-called equilibrium rate–where it is neither a stimulant or depressant for the economy—especially in light of the fact that no such condition of interest rate nirvana can ever be supplied by a central bank.

Therefore, herein lies the rub: if the Fed were to stop raising the FFR at the current level, there is a significant risk that long-term interest rates would explode higher on the back of surging debt levels and rising inflation. That would cause debt service payments to skyrocket and lead to mass insolvencies for consumers and corporations; just as it put extreme fiscal pressure on all levels of government.  And, if the Fed were to continue on its path towards interest rate and balance sheet normalization, short-term rates will rise, and the credit-fuel supporting asset bubbles will get slammed shut. Thus, forcing the economy into a steep recession/depression from which there will be no easy escape.

History conclusively dictates that asset bubbles never correct with impunity; they leave a wake of carnage behind them commensurate with the extent of the previous imbalances. The worldwide and unprecedented bond bubble will certainly not be the exception to this empirical fact.