Brazil’s right-wing presidential candidate Jair Bolsonaro appears ready to ride an anti-corruption wave into power. Bolsonaro came only four points short of winning the presidency outright on Oct. 7. He now faces leftist Workers’ Party candidate Fernando Haddad, who received 29 percent of the first-round vote, in an Oct. 28 runoff. Polling shows Bolsonaro comfortably ahead. A scandal at Brazil’s state oil company Petrobras in 2014 swept aside many potential candidates who otherwise would have posed a significant challenge to Bolsonaro, and his populist assurances to be tougher on corruption than his Workers’ Party predecessors are resonating with voters, despite the relatively vague anti-corruption platform he has put forward. [Bolsonaro has won the Presidency 55% to 45%. -Bob]

Brazilian voters made their anti-corruption demands felt at the polls on Oct. 7. The populist candidate Jair Bolsonaro, who has promised a harder hand against corruption in the country’s politics and private sector, fell just short of winning the presidency outright and will face Workers’ Party candidate Fernando Haddad in an Oct. 28 runoff. But turning broad public sentiment against corruption into policy capable of delivering results may prove elusive for Brazil’s next administration.

Whoever wins the election will enter office with a mandate to pursue stronger measures to investigate and penalize corruption. However, the next administration may find it difficult to match the pace of the indictments and prosecutions of the Petrobras investigation. The politicians and business figures involved in the Petrobras scandal (also referred to as Operation Car Wash) were interconnected by illicit transactions, which made it easier for investigators to take down one figure after another. The prosecutors and judges investigating the scandal were also particularly committed to pressing the case forward despite government opposition. They also were adept at timing leaks of information to the media to maintain public interest in the case. But because voter sentiment against corruption is strong enough, Brazil’s next president will make countering corruption a central part of his administration and probably will consider the successful pursuit of anti-corruption policies crucial to securing a second four-year term in 2022. 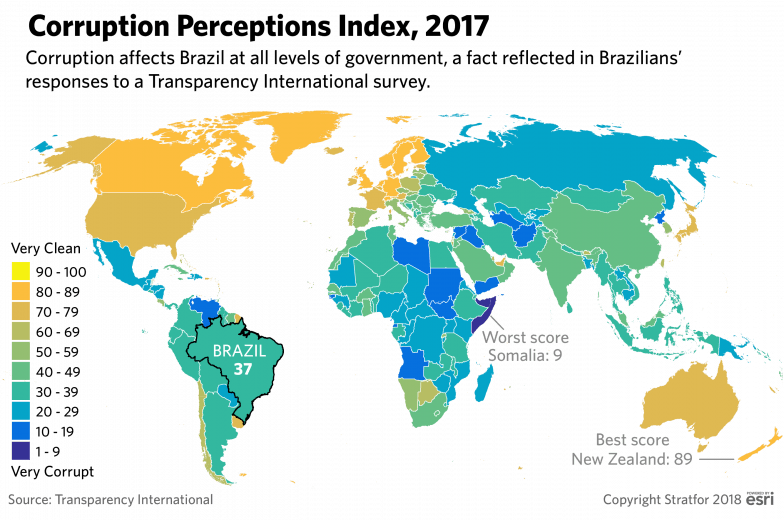 The chance that Brazil’s government will lose its recent gains against corruption is a real concern. So far, the lingering effects of the Petrobras investigations likely make politicians and members of the private sector wary of engaging in kickback schemes to the extent that those involved in the Petrobras scandal did. They likely perceive engaging in such activities to be a far higher risk than ever before after Brazilian prosecutors indicted and imprisoned legislators, CEOs and even former President Luiz Inacio Lula da Silva. While the success of the Petrobras scandal may mitigate corruption in the short-term, its effect will decline over the long run unless the next administration presses forward with creating new institutions and mechanisms that make it more likely that high-level corruption will be detected and prosecuted regardless of who is investigating such cases.

Both Bolsonaro’s and Haddad’s political platforms focus more on changing legislation to slowly reduce opportunities for corruption rather than crafting new mechanisms to aggressively pursue it. There is no proposal from either candidate, for example, to significantly improve the government’s investigative capabilities by creating an independent body to focus on corruption cases, as was the case until recently in Guatemala. Bolsonaro’s anti-corruption policy ideas are largely limited to reopening debate on a set of 10 proposals that never cleared the National Congress. Those proposals mainly increased criminal penalties for suspects convicted of corrupt activities to dissuade would-be criminals. They did not actually commit the government to increase its capabilities to detect and prosecute corruption. Haddad’s anti-corruption proposals are similarly focused on increasing penalties on those convicted of corruption and eliminating their opportunities for leniency. Haddad also favors judicial reform to create more oversight of tribunals charged with inspecting government finances. 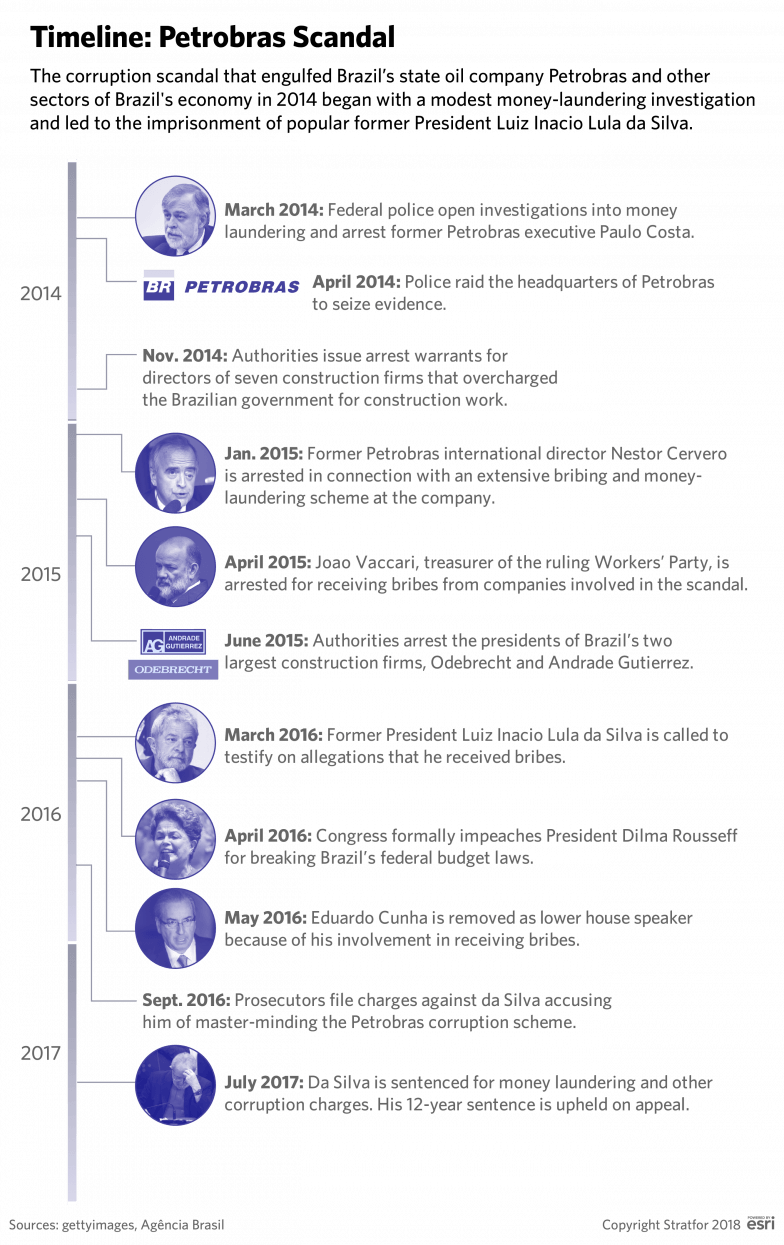 Whether the next administration will shift beyond these indirect means of dissuading corruption to take a more direct approach remains an open question. The success of the Petrobras corruption case was largely a matter of determined prosecutors and judges maintaining pressure on a wide-ranging corruption network. Keeping up the fight against corruption across Brazilian society, even after the investigation and indictments related to the Petrobras investigation begin to dwindle, probably will require increasing the federal government’s investigative and enforcement capabilities by hiring more investigators and giving them greater legal powers. It is here that the constraints will begin to pile up on the next president. Though he will have a broad mandate to act against corruption, whether he moves toward putting more effective anti-corruption mechanisms in place will largely depend on the available funds, government priorities and political will to do so.

As the next president’s anti-corruption strategy takes shape, he will have to contend with several key constraints. First, in austerity-minded Brazil, funding priorities will clash with expanding the government’s writ against corruption. Emerging from a two-year recession, Brazil’s public finances remain shaky, with a federal government budget deficit roughly equal to 8 percent of the nation’s $2 trillion gross domestic product. Brazil’s debt-to-GDP ratio is also quite high, at 80 percent. Brazil is a huge nation with a complex network of federal, state and local institutions rife with corrupt activities. Creating institutions actually capable of more frequently detecting instances of corruption and reliably prosecuting them could add hundreds of millions of dollars — if not billions — to public expenses.

Time and the political will of Congress are other obstacles the new administration will have to overcome. Though corruption will be a crucial part of the next president’s platform, it will be but one of numerous competing priorities. As the administration considers how it will respond to public demands for greater action against corruption, it will also have to determine spending priorities so it can narrow the budget gap, decide whether to adjust its customs union charter to allow member states greater freedom to make their own trade policies and potentially even decide whether to enact controversial social policies — such as lowering the age of criminal responsibility if Bolsonaro is elected. Fulfilling each of these priorities will require politically sensitive, lengthy congressional debates and careful negotiations between the president and Brazil’s fractured Congress. The administration may not have enough time on its hands to successfully create more effective anti-corruption bodies from scratch, particularly if it’s contending with more-pressing spending and trade issues made even more contentious and cumbersome by domestic political and economic factions in Congress. 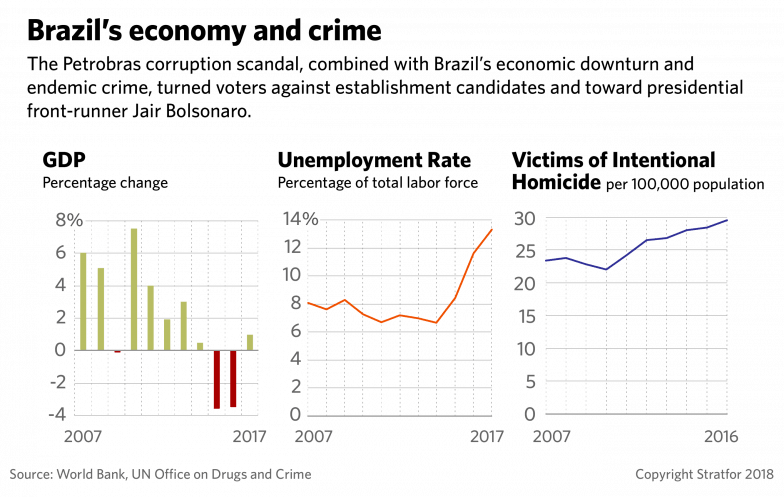 So how will these constraints shape the next administration’s anti-corruption policies? If the administration quickly becomes embroiled in other issues, such as lengthy congressional negotiations over federal spending, foreign trade policy or controversial anti-crime initiatives, then congressional efforts to enact deep anti-corruption reform will fall by the wayside. This doesn’t mean the administration will ignore its anti-corruption mandate. But it probably will reduce the scope of any anti-corruption plan to as the administration seeks legislation it can enact relatively quickly and with little resistance in Congress. For example, instead of trying to plan for and enact a deep reform to increase federal investigative capabilities, Brazilians might see the government pursue more modest reform along the lines of what Haddad and Bolsonaro already have called for. In this scenario, the government would move to tighten penalties for corruption with the intent of dissuading and prosecuting future criminals, but its fundamental capabilities to root out corruption would not significantly improve.

Brazil’s next president will come to power with strong public support to press on with the fight against corruption. But deepening the government’s ability to target corruption will probably require expanding the federal bureaucracy that investigates and prosecutes corruption — a difficult task in an austerity-minded country with a divided Congress. The next government will almost certainly make anti-corruption measures a central part of its political platform, but it may not be able to create new institutions to target corrupt activities. Instead, it may have to settle for more modest reform, such as amending laws to more seriously penalize those convicted through the existing institutions.