Back in 2014 oil was falling and hundreds of billions of dollars of energy junk bonds and leveraged loans looked to be at risk. Wolf Street had this to say at the time:

The price of oil has plunged nearly 40% since June to $65.63, and junk bonds in the US energy sector are getting hammered, after a phenomenal boom that peaked this year. Energy companies sold $50 billion in junk bonds through October, 14% of all junk bonds issued! But junk-rated energy companies trying to raise new money to service old debt or to fund costly fracking or off-shore drilling operations are suddenly hitting resistance.

And the erstwhile booming leveraged loans, the ugly sisters of junk bonds, are causing the Fed to have conniptions. Even Fed Chair Yellen singled them out because they involve banks and represent risks to the financial system. Regulators are investigating them and are trying to curtail them through “macroprudential” means, such as cracking down on banks, rather than through monetary means, such as raising rates. And what the Fed has been worrying about is already happening in the energy sector: leveraged loans are getting mauled. And it’s just the beginning. 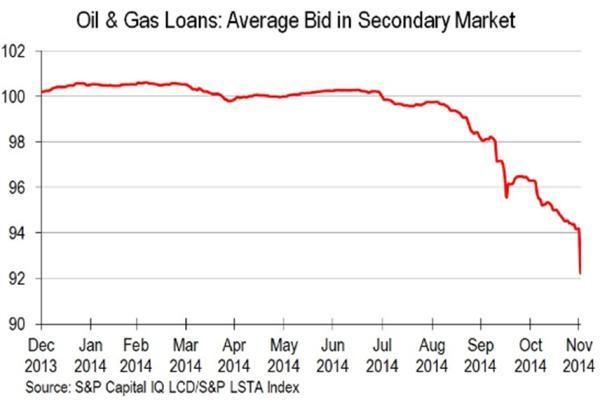 Nothing much came of this. Oil prices stabilized and started to rise, and the drillers went back to borrowing and pumping. The price of oil eventually rose to a hugely profitable $76/bbl, turning America’s oil patch back into a “miracle” destined to make us energy independent for eternity. And energy junk bonds were once again safe for widows and orphans.

Still, at first this was not a problem. From Bloomberg five days ago:

Oil may have lost its grip on U.S. junk bonds.

As crude fell for eight straight days through Nov. 7, the longest streak since 2014, high-yield bonds — typically influenced by the price of oil — actually gained. And further, junk debt has barely suffered a scratch as West Texas Intermediate has fallen 20 percent from a four-year high at the start of last month.

During oil’s plunge, high yield debt dropped around 1.2 percent, while junk tied to energy lost about 2.7 percent, data compiled by Bloomberg show. A similar reaction happened during crude slumps earlier this year, even though energy accounts for about 15 percent of the U.S. high yield index.

The muted reaction may be because junk didn’t rise as much as oil this year, and producers survived recent lean years, when crude traded as low as $26 a barrel. However, the bonds may eventually respond.

“It may not be falling as oil goes from $75 to $60 because it didn’t really rally very much as oil went from $60 to $75,” said Spencer Cutter, Bloomberg Intelligence U.S. credit analyst. “If we start to flirt with $55, I think there is a good chance that you will see a real reaction in the bond market.” 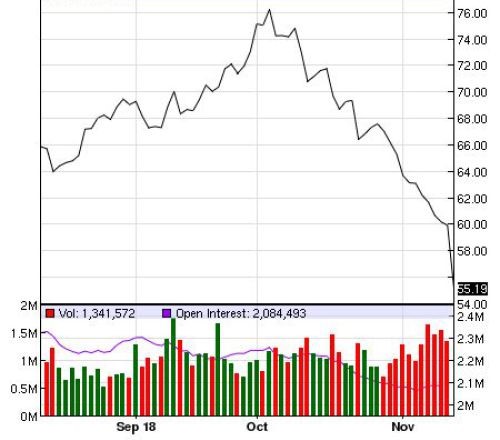 Now the question is, what would constitute a “real reaction” in the junk bond and leveraged loan markets? And will the impact be felt beyond the energy patch?

In any event, it’s definitely one more thing to worry about in addition to trade war, apocalyptic California fires and falling stock prices. Which means the real question is, when does the cumulative weight of all these mini-crises change market sentiment from insouciant to terrified?