There are two ways of looking at the intersection of debt and population. One way says that if debt is rising population should also rise to allow future workers to pay for the retirement of today’s. More people thus make debt easier to manage.

The other point of view is that debt and population soaring simultaneously creates a negative feedback loop that eventually destroys a culture.

Today’s Latin America appears to validate the second thesis. Debt and population are both soaring, and big parts of the culture seem to be collapsing. 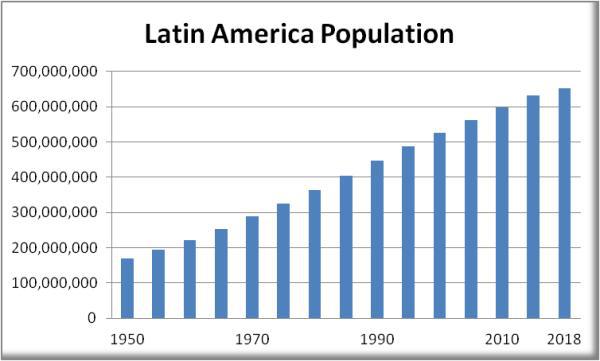 The next chart shows the government debt of Brazil, Latin America’s largest economy, spiking since the end of the Great Recession:

As for the culture collapsing, consider this (rather grisly) excerpt from today’s Wall Street Journal:

In Latin America, Awash in Crime, Citizens Impose Their Own Brutal Justice

The 16-year-old had spent a balmy Saturday afternoon in May with his high school friends at a funk music party in Brasília’s central park, not far from the country’s presidential palace.

As he headed home shortly after sundown, someone in the crowd grabbed his classmate Ágatha from behind and snatched her phone, witnesses told police. She spun around and saw Victor. Believing him to be the thief, she screamed out for help. Her friends knocked him to the ground and began to beat him.

Hearing Ágatha’s shrieks, another group of partygoers presumed he must be the same teen who had swiped a pair of sunglasses from them earlier. One of them jammed a broken bottle into Victor’s stomach. A young blond woman known as Apple punctured him repeatedly with what police believe was a screwdriver, skewering the muscles between his ribs. A man then plunged a knife into his heart.

In the half-hour it took the group of 20 mostly high-school students to kill Victor, no one searched him for the stolen items. Another 100 or so partygoers looked on and did nothing, investigators said.

“Die, you asshole,” one onlooker can be heard saying in a video recorded on a witness’s cellphone, as paramedics later tried in vain to resuscitate Victor, hunched over his limp corpse.

Lynching is Latin America’s dark secret. The region has the world’s highest murder rate, and its highest rate of impunity. Some countries including Brazil solve just 1 in 10 murders. With little faith in the police or the courts to bring criminals to justice, mobs routinely kill suspected lawbreakers in spontaneous attacks.

In Brazil, mobs now kill—or try to kill—more than one suspected lawbreaker a day, according to University of São Paulo sociologist José de Souza Martins, Brazil’s leading expert on lynchings. That figure is both the highest in the world, and more than at any point in Brazil’s history, he said.

While Latin America is known for its hardened drug cartels and street gangs, the region’s lynch mobs are made up of ordinary, otherwise law-abiding citizens, from school students to old ladies. They kill with the same grisly cruelty, sometimes mutilating victims’ sexual organs in cases of suspected rape, or burning them alive in broad daylight.

Lynchings typically follow the same ritual across Latin America. A group of friends, relatives or neighbors witness a crime or hear about one over the messaging service WhatsApp. They hunt down the suspect and drag him to a public place, where they torture and kill him with whatever weapons are at hand, from kitchen utensils to scythes from the harvest.

In April, Amazonian villagers in Peru dragged a Canadian tourist along the ground by a noose around his neck before killing him, believing him to be guilty of the murder of a local shaman.

An enraged mob in Mexico set a 21-year-old man and his uncle on fire in August, mistaking them for child snatchers. A video of the incident shows a crowd gathered around while men take turns pouring gasoline on the pair until their charred corpses stopped moving.

Bold Lynchings are rarely a response to a single crime, researchers say. Rather, the crimes are simply the last straw for a community living in fear of endemic violence.

Latin America Is the Murder Capital of the World (Sept. 20)

In Acapulco, ‘Hell Is Overlapping With Paradise’

Why Are People Fleeing Central America? A New Breed of Gangs Is Taking Over.(Nov. 2) 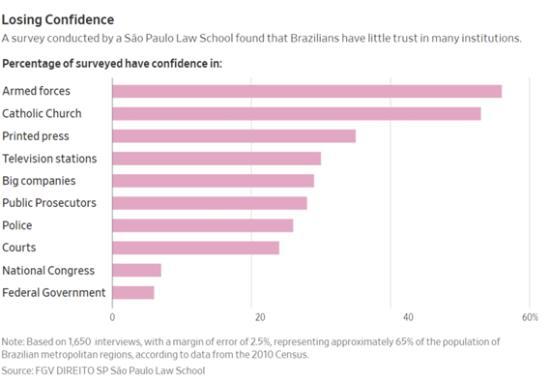 Latin America accounts for a third of the world’s murders—about 400 a day, with almost half of them in Brazil. Yet throughout the region, less than 20% are solved. The numbers are even worse in Brazil and Mexico, where more than 90% of murderers escape conviction. In São Paulo, the region’s biggest city, more than half of victims from armed robberies don’t even bother reporting those crimes to the police, according to a study by Insper, a Brazilian business school.

When justice is done, it can be infuriatingly slow. Brazil’s Supreme Court, the last resort for even mundane disputes, currently sits on about 44,000 cases dating back to 1969.

These countries didn’t get much of a return on their past borrowing, and their mounting debts will make it ever-harder to hold civil society together in the future.