Skip to content
HomeFed Tightening Is Over: Markets Now Expect Cuts In 2019

People who assumed the Fed, along with the rest of the government, would cave the minute the financial markets got a little choppy turned out to be right. A couple of bad months and the “normalization” of both interest rates and the Fed’s balance sheet have stopped cold. Now the markets expect falling rates and (apparently) rising asset purchases. From today’s Wall Street Journal.

Signs that the Federal Reserve may be done with its yearslong campaign to raise interest rates are sending ripples through fixed-income markets. 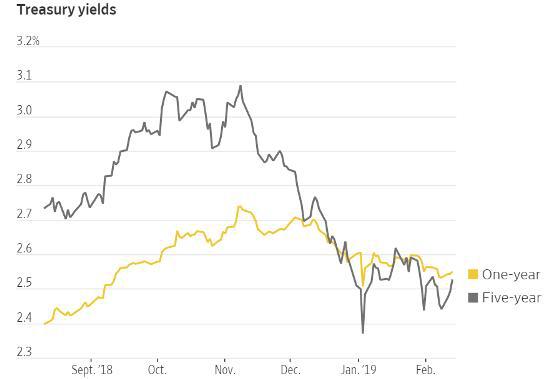 The Fed’s latest policy stance has kept a lid on U.S. Treasury yields, which play a major role in setting borrowing costs across the globe. It has provided a large boost to corporate bonds, particularly those that mature over roughly five to seven years, pulled down mortgage rates and helped spark a shift in demand to fixed-rate debt from floating-rate debt.

Seizing on the buoyant tone of the market, blue-chip companies AT&T and Boeing sold a combined $6.5 billion of bonds on Wednesday. That followed an $11.5 billion sale from Altria Group Tuesday and a $15.5 billion bond-sale from Anheuser-Busch InBev SAin January.

Taken together, recent moves show investors are confident that the Fed is done raising rates and that its shift to a more market-friendly posture can propel the economic expansion into a second decade even as concerns persist about slowing global growth and geopolitical tensions.

While that could stick some investors with losses if inflation picks up and the Fed pivots back toward a more aggressive monetary policy, several analysts said that the balance of risks has clearly shifted for investors, allowing them to more confidently take bets that may previously have seemed imprudent.

“Take the world that we were in over the past five years and flip it upside down,” said Gennadiy Goldberg, U.S. rates strategist at TD Securities in New York.

For the Fed, the risk that another rate increase could cause significant economic harm outweighs the risk that not raising rates could lead to slightly higher inflation, Mr. Goldberg said. For investors, there is a growing opportunity cost to not owning bondsparticularly those that are more sensitive to changes in interest rates since rates seem more likely to fall than to climb higher.

Central banks raising interest rates pose one of the biggest threats to debt investors, causing prices of existing bonds to fall to adjust for the higher rates on new bonds.

The Fed’s policy turn has been good for most bonds, helping keep Treasury yields low despite a recent surge in riskier assetssomething that often depresses appetite for ultrasafe government debt. The yield on the benchmark 10-year U.S. Treasury note closed Wednesday at 2.706%, up from 2.557% on Jan 3the day before Fed Chairman Jerome Powell telegraphed the Fed’s shift at a conferencebut still well below the multiyear highs around 3.2% it touched in November.

Low Treasury yields are a boon for stocks because they hold down borrowing costs for companies and push some yield-seeking investors out of government bonds and into other types of assets. They also could provide a lift to the housing market, which hit a rough patch in 2018 partly because of rising mortgage rates.

Corporate bonds have fared even better than Treasurys, a result both of the diminished threat of interest-rate increases and the improved economic outlook now that the Fed has shifted to a more accommodative monetary policy.

The average extra yield, or spread, that investors demand to hold investment-grade corporate bonds instead of Treasurys has dropped 0.32 percentage points since its peak on Jan. 3retracing about 60% of its widening in the last three months of 2018. Speculative-grade bonds have received an extra boost as investors have shifted money out of junk-rated loans, the coupons of which rise and fall with Fed-dictated interest rates.

The Fed’s shift also has caused some investors to move money from short-term bonds into slightly longer maturities. The five-year U.S. Treasury note now yields less than the one-year Treasury billan indication investors think the Fed will start cutting interest rates within the next few years. Since Jan. 3, the average spread on investment-grade corporate bonds maturing in five to seven years has tightened more than the spread on one-to-three-year bonds or bonds maturing in at least 10 years.

Prices of bonds with longer maturities tend to fall more when their yields rise than shorter-term bonds do, typically making short-term corporate bonds a safer bet when the Fed is raising rates.

In recent weeks, five-year bonds have outperformed two-year bonds because “people aren’t as fearful of yields rising dramatically,” said Jeff Given, a portfolio manager at Manulife Asset Management, who favors corporate bonds over Treasurys because he doesn’t foresee a “big risk-off trade that is going to make Treasurys attractive.”

This illustrates the box the Fed is in: If caving to the stock market re-energizes the bond market, leading corporations to increase their already record-high debt load, that will boost economic growth while raising both inflation and commodity/real estate prices thus forcing the Fed to go back to tightening, thus causing chaos in the financial markets, thus forcing the Fed to back off and return to easing. And so on, with each iteration ratcheting up overall leverage in the economy.

Put another way, we’re now recapitulating the booms and busts of the past 40 years on internet time. Where previous cycles for example the second half if the 1990s with its myriad bail-outs and ever-expanding tech stock bubble  took five or more years, the new version takes just one year.

The question then becomes, how many of these truncated New Age financial cycles will it take to reach peak capitulation, with never-ending ease and ever-rising inflation. One reasonable prediction: The coming year of lower rates and renewed QE will combine with promises of aggressive fiscal ease in the 2020 presidential election to send us off that cliff.