We have written numerous articles about capital consumption. Our monetary system has a falling interest rate, which causes both capital churn and conversion of one party’s wealth into another’s income. It also has too-low interest, which encourages borrowing to consume (which, as everyone knows, adds to Gross Domestic Product—GDP).

At the same time, of course entrepreneurs are creating new capital. Keith wrote an article for Forbes, showing the incredible drop in wages from 1965 to 2011. There was not a revolution, because prices of goods such as milk dropped at nearly the same rate. The real price of milk dropped as much as it did, because of increased efficiency in production. The word for that which enables an increase in efficiency is capital.

Or, to put it another way, capital provides leverage for productive human effort. We don’t work any harder today, than they did in the ancient world (probably less hard). But we are much richer—we produce a lot more. The difference is capital. They had not accumulated much capital. So they were limited to brute labor, to a degree which we would find shocking today.

We have long had machine power to do most of the heavy lifting. For a few decades, we have had computers to perform much of the tedious number-crunching (you would be surprised how much number-crunching is involved in typing an article in a word processor). And computers also automate everything from manufacturing lines to business processes.

More recently, mobile computers and wireless networks have allowed us to efficiently organize markets, index a big fraction of everything ever published, and allocate resources such as cars to pick us up wherever we may be, and drop us off somewhere else.

Capital allows us to do more, with less. This principle applies to commodities as well as labor. A smart phone is a supercomputer, but it requires very little silicon and copper compared to the original generation. For example, the Cray-1 weighed over 5 tons and consumed 115kW. That’s over 30,000 times heavier than a Samsung Galaxy S9, and over 200,000 times as much power consumption. And for comparison, the S9 can perform over 4,500 times as many calculations per second.

Dairy production underwent a similar (if smaller) revolution. More cows could be supported on the same land, with more milk from each cow, and less labor per cow. This is all thanks to better breeding, computer tracking, customized individual feed control, and even automated rotating milk stations in the barn.

We have just described what computer software developers would call a race condition. Two processes—capital destruction and capital creation—are both running in the economy. The outcome of a race conditions will either be great, or terrible, depending on which process is faster. There is method to our madness, in formulating it this way. We will get to that below.

We want to first observe another problem with GDP. Who cares about the overall size of the economy? It’s not the gross size that matters to anyone. Of what benefit is it, to know that aggregate size is up 10%? What if population is up 11%? It could mean that each person is slightly worse off than before—but there are more people. And folks, it is by such low-resolution pictures that central planners attempt to perform their magic.

Once again, we see the breakdown of a macroeconomic statistic. It does not even tell us what it nominally (pun intended) promises. And it is useless as a planning tool anyways.

So how would one look at economic growth? And, to get back to our theme, how would one measure whether capital creation or capital destruction is winning?

The Problem with GDP

A naïve first attempt might be to divide GDP by population. “There, that addresses Keith’s complaint that population growth could mask a per-capita decline.” Maybe, but we cannot just assume a Quantity Theory of Economic Activity. Eating the seed corn does indeed add to GDP. Borrowing to consume, borrowing to finance ultimately unproductive assets adds to GDP. At least for a time.

We could also partially address the concern that GDP overstates consumption, by using a relatively new measure called Gross Output. Proposed by economist Mark Skousen, Gross Output is a broader measure that also includes sales of goods which are used as inputs by other industries. Here is a graph showing GDP and Gross Output. As Gross Output is considerably greater than GDP, we have scaled them to fill the vertical space in the graph.

It looks a lot like GDP, with more volatility (which Skousen acknowledges). Therefore, for our purposes—measuring true economic growth without distortion from malinvestment—it is not helpful. Perhaps someone would study the spread of Gross Output – GDP. A cursory look (below) shows it to be generally growing, except for a big dip around the global financial crisis, and a smaller dip around 2015. 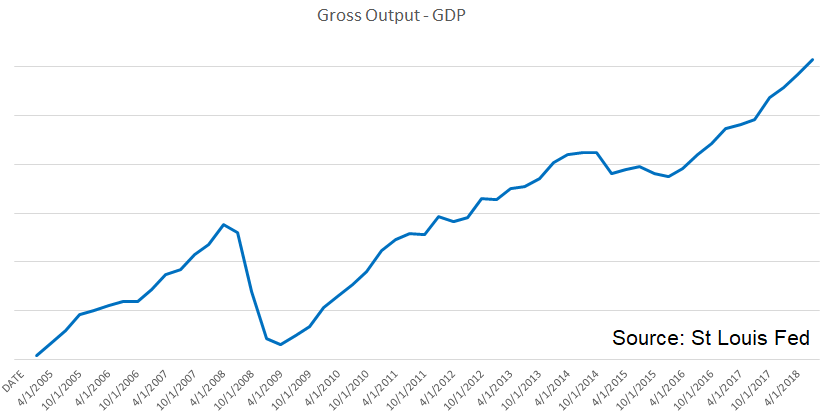 We have not given it a great deal of thought, but if we had to guess we would assume that this is showing another view of the long-term falling interest rate trend. That is, lower interest rates stimulate investment in higher-order goods, which are intermediate goods used to produce consumer goods. Or goods used to produce goods which are used to produce goods which produce consumer goods, etc. If a business does not want to borrow at 10%, it may be tempted by 9%, 8%, or 7%. And when it borrows, it buys the sorts of goods that are included in Gross Output but excluded from GDP.

Anyways, to look at true economic growth, stripped of the faux growth fueled by dirt cheap credit made dirtier-cheaper by ongoing central bank policy, we need another approach. This will help us answer the question of whether creation or destruction is winning. Carl Menger (the founder of the Austrian School) taught us to look for change at the margin.

Change in what, that is the key question. Keith has proposed Marginal Productivity of Debt. This does not look at gross economic activity. Nor does it divide it by population. Nor even debt. It looks at the marginal increase of GDP (we could use Gross Output, but GDP data is available for many more decades), compared to marginal increase in (total, not just government) debt.

How much additional economic activity does a newly borrowed dollar buy? Here is the graph.

What is this graph telling us? Yes, the slope is down and it is a very long-term trend. We mean our question in the context of economic growth, and the race between capital creation and capital destruction.

It is directly saying that we get less and less economic activity juice for every newly-borrowed dollar of debt squeeze. This is alarming, and we’ve written about it before. But today, we have another focus.

This grow shows the results of the race. Alas, capital creation is losing.

To understand why, we need to introduce a new concept. Which we will do next week.