A year ago, Republicans in control of Congress suspended the cap on federal borrowing. The limit was automatically re-imposed on March 1st. Politicians now have a few months to hammer out legislation to raise the cap as the Treasury employs “extraordinary measures” to fend off default.

The federal deficit is mushrooming once again. The 2017 tax cuts have taken a bite out of receipts at the IRS and economic growth has not met expectations.

This year’s borrowing to fill the gap between government tax revenue and expenditures may reach a trillion dollars for the first time since 2012.

If Washington politicians follow the usual script, we can expect Republicans to posture as fiscal conservatives and then relent either just before or just after a federal shutdown. 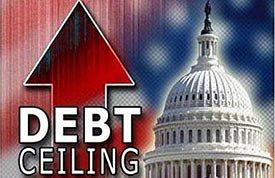 Democrats will chastise the GOP for playing politics with America’s sacred responsibility to pay its bills.

This drama has played out dozens of times over recent decades and is therefore likely to repeat once more this fall.

Perhaps it won’t, though. The Associated Press notes that there just aren’t many people in the Capitol who even pretend to care anymore when it comes to deficits.

Meanwhile, the socialist Left has touted so-called “Modern Monetary Theory” (MMT) as the mechanism to fund the economy-killing Green New Deal and any and all other government boondoggles. At its core, MMT advocates for perpetual money printing to fund government spending.

There has already been one government shutdown this year. Congress and the President may decide another one, for the sake of a bit of theater around the borrowing limit, is not a good idea.

Genuine conservatives in the Republican Senate are few and far between.

President Donald Trump released a portion of his proposed 2020 budget which calls for 5% cuts in non-defense domestic discretionary spending. He is requesting $8.6 billion in funding for a wall.

Needless to say, he will be vehemently opposed by House Democrats, and many expect Trump to compromise. In any event, should the President’s budget be enacted, officials estimate the budget might balance by 2034.

The borrowing cap is going to be raised as always. Even the will to pretend to fight against limits is fading. 2019 may be the year when the fiction of a federal borrowing limit is removed all together.

One thought on “Federal Borrowing Crosses The Rubicon”