Editor’s Note: A version of this post was published in November 2017 and was one of our more popular market updates and hence why we decided to update it today 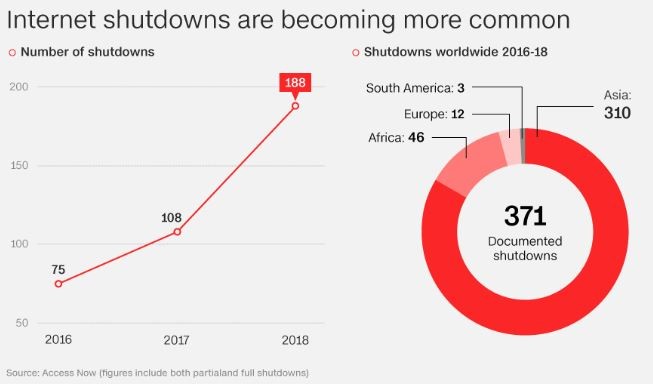 There was a sharp increase in internet shutdowns in 2018. And 2019 started in the same vein with increasing concerns that the tactic may become increasingly popular and used by embattled governments suppressing economic and political freedoms throughout the world.

During protests over the 2017 independence referendum in Catalonia, Spanish authorities reportedly throttled internet access and blocked websites. Russia is believed to have blocked the encrypted messaging app Telegram last year taking down the service that ended up negatively affecting dozens of other websites.

Overnight Facebook, WhatsApp and Instagram were down for a period of hours. Users across the world including the US, Japan, New Zealand and parts of Europe were affected by Thursday’s outage and faced difficulties accessing the social network giant Facebook and its apps Whatsapp and Instagram for several hours.

The very real risk is an increasingly global one, with multiple shutdowns also recorded in Europe, South America and Africa in the last three years.

UNESCO is warning that the number of internet shutdowns is increasing worldwide. According to Statista.com when reporting data provided by digital rights platform accessnow.org, “internet access has been curbed 116 times in 30 countries since January 2016.”

“Internet shutdown: An intentional disruption of Internet or electronic communications, rendering them inaccessible or effectively unusable, for a specific population or within a location, often to exert control over the flow of information.” – Access Now.

One question that so many ask when first hearing about bitcoin is ‘what if the internet stops working?’ Bitcoin and crypto proponents scoff and point out that there is no singular ‘off button’ i.e. it would be near impossible.

According to ‘father of the internet’ Tim Berners-Lee, this is true:

“The way the internet is designed is very much as a decentralised system. At the moment, because countries connect to each other in lots of different ways, there is no one off switch, there is no central place where you can turn it off.”

Try telling that to the one billion plus people in India who have experienced over 54 internet shutdowns in the last two years.

Or those in Egypt who on January 27th 2011 could no longer get online as the government shut down the internet in response to the pre-Arab Spring protests.

Even in the EU, ten years ago technologically advanced Estonia appears to have been a victim of Kremlin-sponsored cyber warfare, when Estonians found they could no longer access their bank accounts. Individuals and companies could not use their computers for the simple daily tasks that we take for granted today – such as email.

The above three examples are not rare occurrences. In the last two years alone there have been 116 situations where governments or state sponsored hackers seem to have found the ‘off button’ for the internet across 30 countries. That’s not counting all of the incidences when there have been other cyber attacks that have ‘merely’ affected vital internal systems and disrupted key infrastructure for large sections of society. 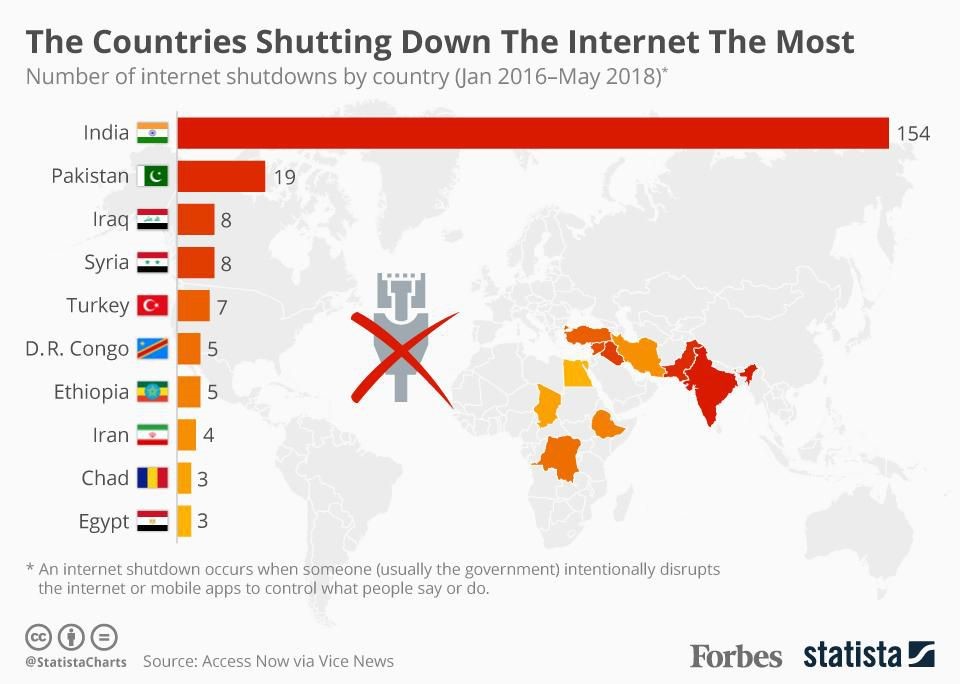 So whilst countries might be more connected than ever, that isn’t much help to the citizens who find themselves very much disconnected whether on a mass or individual scale. Internet shutdown is definitely possible and it is happening:

“There are several ways to shut down the Internet. One way is to make sure that when you type in a web address, such as dw.com/mediadev, your Internet service provider doesn’t allow you to find the underlying IP address. Another way is when an Internet service provider messes with the routing tables and removes key details so that packets of information traveling on the web aren’t allowed to travel to their final destination. Governments are using increasingly sophisticated methods to disrupt communications”

This isn’t just a disaster for those using bitcoin, this is a disaster for anyone who relies on an internet connection be it for communication or accessing their finances. Many in the West look at internet controls as something that is exclusive to developing nations or those more on the totalitarian-regime end of the political spectrum.

Sadly this is not the case. As you will see government-sanctioned internet shutdown and cyberterrorism are ever-present across many nations. The result? Individuals must protect their own freedom and safety of their assets as the authorities may have other priorities.

As the examples of India, Estonia and Egypt show internet shutdown is very much possible. It was the Egyptian shutdown of 2011 that prompted many other governments to realise the powers they could attain:

Until then, many governments had assumed it was not possible to turn off internet access to their entire nation, due to the decentralized nature of the network. But soon after, governments across the globe educated themselves about AS numbers and internet routing, and started using their power to set up systems that would allow them to order network shutdowns.

What was originally only intended to be used in more extreme circumstances has quickly devolved into officials using their powers for all sorts of questionable – and often political – reasons.

Internet shutdowns can be either at the will of the domestic government or a form of financial or military warfare from an outside authority or organisation.

India is where we see the highest number of authorised internet blackouts. Here government policy states that whilst such action requires the highest-level official in charge of domestic security – the Ministry of Home Affairs for the whole country or a state’s Home Department official – to sign off on any shutdown a junior member can shutdown the internet for a full 24-hours should gaining permission be unfeasible.

Many in Western countries might dismiss such government behaviour as perhaps a feature of developing nations or despot-led countries. Not so. In the UK  the Communications Act 2003 and the Civil Contingencies Act 2004 gives internet suspension powers to the Secretary of State for Culture, Media and Sport. This can be done either by ordering the shutdown of operations by internet service providers or by closing exchange points.

One person’s exceptional circumstances differ to another’s. For example, it’s interesting that in India the majority of shutdowns happen in Kashmir, the region which is heavily involved in a  political border dispute. The same goes for Turkey which since 2016 has allowed authorities to implement an internet ‘kill switch’ to “partially or entirely” suspend internet access when deemed necessary.

In most countries government-sanctioned internet shutdown is now part and parcel of policy. More often than not they are justified by their use in protecting citizens. However, as Deji Bryce Olukotun, Senior Global Advocacy Manager at Access Now explains:

There is no evidence that shutting down the Internet helps prevent terrorist attacks or stops them while they’re occurring.

There are 3.5 billion internet users around the world, approximately 50% of the global population. It is therefore unsurprising that internet use is increasingly considered to be a human right by many.

“As the Internet is a key enabler of many fundamental rights, including freedom of speech and expression, such frequent disruptions have been a cause for concern,” states InternetShutdowns.in.

“They threaten the democratic working of nations, and also point to the gradual normalization of the mindset that permits such blanket restriction on Internet access.”

Where there is internet access managing your day and business online is just an accepted fact of life, particularly in developed countries. When indicators such as the political, economic and social impact of the web, connectivity and use are considered the UK and US are ranked in the top three for web use by citizens.

The Internet helps us realize our human rights, including freedom of expression and privacy. When governments shut off the Internet, people can’t communicate with loved ones, run their businesses or even visit their doctors during an emergency. – Deji Bryce Olukotun

One would also assume therefore that our governments understand the importance of internet security and have several measures in place to prevent the likes of military-level cyber attacks or DDOS attacks from terrorist organisations.

Not so, the most progress that has been made by Western governments in recent years has been in regard to how much control they have over the internet as shown by the aforementioned policies.