Gold Is Often Criticized By Wall Street As Being Kind Of A Useless Investment.

But gold performs two jobs that fiat currencies, or any other financial innovation, cannot do; gold acts as a safe haven in times of turmoil. Indeed, gold’s status as store of value, as money, the only currency available when yours is worthless, has come into play with respect to the drama that has been unfolding in Venezuela over the last couple of years. Hyperinflation and shortages of basic foods and medicine have led to a political crisis.

What do you do when your country is falling apart? Well, if you’re Venezuelan President Maduro, you find bullion to sell, or use as a bargaining chip. This is a sad state of affairs especially for the people who must be enduring a monetary hardship the equal of Weimar Germany. But on the other hand, it’s a solid vindication of gold. You don’t see Maduro trying to sell bitcoin to pay the bills.

Gold, for the last couple of thousand years has acted to preserve your purchasing power. In 1913 (the year the US Federal Reserve was born) when the US dollar was a dollar, gold was US$20 an ounce. Today, 116 years later, the dollar has lost 95 percent of its purchasing power and gold is bouncing around $1,300 an ounce.

Gold gives all of us something that fiat (paper money), or any other financial innovation, cannot deliver.

Gold is insurance. That’s what gold is, it’s insurance, sprout-less yes, but irreplaceable in its functions.

Basel I, II and III are a response to the 2008 financial crisis. The regulations require banks to maintain proper leverage ratios and to meet certain minimal capital requirements.

Under the old Basel I and II rules, gold was rated a Tier 3 asset. Under Basel III Tier 3 has been abolished. As of March 29th 2019, gold bullion is a Tier 1 asset. Also, and this is important, under Basel III a bank’s Tier 1 assets have to rise from the current 4% of total assets to 6%.

“Tier 1 capital is the core measure of a bank’s financial strength from a regulator’s point of view. It is composed of core capital which consists primarily of common stock and disclosed reserves (or retained earnings) but may also include non-redeemable non-cumulative preferred stock. Banks have also used innovative instruments over the years to generate Tier 1 capital; these are subject to stringent conditions and are limited to a maximum of 15% of total Tier 1 capital.” Wikipedia

The Basel Committee for Bank Supervision (BCBS), the maker of global capital requirements and whose Basel III rules form the basis for global bank regulation, just made gold a bank capital Tier 1 asset.

“Gold has historically been classified as a Tier 3 asset. When determining how much money a bank can loan, the bank’s gold holdings have traditionally been discounted 50 percent of the current market value. With value cut in half, banks have little incentive to hold gold as an asset.” Frank Holmes, usfunds.com

Because gold is a Tier 1 Capital asset banks can operate with far less equity capital than is normally required. Gold is the new backstop for debt, currencies and bank equity capital.

“Anyone who understands gold’s historic role will grasp the importance of the argument behind extra bank leverage. Direct ownership of bullion by a bank is superior to holding the fiat money issued by a central bank. It should increase confidence in any bank and the system as a whole. Given relative values, bank purchases of bullion will drive the value of gold as Tier 1 capital up relative to other qualifying assets, increasing its desirability for regulatory purposes further without a gold-owning bank doing anything.” Alasdair Macleod, resourceinvestor.com

Because of the upcoming massive debt rollover, and a collapse of faith in traditional collateral values, gold just become a core banking asset.

Lenders loan money based on the criteria of:

The borrower’s ability to service the debt – cash flow

A combination of both cash flow and collateral

Debt has a maturity, and when maturity is reached borrowers look to roll it over. Unfortunately for borrowers the value, and high levels of esteem, of what has traditionally been thought of as good collateral (sovereign obligations – currencies) has collapsed.

“Given the regulatory pressure to collateralize exposures, regardless of transaction type, there is a greater need for collateral. But going forward, there may be a risk of a shortage of good-quality collateral.” Olivier de Schaetzen, director, Euroclear

The latest debt figures come from a report by the Institute of International Finance (IIF). In September 2019 worldwide debt – all government, household and nonfinancial business borrowing – totaled a whopping US$244 trillion, or almost a record 318 percent of world gross domestic product (GDP).

Rollover risk is high, according IIF data emerging-market borrowers face US$2 trillion of debt maturing in 2019.

“The great corollary of over indebtedness is the relative scarcity of good collateral to support the debt load outstanding. This imbalance of debt to collateral is impacting the ability of banks to make loans to their customers, for central banks to make loans to commercial banks, and for shadow banks to be funded by the overnight Repo market. Hence the growth of gold as a collateral asset to debt heavy markets is inevitably in the cards and is de facto occurring. Gold is stepping up to the plate as “good” collateral in a world of bad collateral.” Professor Lew Spellman, former economist at the Federal Reserve and former assistant to the chairman of the President’s Council of Advisors

John Exter is known for creating Exter’s Pyramid – useful for visualizing the organization of asset classes in terms of risk and size. 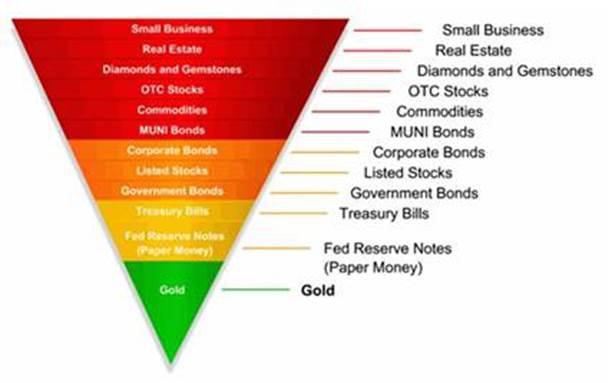 After the 2008 financial crisis government bonds – Greece and Italy come to mind – lost nearly all their value. Mortgage backed securities, innovative instruments, are near worthless.

A quick scan of recent news reveals bonds are tiring, stocks are struggling, real estate is collapsing and small business is still being decimated by online sales. As already discussed the US$ – paper money, the world’s reserve currency – has lost 95% of its value.

Among the top gold buyers was Russia, which all but liquidated its US Treasury holdings, to try and diversify away from the US dollar. (more on that below)

Bloomberg reports that within a decade, the Russian central bank has quadrupled its bullion reserves, an effort that continues. In February the Central Bank of Russia added a million ounces, the most since November 2018.

Central banks clearly see the value in increasing their gold reserves. After the massive value destruction suffered holding paper assets (After 2008 MBS lost most of their value and many sovereign securities are today, also near worthless), perhaps almost a doubling of gold bullion purchases in 2018 over 2017 totals is indicative they believe gold is a better Tier I asset then government debt and mortgage backed securities? There is also that 2% increase in total assets to 6% that now needs to be filled, likely by gold.

For me, and you, gold is insurance. For the banks who hold the world’s debt, gold is the new backstop. It will be an interesting exercise to watch future Central Bank gold bullion purchases.