Compound interest is the best known example, but the same principle of compounding cash flows is also the most powerful and stable source of wealth with the stocks and real estate over the long term as well.

However, what was taken for granted for many decades – is no longer available. As a result of Federal Reserve policies, only a small fraction of the historically average power of this wealth building engine still remains. In this analysis we will examine the mathematical implications of publicly stated Fed intentions if there is another recession, and look at the extraordinary implications for investors.

This analysis is part of a series of related analyses, an overview of the rest of the series is linked here.

Building Wealth With The Reinvestment Of Cash Flows

A simple example of this powerful wealth creation machine can be seen in the graph below. 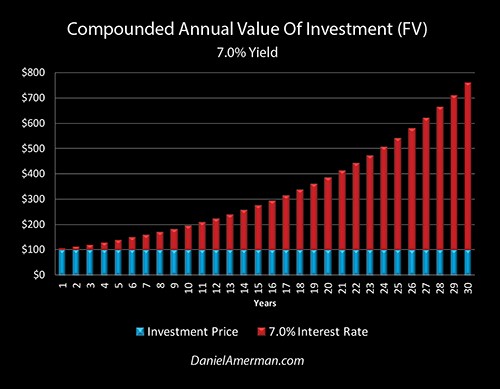 The blue bar is our starting investment of 100 dollars. The red bar is cumulative interest income, with reinvestment (i.e. compounding) at a seven percent rate of return. The 7.0% interest rate is not random, but is instead what could be called historically normal – before the financial crisis of 2008.

During the 36 years (inclusive) from 1962 to 2007, the average interest rate on a 10 year U.S. Treasury bond was a little over seven percent. For most of the lifetimes of most the people reading this – it is was completely normal to be able to earn a 7% or greater return without even needing to take any credit risk.

If we go out 30 years  – for say, a 50 year old investing for retirement expenses at age 80 – then simple normality with a very high quality investment used to be $100 becoming $761. That $661 in earnings and earnings on earnings is not only much larger than the initial $100 investment, but its creation was relatively stable. Investments where returns are based solely on price movements are inherently unstable, while investments where reinvested cash flows are the primary driver of wealth creation, smooth out the price risks over time and are inherently more stable.

That was the past, but the present is quite different – and this is a matter of Federal Reserve policy. The Fed slammed Fed Funds rates down to their lowest levels in 50 years in the attempt to contain the damage from the collapse of the tech stock bubble and the recession of 2001.

Facing the much worse situation of the financial crisis of 2008, the Federal Reserve took the unprecedented steps of zero percent interest rate policies and quantitative easing, i.e. creating trillions of dollars of new money out of the nothingness and using those dollars to manipulate interest rate levels. 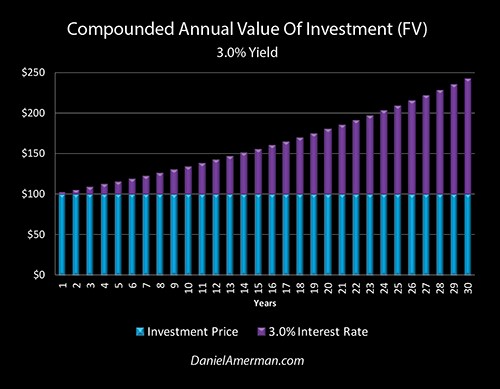 As is visually obvious the purple bars of compound interest income are far lower at our current interest rate levels, than is the historic average. In 10 years, $100 now becomes only $134. When we go out 20 years, our total investment is now worth $181, and if we go out 30 years, the total is now $243.

The Impact Of A Potential Recession

An issue is that there appears to be a pretty good chance that we could have a recession in the next year or two. As explored in earlier analyses in this series, we already know what the Federal Reserve intends to do in such a case.

The first step will be to – on a highly likely basis – move interest rates straight back down to (at least) zero percent (analysis link here). To the extent necessary, the Federal Reserve also intends to immediately create a new round of quantitative easing (analysis link here), stack the new QE on top of the old QE on the Federal Reserve balance sheet, use the newly created money to buy medium and long term U.S. Treasury obligations, and thereby bring down the yields faster and farther than the market by itself would do.

With those being the Fed’s intentions, for this illustration we will move the assumed yield down to 1.0%, in the event of another iteration of the business cycle, and another recession. 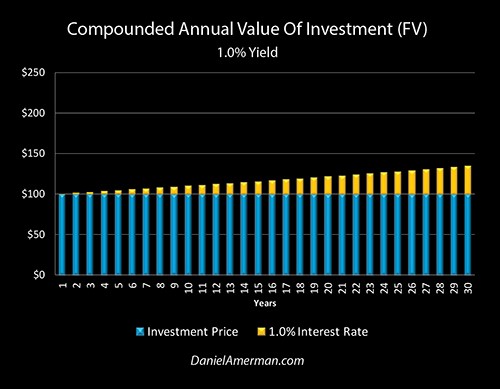 We now have the gold bars of cumulative and compound interest earnings at a one percent yield. If one scrolls back and forth between the red bars of what was historically normal for most of our lives – and the gold bars of what may be on the way with a 35th round of recession (since 1854, link here) – the difference is visually stunning.

The normality of the single most reliable method of building wealth over the long term has been eviscerated, there is almost nothing left. One hundred dollars becomes only $110 in ten years, $122 in 20 years, and a mere $135 in 30 years.

Using the reinvestment of cash flow earnings is the most powerful wealth creation engine in financial history – and this is true not only for bonds, but also for stocks and real estate (albeit with somewhat differing specifics).

What is illustrated above is the annihilation of this historical wealth creation engine for the investors of an entire nation (and much of the world) as a publicly stated matter of policy.

Now, it is of course true that the Federal Reserve is not coming out and saying that their intention is to destroy the engine of wealth creation for the nation for years and potentially decades to come. They aren’t putting out the press releases about how every retiree and retirement investor in nation is likely to see stunning declines in wealth creation and financial security as the result of their policy choices.

But nonetheless, the one is the mathematically necessary result of the other. To see just how simple – and how necessary – this relationship is, I’m going to have to ask the reader to join me in a brief foray back into the basics of mathematics.

One of the fundamental building blocks of mathematics is functions, and the general form of the function that determines how Fed policies transform wealth creation is shown in the equation below.

This can also be expressed as y = f(x), where f(x) = (1 + x)^n and it is a very simple function, albeit a nonlinear function. The input or independent variable is X. Whenever the value of X is changed, then we also get a direct change in the value of the output, also known as the dependent variable of Y. Because this is an exponential function, relatively small changes in X can produce radical changes in Y, and this is particularly true at higher values of N.

Now let’s go from the basics of mathematics to the foundation principles of financial mathematics, and see why some of the biggest changes in our lifetime have already occurred – as well as why we may be just getting started.

For finance, this becomes the compound interest function, and the independent variable of X is now replaced with the  specific term of “i”, the effective risk free rate of return. If one wants to get technical, “i” is generally considered to be overnight Treasury yields, however, given the extremely close relationship between overnight Treasury yields and overnight Fed Funds rates, it is fair to say that when the Fed changes Fed Funds rates it is effectively quite directly changing “i” as well.

For many investments, the risk-free rate is the starting point, and premiums are added on top of that. It can be a term premium (tp), such as adding 1% for a longer term bond if the Fed forces zero percent short term interest rates (y = [1 + i + tp]^n).

Keep in mind that the whole purpose of long-term investing is to reach the place where our money is working for us – rather than our working for our money. 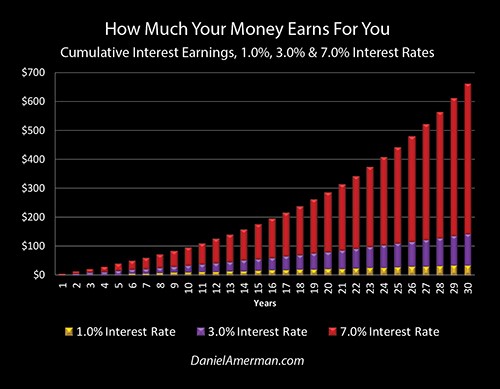 The Federal Reserve has gone down the path of trying to contain crisis and stimulate growth by manipulating the independent variable “i” in our compound interest function, and forcing the input down from seven percent to three percent.

Because this occurs at the level of the very foundation that underlies all of finance and investing, the ramifications of this change spread out (in filtered form) into wealth creation for all investors, in all investment categories, over the long term.

It also need to be noted this 3% level could be the peak in the current Fed cycle of increasing rates. The Fed intends to respond to future recessions by slamming short term rates right back down to (at least) zero percent, and to use quantitative easing and trillions in new money to reduce term premiums, and directly force medium and long term bond yields down as well.

In the event of future recessions, the Federal Reserve intends to go down a path of trying to contain crisis and stimulate growth by manipulating the independent variable in our compound interest function of “i”, forcing the input down from the historical seven percent average to a mere one percent (in round number terms, with the assumptions in this illustration).

Because this change in the dependent variable exists at the very foundation that underlies all investing, the ramifications would spread out (in filtered form) to wealth creation for all investors, in all investment categories – including stocks and real estate – over the long-term.

The Federal Reserve fully intends – if needed – to contain crisis by using a policy of forcing the independent variable of the risk-free rate into what had been an unprecedented range for what could be many years or the better part of decades to come. If this happens, it will in fact quite directly force the exponential reduction of the dependent variable of the creation of wealth from cash flows over time, with wealth creation falling to only five percent or less of historic norms at sufficiently high values of N.