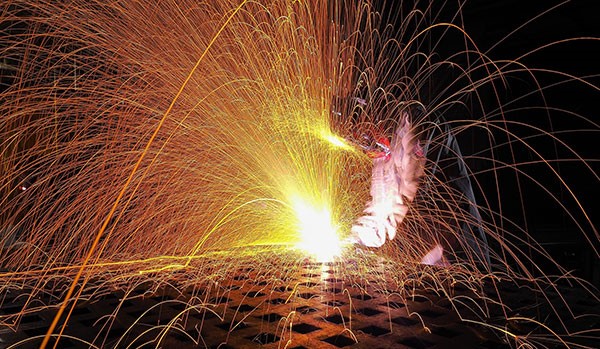 Perhaps surprising no one, global manufacturers are now in contraction mode for the first time since 2012. That’s according to the most recent reading of the sector’s health, the purchasing manager’s index (PMI), which headed lower for a record 13th straight month in May. The PMI posted 49.8, down from 50.4 a month earlier. As a reminder, anything above 50.0 indicates expansion; anything below, contraction. 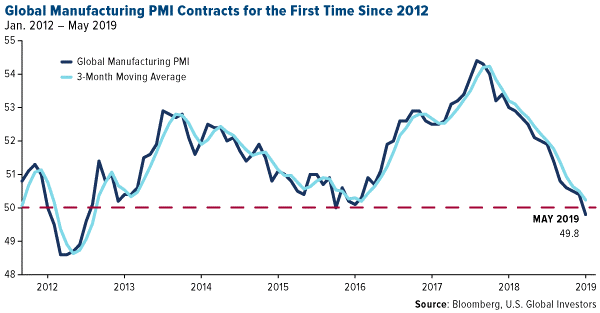 Less than half of world economies’ manufacturing sectors are expanding right now, “the worst showing since the throes of the euro area sovereign debt crisis in 2012,” according to analysis by Neil Dutta, head of economics at Renaissance Macro Research (RenMac).

Dutta adds that one of the few bright spots is India, whose own PMI climbed to a three-month high in May. However, “the improvement might be fleeting as the U.S. recently announced that it would strip India of a special trade status.”

This Wednesday, June 5, the U.S. will remove New Delhi from its privileged trading program called the Generalized System of Preferences, which for decades has allowed some developing countries such as India to avoid tariffs on certain exports to the U.S. By ending India’s exemption status, worth tens of billions of dollars, President Donald Trump hopes to pressure Prime Minister Narendra Modi into giving the U.S. greater access to his country’s market.

Indeed, tensions surrounding international trade, particularly between the U.S. and China, have been taking a large toll on manufacturers. The two superpowers represent around 34 percent of the global PMI weighting, so any weakness in either country will disproportionately affect overall manufacturing strength.

The U.S. PMI fell to 50.5 in May, its lowest print since September 2009, while new orders “are falling at a rate not seen since 2009, causing increasing numbers of firms to cut production and employment,” commented Chris Williamson, chief business economist at IHS Markit, which produces the report. I shared with you last month that the “flash” PMI showed new orders in the U.S. falling for the first time since August 2009, and it turns out that this preliminary reading was accurate. 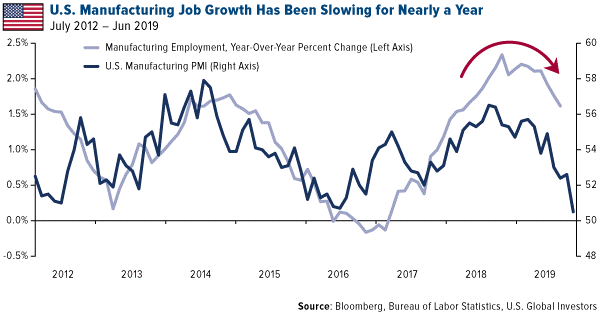 President Trump’s plan to impose a 5 percent tariff on all goods imported from Mexico was announced too late in the month to have an impact on the May PMI reading. Yesterday Trump said that it’s “likely” the tariff will go into effect next Monday as planned—in response to Mexico’s perceived unwillingness to do more to stop illegal immigrants from entering the U.S.—so it’s probably safe to anticipate further manufacturing weakness before conditions start to improve.

What Does This Mean for Stocks?

The reason why the slowdown should be a concern for investors is because of the manufacturing sector’s outsized role in the broader U.S. economy. In the fourth quarter, manufacturers contributed some $2.38 trillion to the U.S. economy, accounting for nearly 12 percent of gross domestic product (GDP). The sector also has a huge multiplier effect. For every $1 that’s spent in manufacturing, another $1.82 is created, according to the National Association of Manufacturers (NAM).

Higher consumer demand for goods and services means manufacturers require greater amounts of raw materials and natural resources. This benefits the metals and mining sector, not to mention energy, transportation and more.

As you can see below, the S&P 500 Index has closely tracked the global manufacturing PMI. When manufacturers expanded at a faster rate, stocks jumped higher year-over-year. And when they slowed or even shrank, stocks sold off. 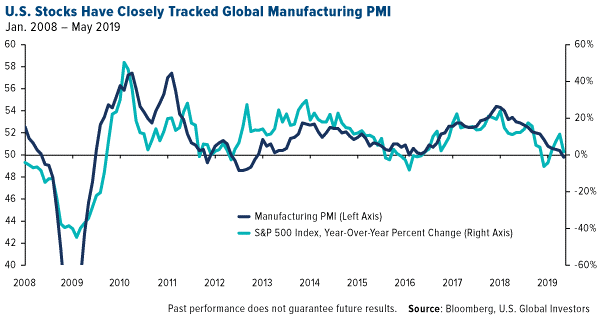 It’s for this reason that I believe investors should remain cautious going forward. Let’s see how negotiations between the U.S. and China, and the U.S. and Mexico, proceed.

Stocks traded up sharply yesterday following Federal Reserve Chair Jerome Powell’s suggestion that he’s open to rate cuts if economic conditions worsen. But it can’t be all about the Fed.

As always, I recommend investors ensure they have around a 10 percent weighting in gold bullion and gold mining stocks, which have performed well in times of economic uncertainty. Today the yellow metal broke above $1,330 an ounce for the first time since March, and there could be additional upside potential the longer trade fears persist.