Skip to content
HomeThe Golden ‘Moment Of Truth’ Is Upon Us: $1,400-Plus Or Not?
By Michael Ballanger – Re-Blogged From Gold Eagle

With gold enjoying its best week of the year, with the Daily Sentiment Index charging northward, with the Relative Strength Index (RSI) pressing 72 for the GLD, with the RSI for GDX pushing 75, and finally, with the newsletter community all falling on top of themselves with self-laudatory backslaps, I think it is time to adopt the contrarian view and step back.

The point is that while I would love for gold to break out of this bullion bank headlock at the $1,350–$1,375 band of resistance, history has proven it to be a formidable obstacle and one that you absolutely must face.

Here are a few charts illustrating my point:

First, the GLD, hated by many, traded by most, and an excellent proxy for the “paper gold” market, the second-most corrupt market in the world and runner-up to the most corrupt market in the world, the Comex (“Crimex”) futures market in Chicago. Right up there beside it is the HUI, the unhedged gold miners index that represents the vast universe of gold mining entities around the world, and another great proxy for a vastly hated group of companies whose collective market cap losses in the past eight years has been colossal.

Many, many new millionaire investors have sprung up from owning these lifestyle-preserving dinosaurs, having been formerly billionaire investors prior to taking the gold miner plunge. The HUI has had no fewer than six rallies since the top in August 2016, but each rally was followed by new lows, with the most recent low coming last September. The RSI and moving average convergence-divergence (MACD)/histogram combo currently reside in “overbought” territory, and if history proves as reliable today as it was at every other visit to the $1,350–$1,375 resistance zone, we should don the personalities of the hideous bullion bank traders and sell that which we own in the paper markets to adopt their illicit yet enormously profitable tactics and executions. 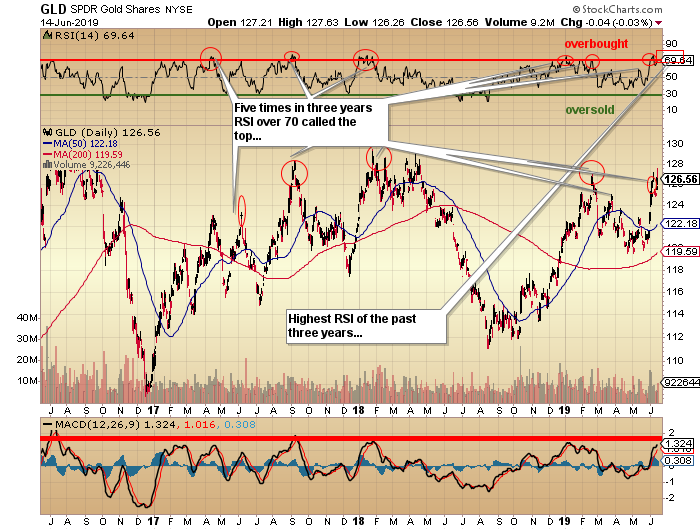 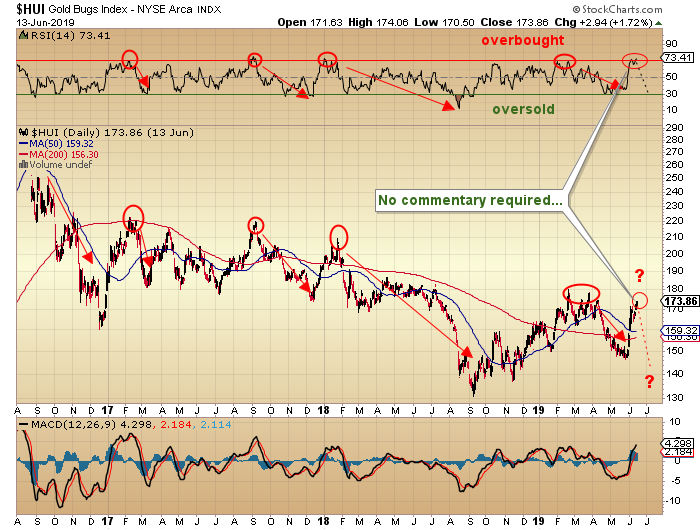 The next two charts are my favorite vehicles for dice-rolling. . .er. . .speculation in the miners because they are extremely liquid and they report to oversold and overbought conditions appropriately to the extent that you can buy 100,000 shares with an RSI around 30, as I did in May with JNUG and NUGT, and then let it fly when the RSI exceeds 70, as I did last week. Because I subscribe to the view that most successful traders earn their stripes by always selling too soon, I was a week early in pulling the JNUG and NUGT triggers, but as I never buy 100% positions in one fell swoop, I also never sell 100% positions in the same manner. I scale in and I scale out because no one indicator is infallible. All data is freely available to literally everyone, but I have learned over the many years of trading (and losing) that it is the interpretation of the indicator, as opposed to the level, that defines the trade’s set-up. Please allow me to elaborate. 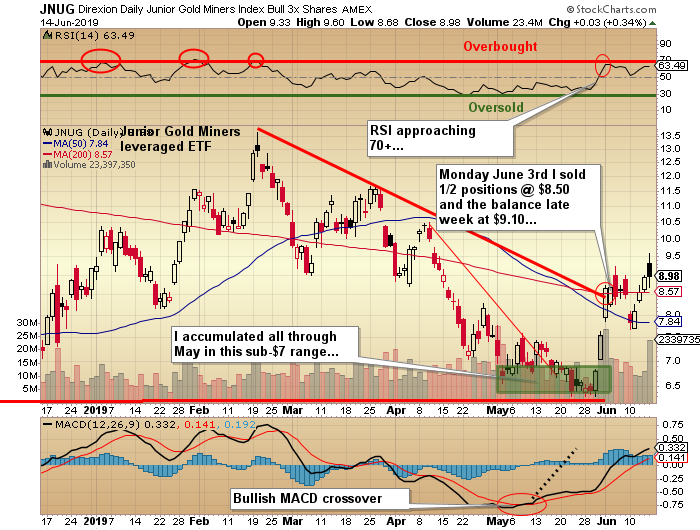 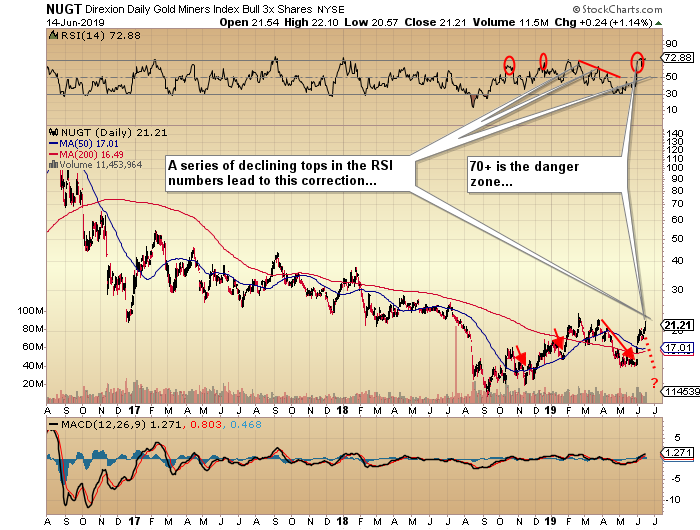 George Soros once wrote that he would experience back pain whenever he entered a trade that was suspect. Rather than rejecting it as a psychosomatic illusion, he learned to trust the back pain as a definable premonition of unfavorable outcome. It was his brain telling him to exit the trade by way of his body and despite the voodoo-ism in the explanation, I totally agree with him.

On Friday the 14th, I arose from slumber at roughly 5 a.m. and proceeded to check the markets while luxuriating in some lovely new 400-thread sheets recently introduced to me by my partner. As I had already started to exit my leveraged gold and gold miner positions, I was stricken with a sharp pain of panic as gold was trading in the $1,355–$1,360 range. Not only had I gone on record as a seller of the move to $1,350, I was tweeting out all week warning after warning in the $1,340–$1,350 range. So to say that the June 14 3:00 a.m. Globex print at $1,361.20 was problematic is an understatement.

If you had asked me in 2001 what I thought would drive gold to $5,000 per ounce, I would have responded with a list of economic, financial and geopolitical events such as terrorist attacks, war, debt defaults, stock market volatility, currency crises, accelerating inflation rates and fraud, all driving investors to the time-tested safe havens of precious metals. It all started with the 9/11 Twin Towers attack in NYC, and then escalated from there, taking us through nearly two decades of turmoil in all of the aforementioned areas.

Well, ladies and gentlemen, we have had multiple historical price drivers for precious metals during that period but what we have also seen is a massive, coordinated and fraudulent campaign to control investor appetites across a wide spectrum of asset classes, demographics and borders. The new rock stars of the 2000s are now central bankers, whose mega-maniacal actions move markets and create or destroy trillions of dollars of citizenry wealth with their utterances, written words and, more recently, social media “bulletins.” It is as if central bankers from all Western nations met in Basel in 2001 and decided where they had the greatest collateral exposure (think real estate and bonds), then proceeded to map out a plan designed to foster confidence in stocks, bonds, U.S. dollars and real estate while crushing investor demand for hard assets like silver and gold and finally cryptocurrencies, whose fate was sealed in late 2018 with its listing on the “Crimex,” fully endorsed by the Commodity Futures Trading Commission (CFTC).

I fully expected this turmoil back in 2001, after the dot.com bubble popped, sending an entire tech-loving generation to the poorhouse. But the problem was that the playbook, which had included fifty years of knowledge, omitted the new rules concerning cause and effect. By example, if you think it is going to rain, you take steps to stay dry by way of rain gear and umbrella; if you think that the U.S. banking system is going to be vaporized through greed and malfeasance, you load up on gold.

However, if it starts to rain and an invisible hand removes your rain gear and destroys the umbrella, you are suddenly drenched. You correctly predicted and prepared for the event (rain), thus identifying the cause, but despite such preparations protecting you for the past fifty years every time it rained, you got wet. The effect was distorted by forces over which you had no control. Similarly, despite correctly identifying multiple causes that should have driven gold to $5,000/ounce, forces over which I had no control conspired to distort investor demand, and instead of stocks crashing and precious metals soaring, the exact reverse occurred, beginning in 2011 and continuing to this very day.

So when I use the term “reluctant hero,” it is because I have trained myself to think and act like a bullion bank trader, complete with unregulated license and unrelenting bravado. Aligning one’s trade setups to coincide with the Commercials is by no means a guarantee of profit, but refusing to take the other side of a bullion bank trade setup does, at the very least, dramatically improve one’s probability of success.

The downside is that acting and behaving like a bullion bank thief is an unhealthy and unrewarding exercise. You run the risk of assuming that 5,000 years of history confirming the wondrous utility of gold ownership will never return, and that the only history that matters is that which began on December 23, 1913, on Jekyll Island. The financial risk is borne out the moment you wake up and gold is at $1,450, and there are no offers and your trade alignment with the bullion banks have suddenly and viciously bankrupted you. And with what is happening today around the world, it is a serious risk.

This chart is an illustration of the massive response by gold to the subprime bailout in 2009, and the subsequent smothering of any type of response whatsoever from 2011 until today. As of the close of business on Friday, June 14, gold went out just below that formidable band of resistance at $1,350–$1,375, and I expect it will be a battle for the ages as pro-gold forces wage war with the bullion bank behemoths. Judging from the open interest surge late last week, it appears as though it is more than likely a repeat of past interventions, with downside risk to $1,315–$1,320. However, gold is going higher over the longer term and that’s why I maintain positions in the portfolio shown below. 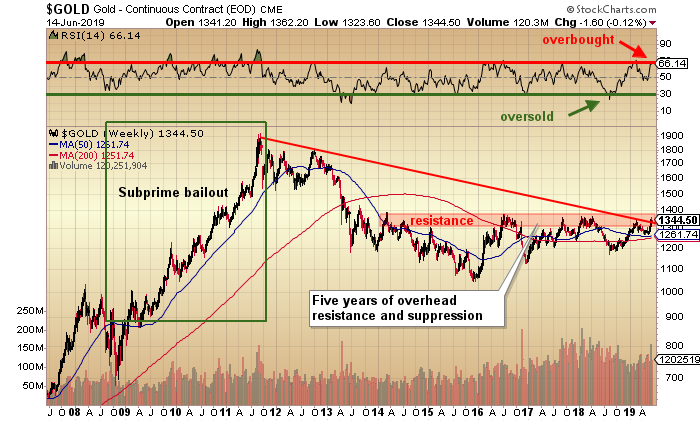 The cash position currently at around 27% is the total profits from trades made in 2019 less two hedges put on last week, the most impactive to date being the purchase of 100 Goldman Sachs July $180 puts in May for $2.20, and then sold in June at $6.60 for a 200% return or $44,000 (U.S.) in profits. You will note that I do not trade physical gold and silver, and I rarely trade the unleveraged ETFs (GDX and GDXJ), while using the leveraged ETFs (JNUG and NUGT) as trading vehicles and the DUST as a hedge. The remaining cash will be deployed on a correction in gold, which I expect next week, or in the event that the bullion banks get caught short and we scream through $1,375.

As can be seen from the GGMA portfolio, I stand to benefit far more on a gold breakout that lasts rather than from a corrective move favoring the bullion banks.

Damn the torpedoes and pass the tequila. Let’s see what this week brings.