U.S. natural gas prices have collapsed since the end of winter, even as inventory levels remain below average levels for this time of year.

Henry Hub prices spiked in the fourth quarter of 2018 due to record levels of demand, cold weather, and historically low inventories. But prices remained elevated, over $4/MMBtu, for only a brief period of time. Production continued to soar, so traders were not overly concerned about market tightness.

As peak winter demand season drew to a close in March, prices continued to ease, and prices have eroded steadily in the last few months. Prices dipped below $2.30/MMBtu recently, hovering in that range for the first time in roughly three years. As recently as December, prices were twice as high as they are now. 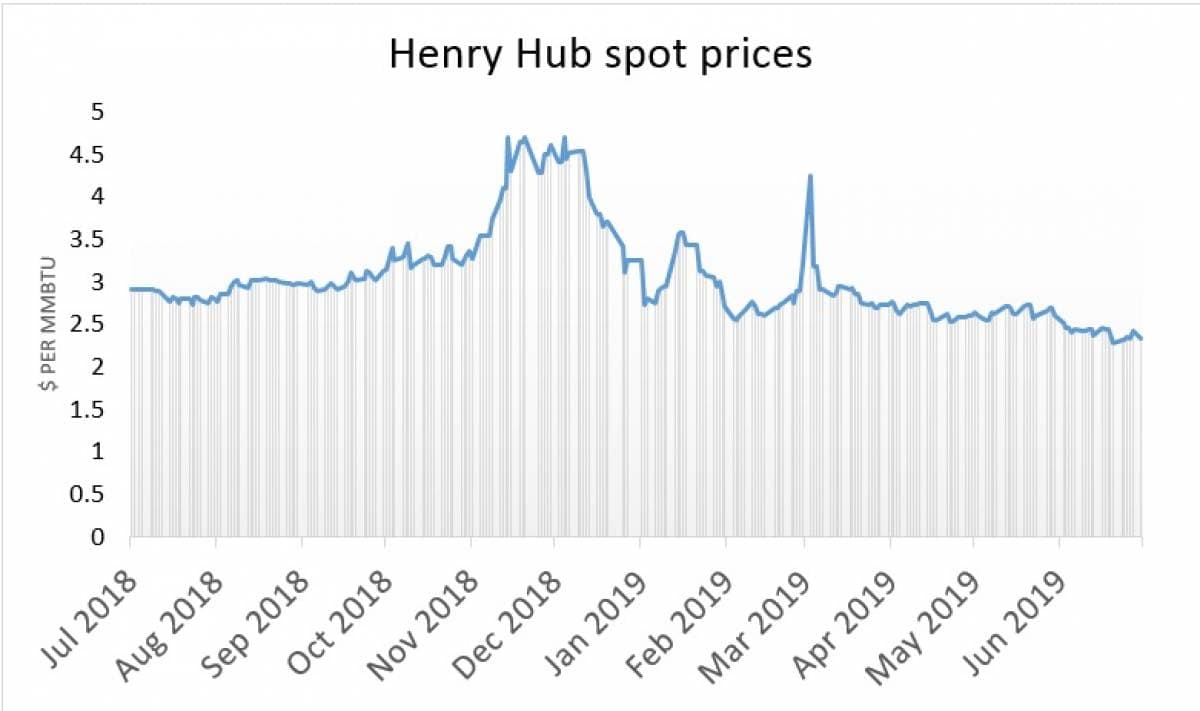 What’s going on? The main driver of the bearish market is production, which continues to ratchet higher, even as shale gas drillers are suffering from financial strain. Production from the Marcellus shale alone was up about 15 percent in May from the same period a year earlier.

Gas markets also go through seasonal swings, seeing a peak in demand in winter and to a lesser degree in summer, while consumption falls sharply in spring and fall. But swings in temperatures from year to year can lead to significant disruption. A cool start to the summer this year led to lower demand than otherwise would be the case, allowing inventories to build back up.

In the last week in June, U.S. natural gas storage levels stood at 2,390 billion cubic feet (Bcf), up 89 Bcf from a week earlier. Storage was still 152 Bcf below the five-year average but 249 Bcf higher than last year, which helps explain why prices recently fell off a cliff. Stocks have replenished, at least relative to last year.

The multi-year low for natural gas prices are likely to deal a further blow to the coal industry, already caught in a death spiral. At least three coal companies have filed for bankruptcy since May, potentially putting 2,000 mining jobs at risk. Coal has a hard time competing with natural gas prices this low. Related: The Real Reason Why ExxonMobil Won’t Go Ahead With $53 Billion Iraqi Megaproject

But low gas prices is also bad news for the gas industry itself. Recently, a former executive at EQT, one of the country’s largest shale gas producers, said that fracking has been an “unmitigated disaster” for the industry, depressing prices and leading to consistent losses. “And at $2 even the mighty Marcellus does not make economic sense,” Steve Schlotterbeck, the former EQT executive said at an industry conference last month. “There will be a reckoning and the only questions is whether it happens in a controlled manner or whether it comes as an unexpected shock to the system.”

The gas rig count continues to decline, recently falling to 173 in the last week of June, down from over 200 at the start of the year.

Meanwhile, overseas gas markets are also suffering from oversupply and low prices. A wave of new LNG export terminals are coming online in 2019, and LNG prices have tumbled. In the all-important market in East Asia collapsed this year, with JKM prices falling below $5/MMBtu, the lowest level in years. Traders clearly do not see things improving much going forward. While front-month JKM prices are trading at $4.58/MMBtu right now, contracts for August 2023 are only trading at $5.93/MMBtu. Oversupply could stick around for years, if this outlook bears out.

In Europe, too, gas markets are oversupplied. Higher volumes of LNG are arriving on European shores at a time when Russia is hoping to defend market share. “As two of the world’s largest gas producers, Russia and the US are natural competitors in what seems to be a race to the bottom, not only in the lucrative Asian market but now also in Europe. Both countries have sent increasing amounts of gas to Europe despite the low price environment,” Carlos Torres-Diaz, head of gas markets research at Rystad Energy, said in a statement.

“Some US exporters are not covering their operational costs. Nevertheless, US exports to Europe during the first five months of 2019 increased by 6.9 Bcm versus the same period last year,” Torres-Diaz said.