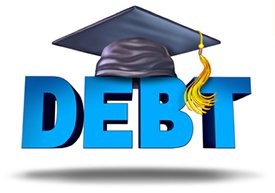 Student loans now rank as the second largest category of American consumer debt – bigger than credit cards, bigger than auto loans, and behind only mortgages.

Generation Z (composed of those now in their college years) faces the bleak prospect of crushing student loan debt combined with the crushing burden of more than $100 trillion in unfunded liabilities they will inherit from Uncle Sam.

No generation before has ever entered their prime working years with such enormous financial burdens. To make matters worse, they will enter their investing years with the stock market in extremely overvalued territory.

As the Baby Boomers head into retirement and begin steadily drawing wealth out of their IRA and 401(k) accounts, debt-saddled younger generations will likely lack the buying power to keep markets propped up.

Perhaps the Federal Reserve will step in as a “buyer of last resort” to keep debt and equity market bubbles from bursting. But it will take an unprecedent amount of buying (i.e., currency printing) to prevent another 2008-style (or worse) meltdown.

In the 2000s, the federal government, through the Community Reinvestment Act, started aggressively pushing banks to extend financing to “underserved communities.”

In practice, that meant lowering standards and pushing people better suited to renting into becoming holders of mortgages on overpriced properties.

The U.S. government assumed near total control of the student loan market in 2010. It has issued $1 trillion of student loans since – many to people who have pursued economically worthless degrees in dubious subjects taught by leftist professors who care more about pushing their ideology than providing value to students.

As a consequence, more than 5 million “higher educated” Americans are now in default on their student loans. Millions more are foregoing things like home ownership and family formation because their bloated student loan payments are financially equivalent to having a mortgage.

A study by the Economic Policy Institute found that 54% of recent college graduates were either unemployed or employed in a job that doesn’t require a college degree.

Why College May No Longer Be a Good Investment

The biggest growth in university hiring has been not for professors but for administrators who sit in offices and push paper or push social agendas.

Defenders of the traditional four-year college insist that it’s still a good investment. They argue that college graduates go on to earn several hundred thousand dollars more than non-grads over the course of their lifetimes – more than enough to justify the escalating costs of college.

But as any mere undergrad should know, correlation does not imply causation. Students who enter elite universities tend to have relatively high IQs to begin with.

They will tend to find their way to career success with or without college.

IQ has been shown to be a better predictor of job performance than number of years in school. And IQ tends to be a relatively stable trait after age 18 – meaning college won’t turn an average 100-IQ individual into a 150-IQ genius.

And a true genius may find college to be a waste of time (some of the greatest modern innovators in business, arts, and technology either never attended college, dropped out, or pursued their passion independently of their college work).

Standardized tests such as the SAT are strongly indicative of IQ. But social engineers are now pushing for the SAT to include an “adversity score” which would give bonus points on the basis of adverse life circumstances such as poverty and single mother households.

Some people face more adversity in life than others. Overcoming it is an achievement that should be celebrated. But the education establishment now celebrates adversity and perceived victimhood itself – encouraging students to wallow in their “marginalized” intersectional status and become dependent on authorities who pose as their saviors.

Despite all the political corruption and unnecessary cost inflation of higher education, college may still be the only viable path to certain types of careers. Some majors (such as engineering) are economically more valuable than others (such as gender studies).

Sending a kid off to college with no particular plan other than to acquire a well-rounded education doesn’t work anymore. It’s no longer even possible to obtain a classical education at most universities. They instead feature (and often mandate) courses aimed at deconstructing the foundations of Western civilization.

The Gold Standard vs. the Ph.D Standard

According to data from Open Syllabus Project, Karl Marx’s Communist Manifesto is the most frequently assigned book on economics.

Even if most economic professors aren’t outright Marxists, they still won’t teach students the most strident critiques of Marxism. Most economics majors will be taught from a Keynesian, mixed-economy interventionist perspective.

They won’t even be exposed to alternative schools of thought such as Austrian economics.

Students might read Milton Friedman, but they will have to seek out on their own books by more radical free-market thinkers such as Ludwig von Mises, Murray Rothbard, and Hans Herman Hoppe.

Forget about learning any appreciation for the gold standard in a typical Economics 101 class. Standard economics textbooks portray the decisions of central bankers and bureaucrats as being data-driven, careful, and sophisticated. Sound money backed by gold and silver is likened to something too primitive and simplistic for a modern economy.

In reality, sound money is scorned by the economics establishment because it is more effective than any number of Ph.D’s at constraining debt levels in the economy and spending levels by government.

For students who are interested in sound money principles, there is some good news!

Money Metals Exchange is teaming up with the Sound Money Defense to help students pay for the ever-increasing costs of college. They have set aside 100 ounces of physical gold to reward outstanding students who display a thorough understanding of economics, monetary policy, and sound money.

The Sound Money Scholarship is the first gold-backed scholarship of the modern era.

It is open to high school seniors, undergraduate, and graduate students with an interest in economics, specifically the tradition of the Austrian school. The deadline to submit applications is September 30, 2019.