While motorists continue to enjoy the benefits of a longstanding supply glut in crude oil, car manufacturers are becoming increasingly worried about shortages. Not in liquid fuels, but in metals.

Many of the metals that play a critical role in both conventional and electric vehicles now face potential supply shortfalls.

Producers of conventional gasoline and hybrid vehicles are concerned about supply scarcity in another critical metal: palladium. 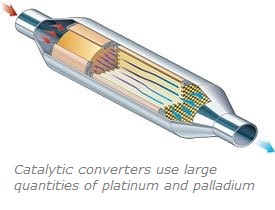 Automakers use palladium (and/or its sister metal platinum) in emissions control devices known as catalytic converters.

In recent years, most car catalytic converters have been engineered for palladium. It made a lot of sense to favor palladium when prices were low and supplies seemed plentiful enough.

Now the auto industry’s dependence on palladium is backfiring. Since 2016, prices for the specialty metal have more than tripled as supply deficits have widened.

The deficit is expected to rise to 800,000 ounces this year as palladium consumption reaches 11.2 million ounces while mining production lags and iffy Russian stockpiles dwindle.

Since automobile production accounts for close to 80% of total palladium demand, the industry can’t expect thrifting from other industries to close the deficit. Some industry leaders have suggested investing directly in the metals mining supply chain in order to ensure adequate supplies of palladium and other metals.

At present, just a few politically turbulent countries have near total control of the market for some key “energy” elements: China (rare earths), Democratic Republic of Congo (cobalt), South Africa and Russia (palladium and platinum).

Because these markets are so region-specific, industry-specific, and thinly traded by the public, they are difficult to forecast. The decision of a single large company could drive an entire boom/bust cycle.

This actually happened to the palladium market when it surged from the late 1990s into 2001 (hitting a record high that stood until 2018) on stockpiling by Ford Motor Company. Ford brought forward so much future demand that palladium prices spiked, then crashed.

In retrospect, it was a dumb move by the automaker. But fears of shortages and higher prices could again drive companies to make rash decisions.

Which Energy Metal Will Provide the Best Catalyst for Investors?

The question for long-term investors is which metal represents the best value. Which is cheapest on a fundamental basis, has the greatest opportunity to appreciate, and has the least likelihood of crashing?

Between palladium and platinum, the one that stands out clearly as being undervalued is platinum.

Since both metals have similar properties, are similarly scarce geologically, and perform the essentially same function in auto catalysts, we shouldn’t expect palladium to sustain a large premium over platinum. 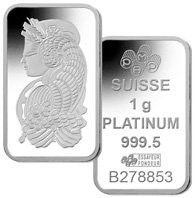 This July, the palladium price rose to a historically large premium of 2 times the platinum price before retreating.

For most of their history, palladium has sold at a discount to platinum. Platinum is used more in jewelry and is generally regarded as a more prestigious metal.

What ultimately matters for relative price trends, though, is whether the auto industry begins switching back to platinum.

Can cheaper platinum simply be substituted for pricier palladium? Yes…and no.

In theory, yes, platinum can be used instead of palladium in catalytic converters. But in practice, making such a substitution would require big up-front costs. And in some cases, larger quantities of platinum would be needed per retrofitted device than the quantities of palladium now used.

Some proponents of electric vehicles imagine that lithium and cobalt will be the metals of the future, with battery technology rendering catalytic converters unnecessary.

However, there is a big problem with that scenario – namely, that electric vehicles are uneconomic versus gas-powered vehicles. Worse (from the standpoint of environmentalists), studies have shown that higher-cost EVs leave an even bigger environmental footprint. Rising costs for battery metals will only exacerbate their disadvantages.

Palladium is projected to remain in a supply deficit for at least three more years. During that time, a price spike is possible.

Over a longer timeframe, the forces of supply and demand will likely work in favor of platinum. Patient investors who buy assets while they are historically undervalued and hold for the long run tend to do better than those who chase hot stories.