It appears that the two steps forward, one step backwards approach of mainland China isn’t working as Hong Kong citizens are protesting again. The increasingly violent protests have plunged Chinese-ruled Hong Kong into its most serious crisis in decades, and the situation appears to be getting worse every week. What does it imply for the gold market?

On Monday, Hong Kong’s Airport Authority canceled flights as demonstrators poured into its main terminal. What is going on in Hong Kong? The protests began over plans that would have allowed extradition from Hong Kong to mainland China. Although the bill was suspended, the protests continue, as people demand democratic reforms. The problem is that although Hong Kong – as a former British colony – still enjoys freedoms not seen in mainland China, they are on the decline. The protesters say that mainland China is meddling in Hong Kong, citing examples such as legal rulings that have disqualified pro-democracy legislators.

Another problem is that the Hong Kong’s leader is currently elected by a 1,200-member election committee, which is a mostly pro-Beijing body chosen by just 6 percent of eligible voters. And even this sham democracy could end in 28 years, when the period of a high degree of autonomy under the principle of “one country, two systems” negotiated in a deal regulating the status of Hong Kong with the UK expires.

The protests presents a serious challenge to mainland China. Most people identify not as Chinese, but as Hong Kongers, while some young activists have even called for Hong Kong’s independence from China, giving a real headache for the Beijing government and adding to concerns about the future of the Red Dragon.

China faces not only political but also, or even mainly, economic problems. The economic growth has recently slumped to its lowers level in nearly three decades. The trade war with the U.S. hit the GDP growth, but this is not the only problem. Another, and possibly the most important, is the exhausted debt-fueled growth. The China’s overall debt is enormous, accounting for about 15 percent of the total global debt.

As the chart below shows, the public debt (green line, left axis) is relatively low, as it remains below 50 percent of the country’s GDP. However, the household debt (blue line, left axis) has risen from 11 percent in 2006 to 49 percent in 2017, or almost fivefold in one decade. While the corporate debt (red line, right axis) surged from already high level 97 to staggering level of 157 percent. As a result, the total debt (purple line, right axis) is now above 250 percent, which is disturbingly high for a developing country. And this number does not even take all debt instruments into account! 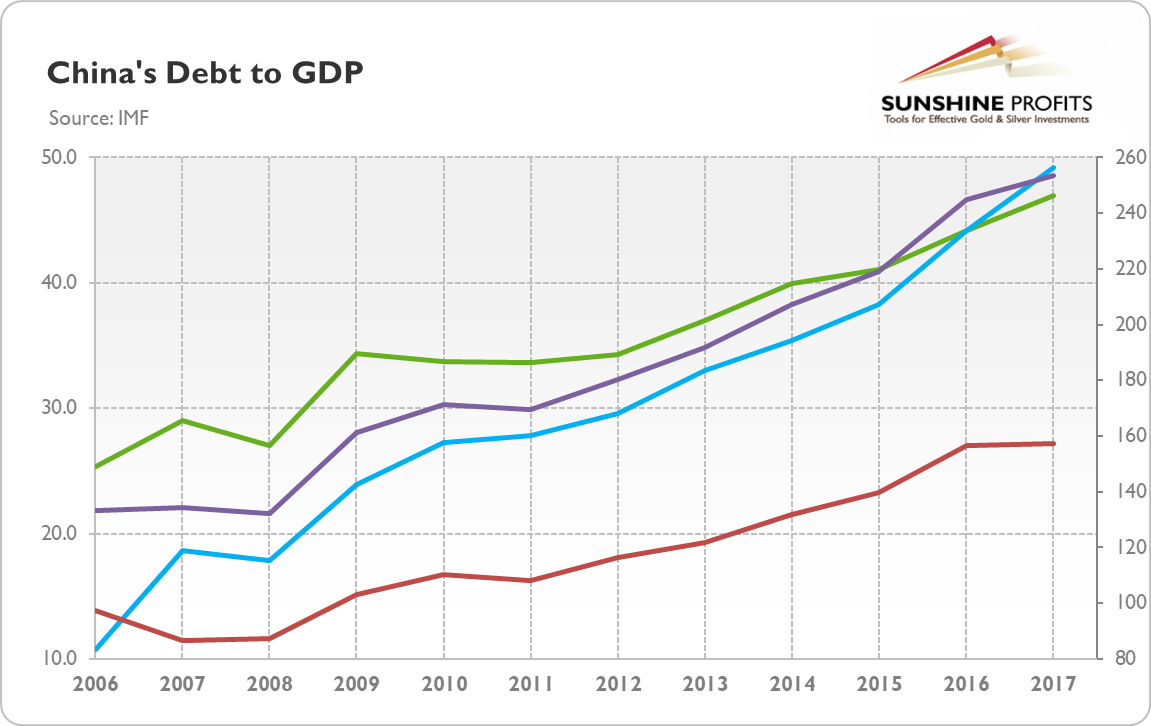 This debt-fueled growth is clearly not sustainable. Last year, defaults by Chinese companies hit a record high, while Chinese consumers started to worry about the rising household debt levels and hold off their spending.

Dark clouds are gathering over China. The country is facing economic slowdown and it may fall into the debt trap, which could hinder growth even more. The trade war with the States adds to the pain. And now, Beijing has to also deal with civil unrest in Hong Kong.

All these developments look fundamentally positive for the gold prices. China’s slowdown is already felt all around the world. German industrial production plunged 1.5 percent in June, the biggest annual decline in nine years. The slump was caused mainly by a decline in sales of machine parts and cars to China and the Far East. The slowing global economy should add to recessionary fears and make the major central banks more eager to adopt fresh dovish measures. Gold should shine, then.