‘When law enforcement refuses to enforce the law there is anarchy…’

Harris County authorities in Houston reel in a group of rappelling Greenpeace protestors.

Rep. Brian Babin, R-Texas, was beside himself.

Greenpeace activists opposed to the fossil-fuel economy closed part of the Houston Ship Channel on Thursday by dangling beneath the Fred Hartman Bridge, and no efforts were being made to capture them.

The congressman eventually got his wish. A SWAT team rappelled over the bridge and took them into custody, ending the high-wire drama above the oil-rich shipping lanes.

Babin complained in a press release Thursday morning about reports that the Harris County Sheriff’s Office was granting the environmentalist outlaws a 24-hour free pass instead of arrest.

“They should remove these protesters immediately. When law enforcement refuses to enforce the law there is anarchy, the very definition of lawlessness,” Babin said.

“Allowing this dangerous stunt to continue under the auspice of free speech will only encourage more illegal activity in the future,” he said.

He called on Gov. Greg Abbott to bring in the Texas Rangers if the Sheriff’s Office wouldn’t do its job.

“In addition to the danger they pose to themselves and others by blocking ship traffic on the ship channel and severely restricting vehicle traffic on the bridge, they are costing Texas job creators millions of dollars as long as this goes on,” Babin said.

Greenpeace’s extremist tactics often place the organization in hot water. It is a defendant in a North Dakota case for disrupting construction of the Dakota Access Pipeline, causing millions of dollars in damage.

A report on KHOU-TV quoted the Sheriff’s Office saying the protestors “will face multiple charges including obstructing the roadway and obstructing the waterway. The local authorities are checking with the U.S. Attorney General’s Office on other possible charges.”

Charges could be brought for a three-vehicle crash on the bridge after a van carrying the protesters partially blocked a lane, according to Precinct 8. One person was hurt.

KPRC-TV was among those showing video of the perilous stunt.

CNN reported 22 Greenpeace USA protesters were involved. Eleven suspended themselves from the bridge by bungee cords. The event was timed to make a statement to Democratic presidential candidates prior to a debate at Texas Southern University.

“We challenge every candidate on stage tonight to promise to hold the fossil fuel industry accountable if they become president,” and to transition to renewable energy, Greenpeace USA said on Twitter.

HAPPENING NOW: We’re in the heart of the fossil fuel industry (the largest oil export channel in the US) to confront Trump & the oil industry. 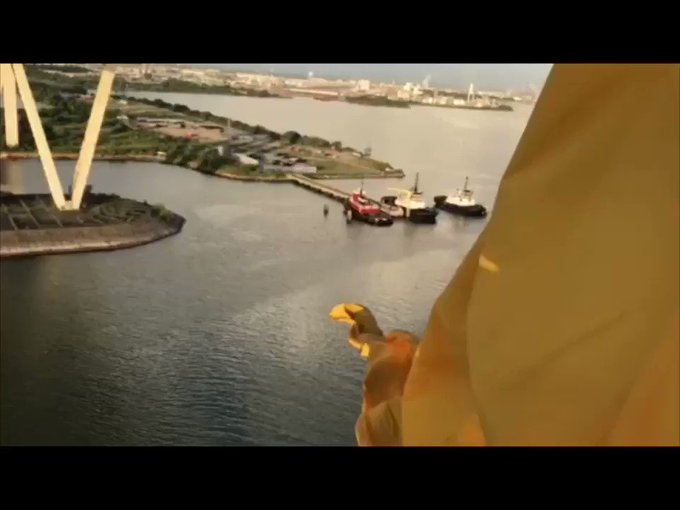