Skip to content
HomeSailing Through a Global Storm Without Enough Hot Air
By David Haggith – Re-Blogged From Great Recession Blog
As noted in my last article, “Fed Loses Control of its Benchmark Interest,” bank liquidity strains are written all over this month’s troubles. Some may find that hard to believe because there is so much hot air (fiat money) still floating the system from a historical standpoint. There is a sound fundamental reason, however, that a lot is not enough. The diminished money supply is simply not enough to keep the world’s huge asset bubbles (hot-air balloons) moving around. Simply put: if you move or convert a LOT of big assets, you need a LOT of liquidity in banks to handle those transactions. 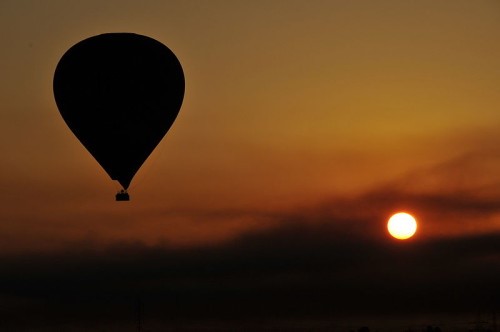 The Fed originally pumped up money supply in order to intentionally create these asset bubbles. They, of course, denied they were “asset bubbles” by calling them a “wealth effect,” wherein the Fed stated its intention was to pump up stock and bond markets so the wealth created in those markets, especially stocks, would trickle down to the rest of the economy. However, the new money didn’t trickle. It just recycled in those assets, bidding their values up even higher. As a result the Fed blew up huge asset bubbles — bubbles in that they were unsupported by economic reality and were just puffed up by free money looking for places to go. It didn’t create new products or new factories; it just went around in not-so virtuous circles.

So, tell me this: how can the Fed ever have reasonably expected it could suck the hot air out of those inflated markets and not deflate the bubbles? The Fed believed it could release the hot air (massive quantities of money created out of thin air) without deflating the hot-air balloons it created. I’ve always thought the idea that they could reverse their magic without reversing its effect was plainly illogical — so blatantly illogical that I could hardly believe they thought it was possible, let alone that the whole world would go along with them on that.

They stated as being their endgame clear back when Bernanke was chair. Their hubris or naiveté in believing they could pull that trick off before the watching world, caused me to say for years they had no endgame. Their recovery program was unsustainable because it would implode when they started reversing the magic. You cannot lift the entire economy with hot-air balloons and then think you can suck the hot air out and that the economy will somehow magically keep floating. It’s absurd!

Thus, what I think we are seeing happen right now is that the size and quantity of those assets exceeds the money supply that once blew them up. When more of those assets (a lot more) were moved (or converted to actual dollars) this month than usual, the banks were unable to move (or convert them) because there isn’t enough in reserves to back up the bubbles if too much moves from bubble to bubble at once. (That would be a larger-scale version of the problem you have when a bank doesn’t have enough reserves to back its loans or deposits if too much money moves at once.)

This liquidity crisis is still growing in that demand each day continues to exceed the Fed’s creation of new money. A liquidity crisis of this kind can create a terrible recession on its own if the Fed doesn’t get it back under control (and there is no evidence that they grasp what they need to do or, at least, that they want to admit it or want to do it). If banks don’t have enough money to carry out overnight transaction, you could see runs on banks and all kinds of other problems if people start to believe the pipes are getting clogged because they see the movement of their needed funds slowing down.

The Most Important Chart in the World

Quantitatively, this can be illustrated in the chart that is weighing most heavily on one bullish investor’s mind. Kevin Muir, strategist at Toronto-based East West Investment Management and author of the Macro Tourist blog, is unloading stocks because of this chart from Bianco Research showing the baseline interest rates of central banks around the world, which Muir refers to as “The Most Important Chart in the Whole World”:

The chart, says Muir, “Sums up the main problem – the US is too tight for the world economy.” It’s a complex graph, but the point is that the US dollar — in spite of the fact that it is the global currency — has the highest benchmark interest rate of any significant currency on earth. On top of that, the US sucked major money out of its reserves via the Fed balance sheet unwind, which no other country on earth has done. So, while everyone is inflating their already bloated asset bubbles and their balance sheets, the US has tightened the world’s most-in-demand currency.

“Want to know my main worry? The country with the world’s reserve currency has the highest policy rate out there in the developed world,” Muir wrote, pointing to the chart above. “If we look back over time, this has often coincided with market crises.”

Last week all sorts of shenanigans occurred in the repo funding markets…. Yeah, I know the argument that it’s not a big deal as the Federal Reserve was able to provide the liquidity the market was needing. But I worry about why they needed that liquidity. What changed in the financial system to cause that sudden need…? I worry there is too much hubris on the Fed’s part. I worry that just like the recent yield curve inversion, they are busy coming up with reasons why this time is different.

I think it may be as simple as you cannot move around the world’s largest hot-air balloons without a gargantuan money supply to make those moves. It is not just US bubbles that trade in US dollars, but all of these other bubbles in other nations, which trade mostly in their own currencies but interact via exchanges, etc., with the US dollar. If you suck the hot air (US dollars) out of all the world’s bubbles, I think you get a lot of flubbery balloons that no longer float along so nicely. Slowly, you fall out the sky into the darkness below. It could result in balloons starting to settle all over the world.