The Brexit saga continues. Both the U.S. and China’s industrial sectors suffer from the trade war. How will the Fed react to these downside risks tomorrow? The expectation is that it’ll cut rates, but will that really happen? And how will gold take to that?

Last week, we wrote about the Brexit saga, diving into the latest battles between Johnson and Parliament. But the drama has not ended yet. As we concluded one week ago, “Brexit is far from over, and British politics may surprise us again.” Indeed, Johnson wanted to call a snap general election in December to gain more leverage in the House of Commons, but the UK parliament has rejected Johnson’s proposal. For the third time. But Boris does not like losing, so he proposed today a new bill that lowers the number of MPs requires to pass the decision to hold an early election from two thirds to simple majority.

In the meantime, the EU agreed to the Brexit extension until the end of January 2020. Importantly, the EU offered a “flextension,” which means that the UK could leave before the deadline if a deal is approved by the British Parliament. Brexit is still far from concluded and snap elections could significantly change the political landscape. But one thing is sure for now, the possibility of a non-deal Brexit has been postponed until January 31, 2020 at least. This should reduce the safe-haven demand for gold, but also support the pound and euro against the U.S. dollar, gold’s nemesis.

Industrial Weakness in China and the U.S.

But let’s leave the United Kingdom, which is no longer an empire. Let’s focus on true powers: China and the U.S. China’s industrial profits dropped 5.3 percent in September, marking the deepest fall in four years, according to the National Bureau of Statistics on Sunday. The decline in profits shows the trouble for the world’s second biggest economy, partly caused by the ongoing trade wars with the U.S.

But it does mean that America is booming either. On the contrary, orders for durable goods fell in September 1.1 percent. On an annual basis, orders declined 5.4 percent, the biggest yearly drop-off since the middle of 2016, as one can see in the chart below. 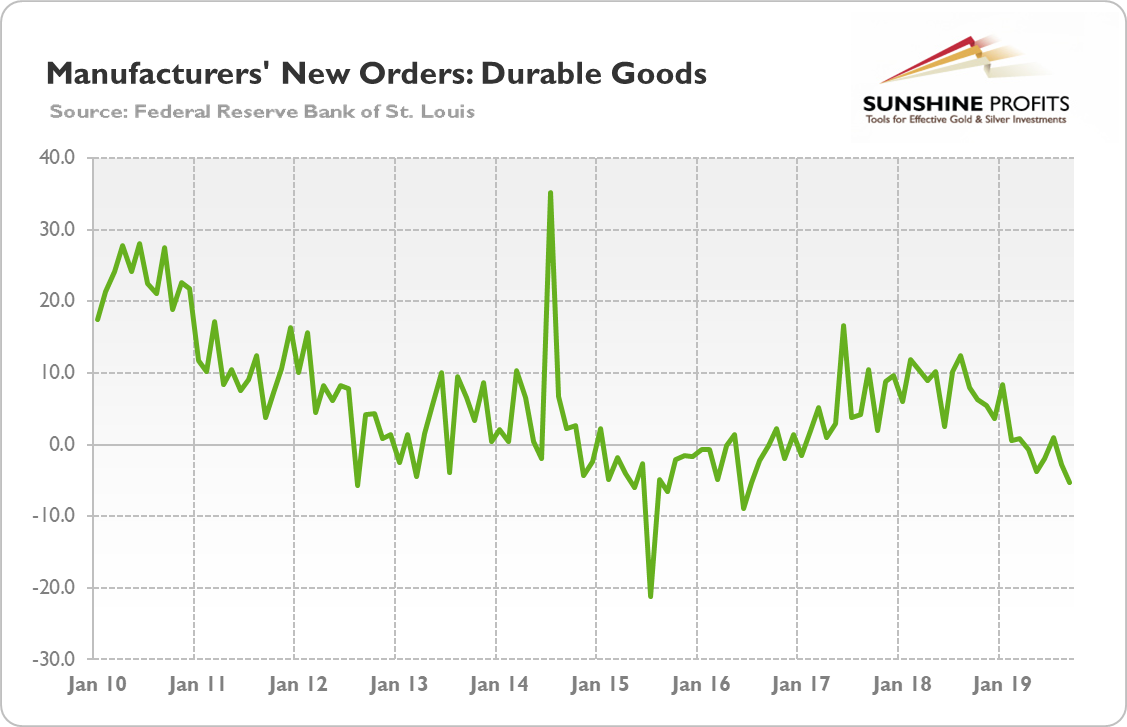 It doesn’t merely reflect the specific challenges of Boeing, but also a more widespread weakness in manufacturing. Both sides are losing in the trade war. Only gold can win, especially if the industrial slowdown translates into general economic downturn.

Now, all eyes are on the Fed. Tomorrow, the FOMC will announce its fresh monetary policy decisions. The market consensus is that the U.S. central bank will cut the Federal Funds Rate by another 25 basis points but it will introduce a more hawkish language, signaling the end of the “mid-cycle adjustment”. Indeed, the odds for a cut are more than 95 percent, according to the futures. As it seems that the gold market has already priced in an interest rate cut, it should not affect gold prices (https://www.gold-eagle.com/rate/price-of-gold/ ) substantially.

However, if Powell sounds more hawkish than expected, the yellow metal could struggle. Of course, the Fed Chair can also surprise on the dovish side, given the continuing U.S.-China trade conflict and shrinking business investment, but we think that the U.S. central bank would like to signal a pause after the third cut in interest rates this year. After all, the Fed hiked the federal funds rate four times in 2018, so it may not want to dial them back so quickly! But we will see – on Thursday, we will cover the FOMC announcement for you, stay tuned!