Let’s revisit a point that came up in passing, in the Silver Doctors’ interview of Keith. At around 35:45, he begins a question about weights and measures, and references the Coinage Act of 1792. This raises an interesting set of issues, and we have encountered much confusion (including from one PhD economist whose dissertation committee was headed by Milton Friedman himself).

Back in the 18th century, three facts were obvious and not questioned. One, gold and silver are money. Two, the paper receipt evidencing the deposit of money is not, itself, money. And three, depositors had the right to get their money back plus interest.

So many steps of adulteration of money—and mainstream thinking about it—have occurred since then, that these points are as clear as mud today. Just ask any economist what money is, or ask Google for pictures of money. It will give you only green pieces of paper. There is no right to redeem paper notes today. If you have a dollar bill, that’s the buck and it stops at itself.

We have addressed number one many times. Money is a commodity because only a physical good is final payment. Anything else (yes, including bitcoin) is pending the delivery of something physical. Gold and silver are money, whereas other commodities are not, because of their stocks to flows and bid-ask spreads.

Number two is confusing, because the dollar is not redeemable today. The paper note is no longer any kind of receipt. Back when it was redeemable, it was clear that the paper receipt was not the thing for which it redeemed. Like a coat check ticket is not a coat. Now that the paper receipt is treated as an end in itself, there is no longer a distinction between a receipt for money vs. money itself. So people understandably—if wrongly—think of the paper as the money itself.

And that segues into number three, the note does not represent a deposit of gold and therefore does not entitle you to get gold back. So most people tend to reify it. The government’s act of looting the gold of the savers, and making the paper receipts into irredeemable credit, would seem to have worked beyond President Roosevelt’s wildest dreams. It has had the benefit of creating a sort of NewThink. It has actually made people unable to conceive of a difference between a debt vs. the money used to pay said debt.

The Price of Gold

We have written a lot about this too. So we want to move on to the focus of this article. It is simple to say, but harder to wrap your mind around.

Back in 1792, the Coinage Act did not fix the price of gold at $20 (approximately) per ounce. The very concept of price implies a unit of measure, a numeraire. In the late 18th century, that was gold or silver. Prices were therefore expressed in gold. The dollar was merely a defined weight of gold. One does not ask, “How much does the ounce weigh?” Similarly one did not ask, “What is the price of gold?” 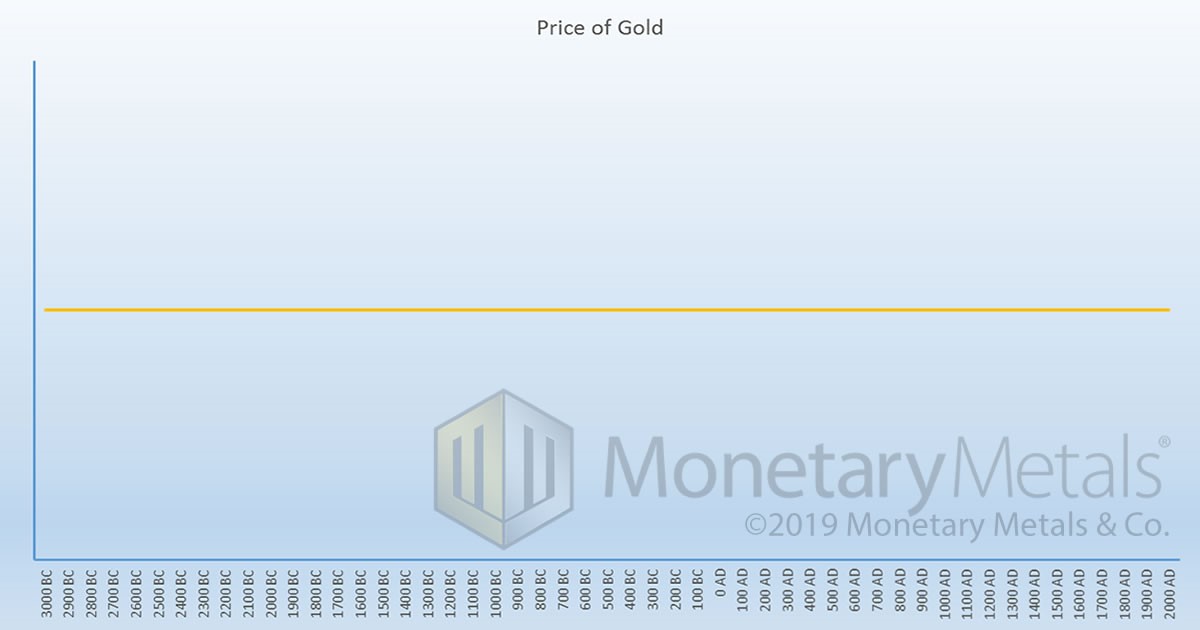 Unfortunately the 1792 Act contributes to this confusion. It defined the dollar also as a fixed weight of silver. Rather than contemplate two numeraires, it easy for us today to look back retrospectively and think of $20 an ounce of gold or $1.10 (approximate) an ounce of silver as their respective prices.

The Numeraire of Gold

In 1792, there was not such a thing as a dollar which existed independently from gold and silver. The unit dollar was nothing more than a weight of gold or silver. At the time, the question of a price of gold in terms of a separate currency (other than silver) would have been meaningless.

Today, the dollar is the irredeemable credit paper issued by the Federal Reserve. So of course there is an exchange rate of dollar to gold and to silver. This exchange rate changes over time, like any other price (and any attempt to fix it would be doomed to fail).

The conceptual problem comes from trying to superimpose this present reality anachronistically onto the context of 1792. Thus, the confusion exhibited by that pedigreed PhD monetary economist. He thinks that in 1792, the government fixed the price of gold. Or, expressed differently, that the government fixed the value of the dollar in terms of gold. He sees no problem with doing the same today (and wants to include other commodities, in the basket with gold).

The Standard of Gold

In 1792, the US government was acting like a Bureau of Weights and Measures (yes, we know the actual Bureau of this name was created nearly a century later). Everyone was clear that you could deposit gold and silver at a bank. And then the bank had to give it back to you under the terms of the deposit contract. The law merely standardized the units of money deposits.

For example, Mike Moneybags brings his sacks of gold coins to the bank. He then negotiates with Walter Workingman to do a job. Both have the same understanding of what $20 means (i.e. roughly one ounce of gold).

This is analogous to connecting your phone to a Wi-Fi hotspot. Everyone (well, the engineers who design these products) has a common understanding of what Wi-Fi means in terms of frequency, protocol, number of bytes in a packet, etc.

A standard unit for money or computer networking allows for compatibility, interoperation, and ultimately for the development of a large market. No one has to puzzle out if their phone is using the 1,500-byte version of Wi-Fi, but it’s not working because the hotspot is using the 1,501-byte Wi-Fi.

In our opinion, there is no need for the government to mandate such a standard (which, like all decrees is ultimately backed by a gun). Computer standards are not forced on unwilling companies and consumers. It just makes sense for the affected groups to form a standards body and come to agreement.

However, making a standard such as the 1792 Act did is basically benign (other than that it fixed the ratio of gold to silver, which had far-reaching and long-term consequences that ultimately culminated in the creation of the Fed in 1913, which story will have to wait for another day).

Today, of course, there are already two perfectly adequate ways to measure an amount of gold. We can use troy ounces or grams (Monetary Metals prints account statements in ounces). There does not seem to be a compelling need for a new monetary unit of weight of gold.

What would not be benign is a law to fix the exchange rate between the dollar and gold (or the Fed to try to fix or manage it). Or a basket of commodities, including gold. Everywhere and always (to appropriate Friedman’s phrase for a proper context), price-fixing schemes fail. Even when the central bank has a printing press, and would seemingly have the power to print an unlimited quantity of its currency to keep it down. Here’s looking at you, Swiss National Bank. Whatever form the new gold standard will take, a price-fixing scheme to the failing paper currencies will not be that form.

Money Is a Moral Institution

Anyways, this leads us to frame the issue in moral terms. Yes, at root, the questions of money and credit are moral questions: what is honest, what has integrity, and what serves justice.

The quantity of the stuff we call “money”, the ratio of a bank’s vaulted gold to its deposit liabilities, the right rate of interest, etc. are all to be determined honestly and fairly in an open and free market. People should have the right, but not the obligation, to deposit their gold and earn interest on it. Or hoard it under the mattress. Or pay a vault to store it and keep it safe. Companies who borrow it—and the financial intermediaries who make borrowing efficient—owe a duty of care including full and transparent disclosure as to the use of proceeds.

We propose four criteria for honest credit: (1) the lender knows he is lending his money, (2) the lender agrees to lend, (2) the borrower has the means to repay, and (4) the borrower has the intention. Honest defaults can happen, if there is a mistake in execution or the market changes. But it is an act of counterfeiting to take gold from savers, to spend it, and expect more to service the original debt. This is not a proper loan.

Generally, a borrower should be financing a productive asset, such as a factory.

In other words, nearly the opposite of what we have today. The saver does not know he is lending, thus insists that if he holds a paper dollar bill he has money. Few savers would agree to fund to the welfare state, if they did know. And of course, the government issues this ever-increasing pile of irredeemable paper currency in order to feed its ever-growing appetite for welfare programs, and subsidies by other names.

We will close with a quote from Ayn Rand: