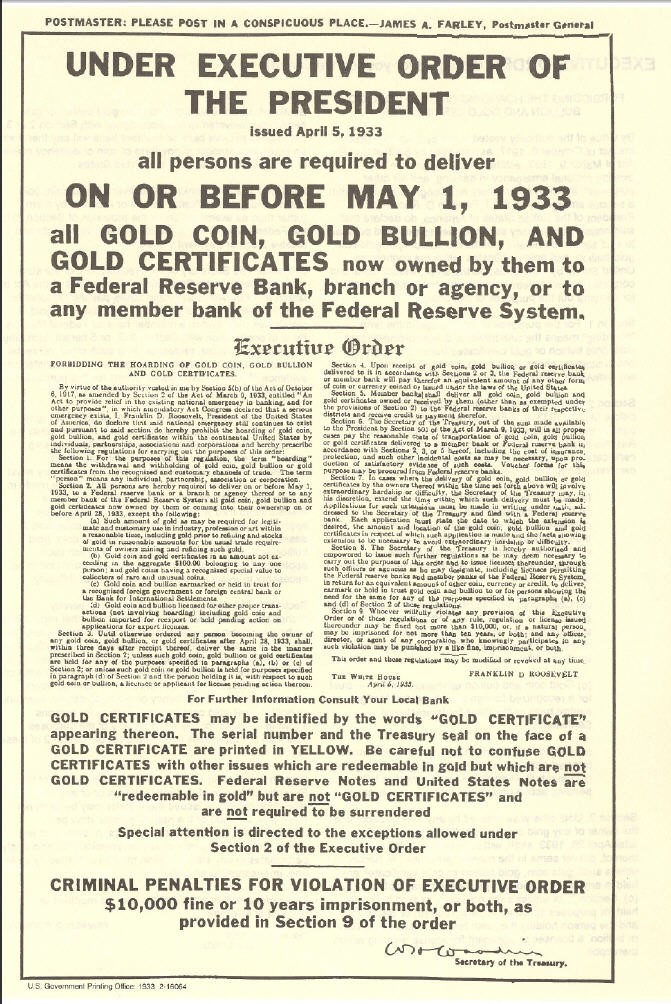 Many people have discussed the Dow to gold ratio. It fell from over 40 in the year 2000 when the DOW (11,750) was expensive, and gold sold for less than $300. In those days paper assets (DOW, bonds, S&P500 stocks) looked like they would rise forever.

The ratio rises and falls in long waves.

If your savings and retirement are based on stocks or gold, whether the ratio rises or falls is important. 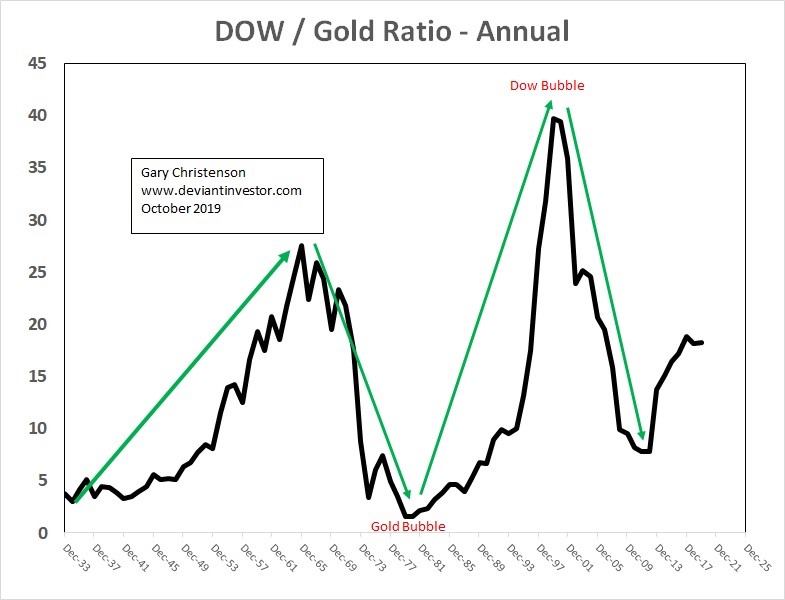 BASED ON NEARLY A CENTURY OF EVIDENCE, WE KNOW:

WHAT WILL HAPPEN DURING THE NEXT DECADE TO THE DOW/GOLD RATIO?

Will the ratio rise because gold prices languish while the DOW streaks to 50,000 as the elite would prefer?

Will the ratio fall as stocks and bonds implode when the “everything bubble” collapses? Capital will move to something safe—like gold—universally appreciated, with limited availability, and historically a store of value. Best of all, gold and silver have no counter-party risk from dodgy debt, devalued currencies, negative interest rates, corrupt politicians, bankruptcies, and phony promises. 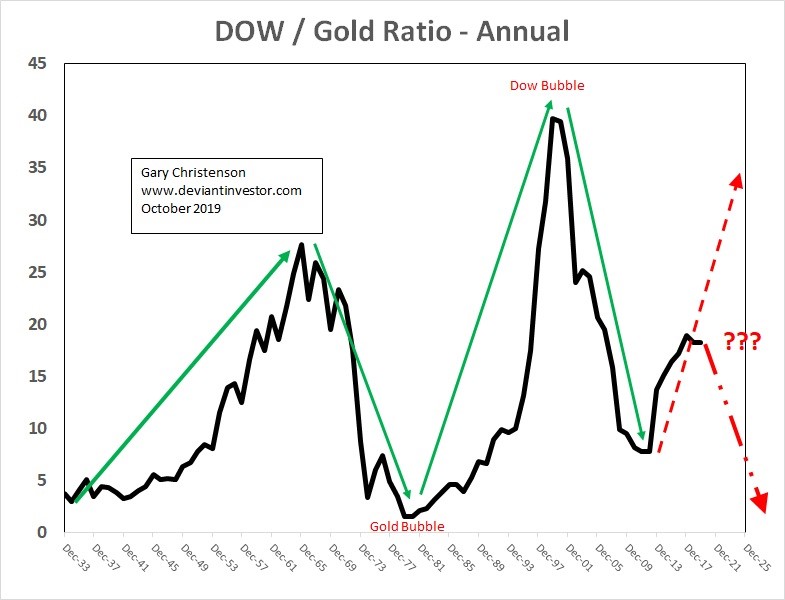 Central bankers and commercial bankers create currency units by the trillions, but gold is difficult to locate and mine. Central bankers and politicians prefer digital currency units under their control rather than the discipline of gold. Perhaps they can “stimulate” the digital currency system for several more decades. But people might panic out of overpriced stocks, bonds and leveraged real estate and demand something real, proven, and valuable.

The Dow to gold ratio, based on the graph, could rise or fall from current levels. Look at the inverse – the gold to DOW ratio for the past 85 years for more perspective. 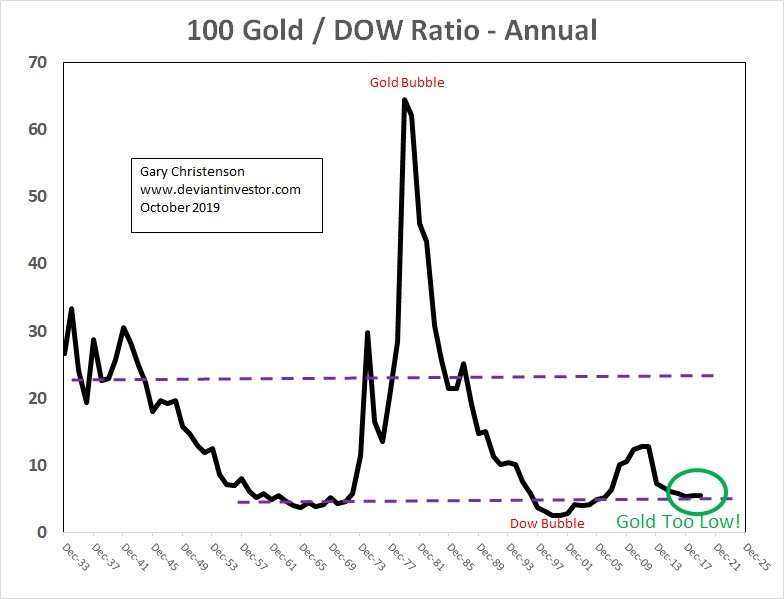 The above graph shows us that gold prices are too low, and the DOW is too high. Expect a reversal.

The silver (times 1000) to DOW ratio looks like the gold/DOW ratio. Silver prices, in October 2019, are over 4 times higher than their low in 2001, but compared to the DOW, levitated by trillions of central bank created currency units, remain low. 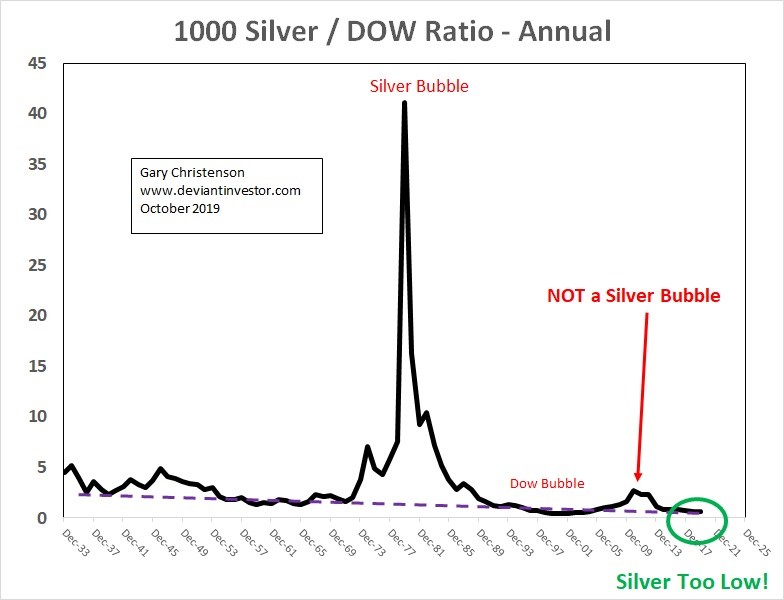 “Evidence mounts that the global credit cycle has turned towards its perennial crisis stage. This time, the gathering forces appear to be on a scale greater than any in living memory and therefore the inflation of all major currencies to deal with it will be on an unprecedented scale. The potential collapse of the current monetary system as a consequence must be taken very seriously.”

“The Fed is Lying to Us”

“It’s critical to understand that the central banks cannot print up prosperity. All they can do, being redistributive organizations, is take purchasing power away from one side and hand it to another.”

Our central banker controlled monetary system runs on debt and credit. The Fed has created $ billions since last month from “thin air.”

From Bill Holter: “… a credit meltdown is a mathematical certainty. The only question is when…”

The stock market has risen since early 2009. It is vulnerable to an “everything bubble” collapse. The Fed understands that “Inflate or Die” and QE4ever are now critical.

There are no guarantees, but the above considerations suggest higher gold prices and lower DOW prices. Look for the DOW/Gold ratio to fall below 5.

When? We don’t know, but the economy and financial systems look dodgy. Economic nonsense can persist for a long time, but the correction, when it inevitably arrives, can be rapid and deep.

Would you prefer debt paper that “pays” near-zero or negative interest?

Do you like loans that will be repaid in currency units guaranteed to be worth less than when the currency units were loaned to sovereign governments?

Or would you prefer gold coins and bars that have retained value for thousands of years?

Most people will choose devalued currency units, over-valued stocks, dodgy bonds, debt paper yielding little or nothing, and sweet-sounding promises. It reminds me of choosing cocaine over nutritious food, hard liquor instead of intelligent thought, and opioids rather than exercise.

“You pays your money and you takes your choice.”

Sensible readers will “insure” their assets and retirements with gold and silver. Call Miles Franklin at 1-800-822-8080 for precious metals.