I’m sure most of you are inundated with “Black November,” “70% off” and “clearance” email promotions from the usual cast of brick/mortar/online chain retailers. It started with my inbox in October.   This is because retailers are terrified of what could be one of the worst holiday spending seasons in years.

The mainstream financial media, planted with sound-bytes from Wall Street snake-oil salesmen, have already created this year’s “the dog ate my homework” excuse for poor holiday spending with the absurd notion that the period between Thanksgiving and Christmas is shorter this year.  Quite frankly, I would not be surprise if many households used Amazon’s Prime day and easy Amazon credit lines offered to buy holiday gifts early this year.

Speaking of AMZN, it warned that its expected holiday sales would be lower than previous guidance.  And Home Depot lowered its Q4 revenue estimates for the second time in three months.

Keep in mind that a survey of more than 5,400 Americans by the Financial Health Network revealed that 70% of households are struggling financially in some capacity. 17% said they can’t maintain a majority or all aspects of their finances. Another 54% said they’re struggling with at least one aspect of financial stability (likely credit card/auto debt). About 20% of middle class workers are spending more than they earn. This study confirms and reinforces other studies I’ve seen showing similar results.

Core retail sales, which are ex-automobiles and gasoline, increased 0.1%, which was worse than expected. When you think about it, aside from all of the statistical errors from estimating 16 out of 25 categories, the core retail sales ex-inflation was negative. It looks like gasoline sales drove the headline number as it was up 1.1%, which is the result of higher gasoline prices during the month.

Away from food, “core” discretionary categories suffered rather large declines from September. Clothing was down 1%, sporting goods/hobby/books were down 0.8%, furniture store sales dropped 0.9% and electronics/appliance sales were down 0.4%. Consumers also cut back spending at restaurants and bars, with sales dropping 0.3%.

The retail sales numbers for October, preceded by the big drop in retail sales in September, reflect and confirm my view that the consumer is “running out road” with the ability to assume more credit card debt for discretionary expenditures. The results of the survey above suggest that a not insignificant percentage of households need credit cards to make ends meet. This chart nicely summarizes the U.S. household financial conditions: 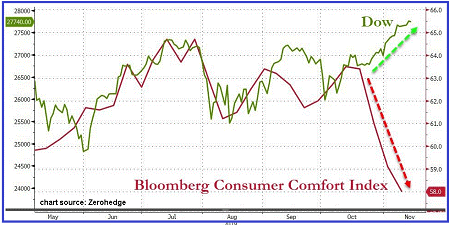 I suspect the Census Bureau will do its best to impose “seasonal adjustment” distortions at Trump’s behest in order to put the best possible spin on retail sales. But truth is that a majority of households are struggling with a heavy debt load and with real income after taxes that barely covers non-discretionary expenditures. Do not mistake a rising stock market as an indicator that economy is healthy. Right now the largest component of economic activity at 70% of GDP is terminally ill financially.