A great man passed away. Literally. Paul Volcker – who died on Monday, probably due to prostate cancer complications, at 92 – stood 6 feet and 7 inches high, or more than 2 meters. But Volcker’s impressive height wasn’t the only thing he could boast of. Our Readers are aware that we are not fans of central bankers, but we have to admit that Volcker not only literally but also figuratively cast a long shadow across the Fed, standing out by both past and current standards.

First of all, Volcker was probably the last Fed Chair that we could even remotely describe as the monetary hawk ready to fight inflation. As David Stockman wrote

Volcker accomplished this true anti-inflation objective with alacrity. By curtailing the Fed’s balance sheet growth rate to less than 5 percent by 1982, Volcker convinced the markets that the Fed would not continue to passively validate inflation, as Burns and Miller had done, and that speculating on rising prices was no longer a one-way bet. Volcker thus cracked the inflation spiral through a display of central bank resolve, not through a single-variable focus on a rubbery monetary statistic called M1.

So, this is why you have heard about Greenspan’s put or Bernanke’s put, but not about the Volcker’s put. The latter was not a hostage to the Wall Street (at least not in such an obvious and shameless way as his successors).

And Volcker also demonstrated political independence (yes, Reagan supported him, but many influential politicians wanted to take him down). As a reminder, he lifted the federal funds rate to 22 percent to tame double-digit inflation, as the chart below shows. 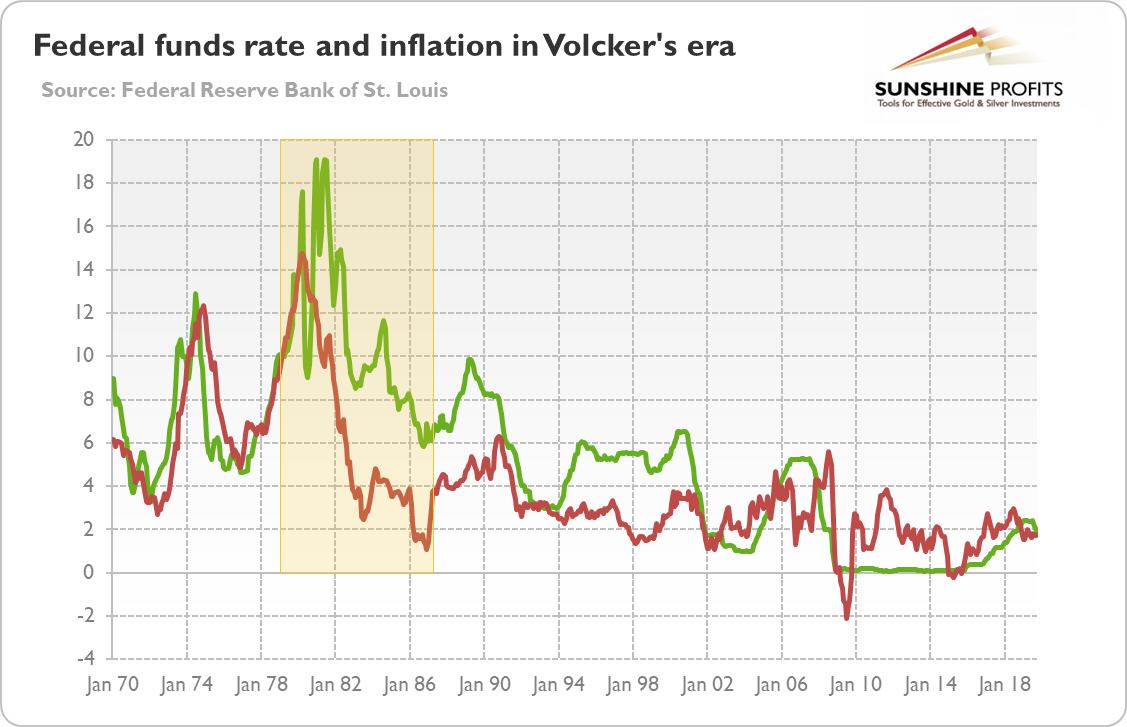 Yes, you read it correctly: twenty two percent. So Volcker had the courage to do the right thing, even when it was immensely unpopular (there were even “Wanted” posters targeting Volcker for “killing” businesses) and led to a short-term recession. As William Poole, the St. Louis Fed President wrote in 2005,

Without his bold change in monetary policy and his determination to stick with it through several painful years, the U.S. economy would have continued its downward spiral. By reversing the misguided policies of his predecessors, Volcker set the table for the long economic expansions of the 1980s and 1990s.

Now, compare Volcker to Powell, who got scared of several Trump’s tweets and modest corrections in the stock market and reversed the monetary tightening when the target for the federal funds rate was at mere 2.25-2.50 percent. Real hawks are gone.

This is, of course, positive for the gold prices from the fundamental perspective. The Fed shows more and more pronounced dovish bias. We know that inflation is much lower than in the Volcker era, but we bet dollars to doughnuts that even if inflation soared above 10 percent again, we would not see even approximately similarly strong Fed’s response as Tall Paul delivered.

Another positive factor for gold prices are low real interest rates that declined due to Volcker having won the fight with inflation and restoring credibility in the U.S. monetary policy. However, this is also the gold’s curse. Thanks to Volcker, the Fed still enjoys relatively high prestige and investors’ trust. Hence, it seems that the dovish bias is not enough to spur a rally in gold. The yellow metal needs a grave Fed’s error or an economic crisis that will shake investors’ confidence and direct people toward safe-havens.