Ever since Sept. 19, 2008, when Hammerin’ Hank Paulson appeared in front of the U.S. Congress on bended knee and begged those clueless politicians for a bailout—which he did successfully—the spread of moral hazard throughout the world has been a contagion that makes the Bubonic plague appear as harmless as the common cold.

That was, in fact, the day that shall go down in fiscal infamy as a most dangerous precedent was etched into the fabric and soul of the U.S. financial system. Not only did it set the behavioral course for the banker-politico alliance, it laid out as an insidious blueprint the operation manual for treasury departments and central banks around the world, the result being where we are today, a global economy teetering on an Mount Everest of debt with no solution on any horizon. 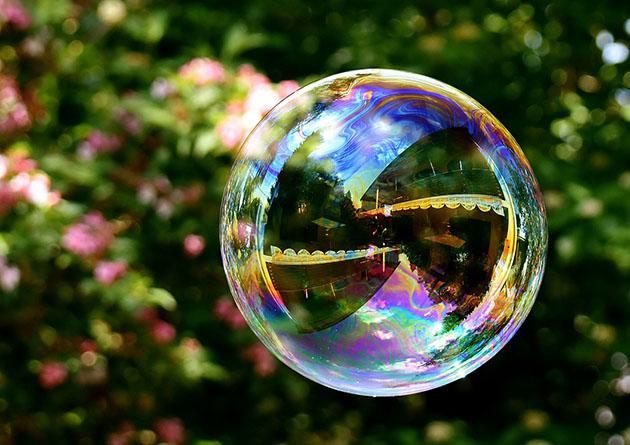 This week the investor class has seen the continuation of an advance in that began with the first whispering of the phrase “repo operations” in September, the realization of which did not manifest itself until late October, when I penned the missive “Q4 Guesstimates.”

As I wrote in September, “I have the feeling that the PPT, with DJT at the helm, is going to go all-out in making damn sure that we have a booming stock market going into 2020, so that his re-election chances don’t suffer from the ‘It’s the economy, stupid’ misfortune suffered by George Bush in his re-election run against Bill Clinton.”

That was written on Oct. 20, 2019, with the S&P 500 at 2,986, and with investor sentiment completely undeterred by the Fed liquidity binge. Fast forward a paltry ninety days and $400 billion in repo injections, and here we sit now, at 3,316. Upon reflection, the only words that come to mind are “mission accomplished”, a phrase used all too lightly by our leaders these days.

I was sitting in the big bay window overlooking the frozen expanse that is now Lake Scugog last night and was immediately reminded of just how much difference a year can make. This time last year, there were dozens of fishing huts standing all over the lake as temperatures were well below freezing for three solid weeks. This year, the lake is vacant of all fishing, snowmobiling and walking, but quite amenable to swimming should you be brave enough to venture out.

This time last year, stock investors were stunned, like deer caught in the headlights, with bullish consensus around 20-something, and the CNN Fear-Greed index at a highly traumatized 26.

With the greed “needle” now at 97, it is truly amazing just what a difference an “accommodative Fed” means to investor psychology, price-to-earnings (P/E) multiples and bubbles. It is also important to remember that the bears have been pummeled like rented mules since March 2009, and only during one brief period in late 2019 have they enjoyed the warm glow of being “right.” They have sold a great many books and newsletters crying “Wolf!” as we all too well know.

The chart you see above is a classic illustration of how these charlatans sell the unsuspecting investor using fear over greed as their hook. Do you ever wonder why Harry Dent is constantly writing about the “upcoming deflationary collapse?” It is because “doom and gloom” sells way more books than “good times are here again.”

My beloved precious metals are doing their utmost to stave off the villainous attacks by the banker-politico alliance, but I am forced to respect history, despite the protests of dozens upon dozens are quasi-expert bloggers who point fingers and snigger maniacally at my seemingly unfounded caution. What the trolls fail to “get” is that I am actually 70% invested in physical gold and silver and a bunch of juniors—as in, I’m not exactly “short” or “out,” just cautious. 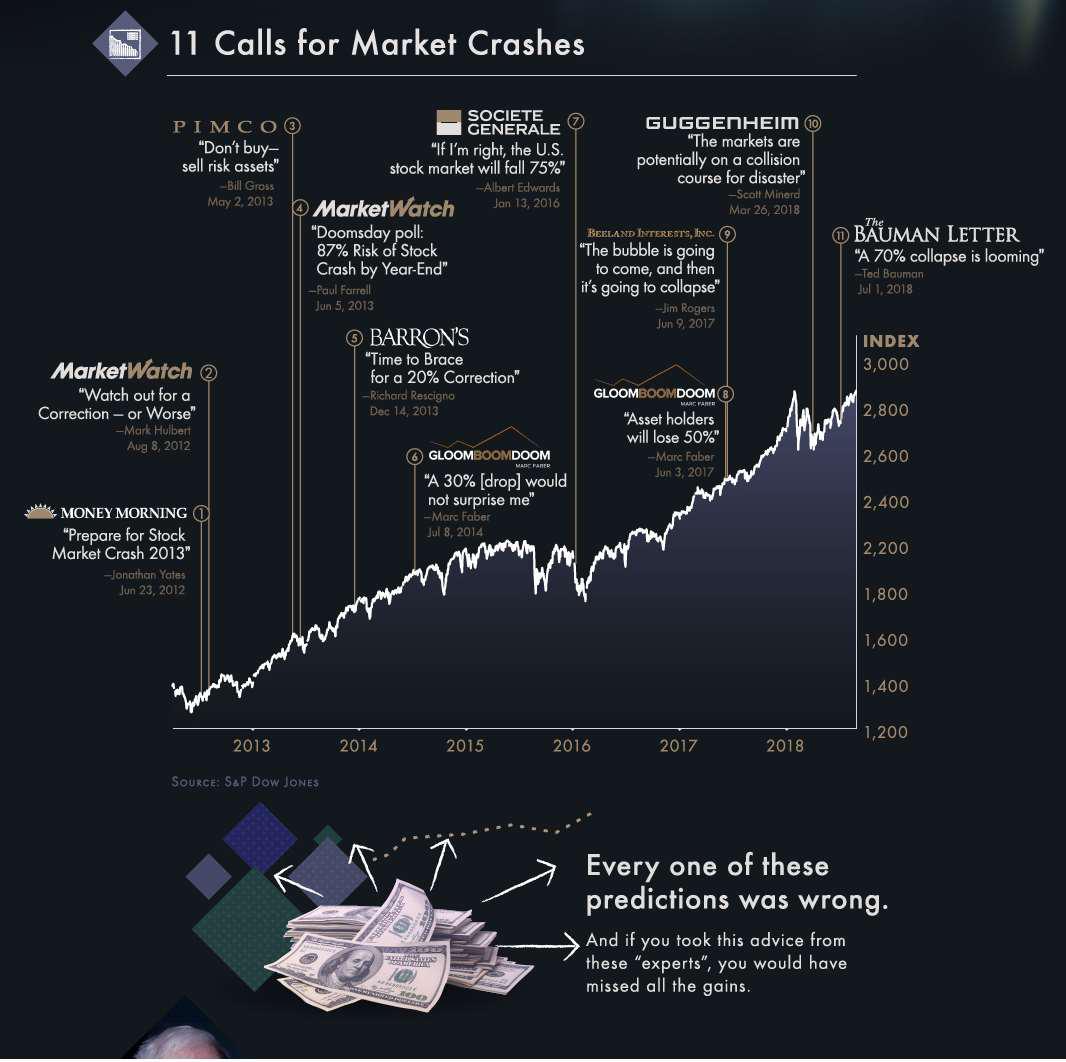 Gold remains in an uncontested bull market and its price action is even more impressive given the “risk-on” status of the equities crowd. If you had told me in November that the S&P would be above 3,300 and the Dow 700 points from 30,000, I would have pegged gold in the mid $1,300s. But its resiliency is a testimonial to the reflationary actions of the Fed. The Fed needs velocity to kick in, and is prepared to let the economy run “hot” to secure it. 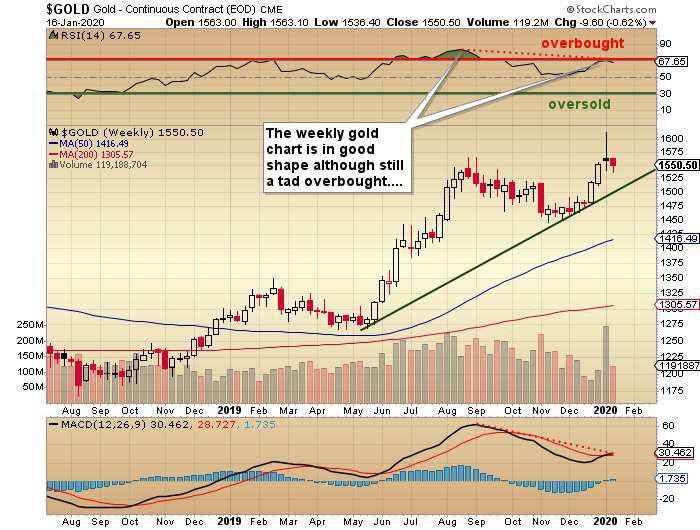 Silver remains locked in a consolidation pattern, with US$18.50 as a near-term cap and the 50-day moving average (dma) as the near-term support. As a trader I am comfortable being long physical and selected silver equities but uncomfortable with leveraged positions until we break out of the pattern. Stated another way, there is no reason to sell that which I own, but no reason to either add more or own futures, options, or leveraged exchange-traded funds (ETFs).

That said, the longer we consolidate within this elongated pennant formation, the bigger the advance once it is resolved. I must confess that silver’s performance since I resumed my bullish stance in November has been a mild disappointment. The gold-to-silver ratio is mired in the mid-80s (86.33), unable to give the entire metals complex that much-needed adrenaline boost to clear the logjam in the HUI and in the Junior and Senior Gold Miners ETFs, which still reside well below my exit points from the Jan. 8 key reversal day. 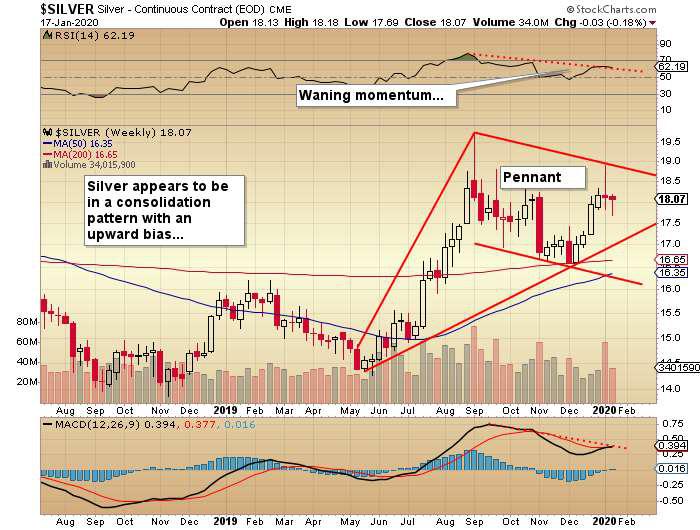 This week’s COT was largely a non-event, with Commercials covering a modest 6,262 contracts in gold but adding 1,183 contracts in silver. Both aggregate positions held by Commercials remain bearish, which is yet another reason for caution in my trade setups.

Note the chart below that depicts the history of Commercial/Large Spec positioning versus price behavior dating back until 2017. It is so obvious to even an amateur technician how the aggressive Commercial shorting has capped price.

However, note the yellow arrows depicting the most recent price decline but virtually no change in the aggregate shorts held by the bullion banks. Is this because we are simply in a new bull market, or is it because the banks are desperate to keep a lid on price due to central bank repo activity? Whatever the explanation you choose, it is strange behavior and an aberration, certainly since 2011. 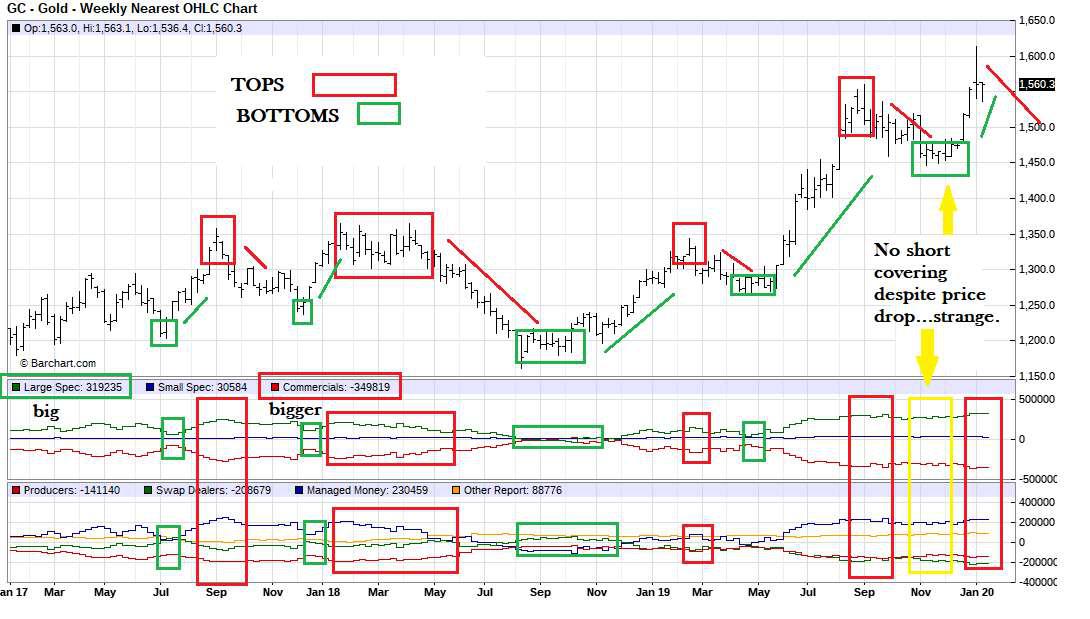 The S&P weekly chart goes back to 2017, and clearly shows a pattern of how corrections are born from elevated relative strength index (RSI) readings. I said that the gold chart looked “a tad overbought,” but the S&P chart is more overbought than last summer, just before it took a Q4 20% haircut. . .until, of course, Smilin’ Stevie Mnuchin mobilized the Plunge Protection Team (PPT) and saved Wall Street bonuses for 2019.

I have initiated a small put position on the S&P by way of the SPY March $300s. I started with a small position and am attempting to scale in to a larger one. The dilemma I have is that I hate adding to a losing position, which I lectured you all about in Email Alert 2020-09. (It is just so tempting to try to time this pending correction. . .) 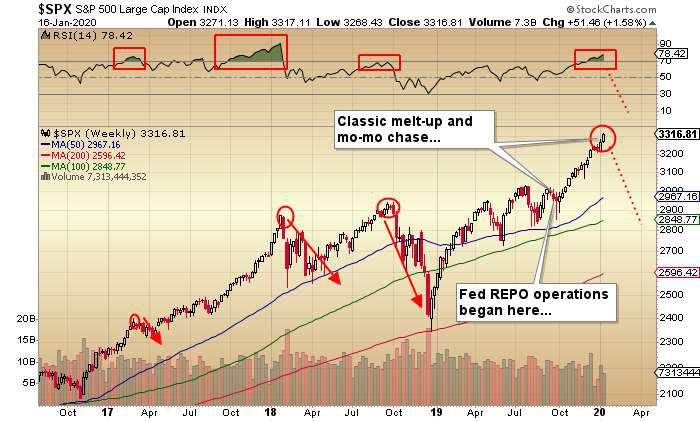 To repeat for clarity purposes, I am trying to buy physical gold and silver below the market to secure a better entry point for all subscribers. (Voice from the back of the room: “Yeah, you and 20,000,000 other guys too!”) Having said that, rest very unassured that there is no guarantee I’ll be successful. But at the same time, missing a trade is better than doing a trade that winds up losing.

Next week will be important in that there are several items of interest on the news blotter, and if there are changes that need to be made, you will receive my instructions through the Email Alerts. As I sign off, an often-used quote that gets thrown around a great deal is, “May we live in interesting times,” and it is usually a segue to one’s opinion on geopolitics, religion or controversy. Lately, financial pundits have been using it as a way of obfuscating their current outlook for the global financial markets, so when I hear it uttered with brazen disregard for history, I am forced to laugh.

Why, pray tell? It is actually a Chinese curse. . .