In the red corner, unpayable debt threatens to crush the US economy, stock and bond markets, and main street Americans.

In the green corner, the levitating power of the Fed might save the economy, stock and bond markets, and Wall Street Banks.

Red or green? Who wins?

Miles Franklin sponsored this article by Gary Christenson. The opinions are his.

Can one, or even five $trillion of additional QE and “not QE” save stock and bond markets from their over-bought, over-valued bubble status? Will massive QE bring inflation or hyper-inflation? Can Fed currency creation delay a recession and reelect President Trump? Will those created currency units prevent American voters from electing socialists who will… oh never mind…

Rather than read the tea leaves and discern possibilities for 2020, look at what we know, what worked in the past, what will continue… 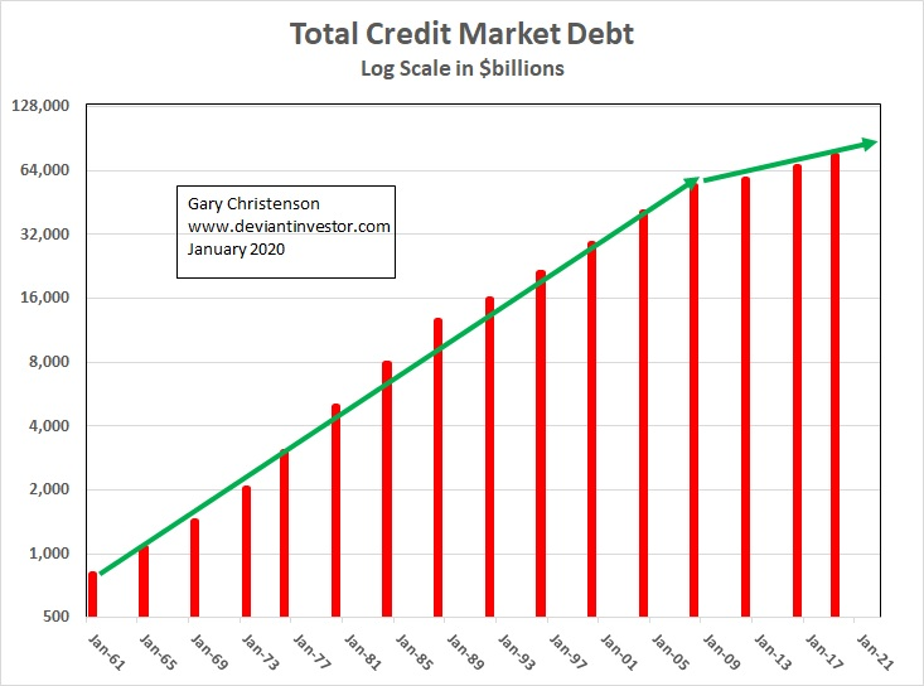 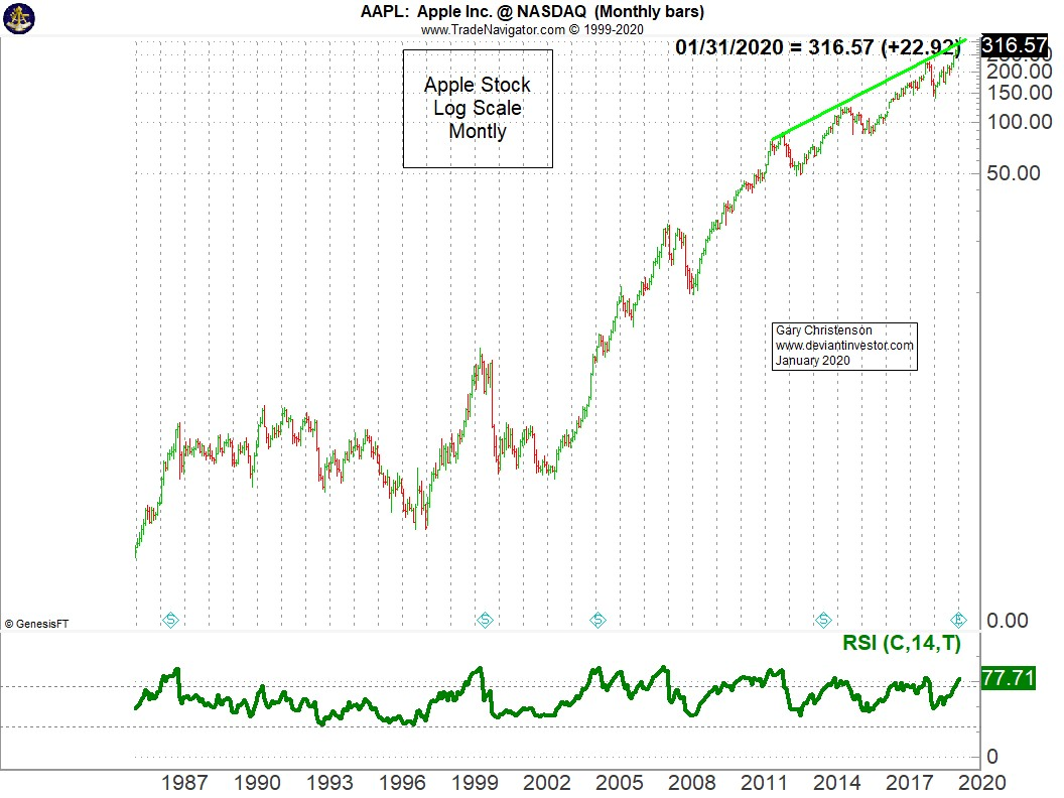 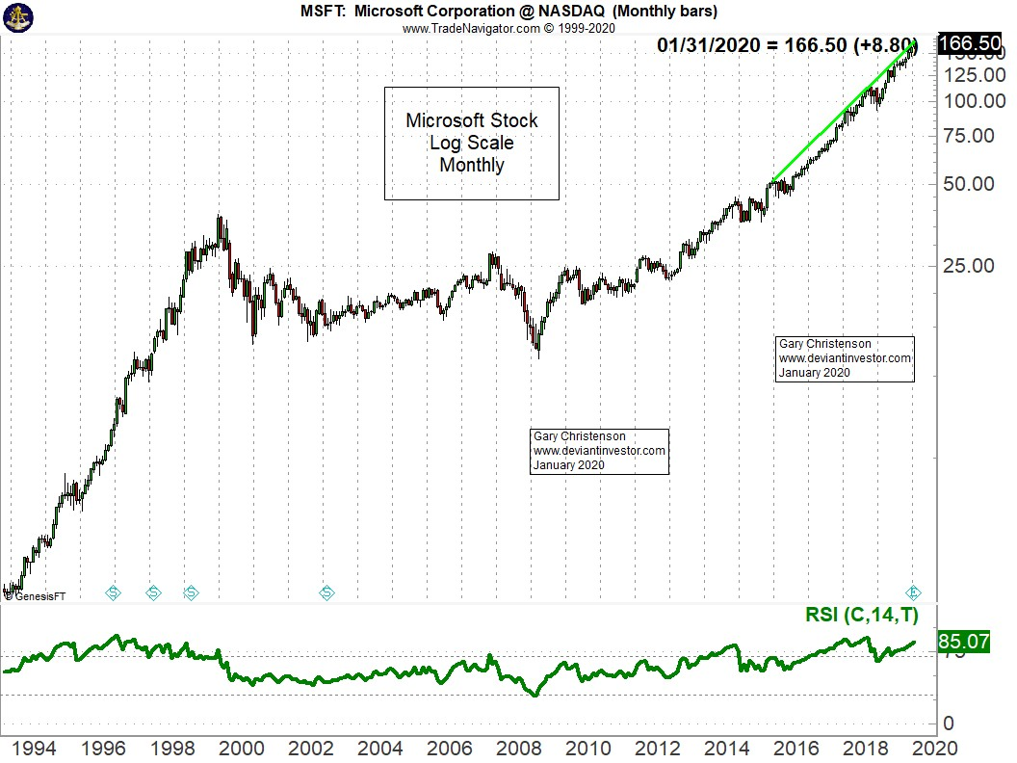 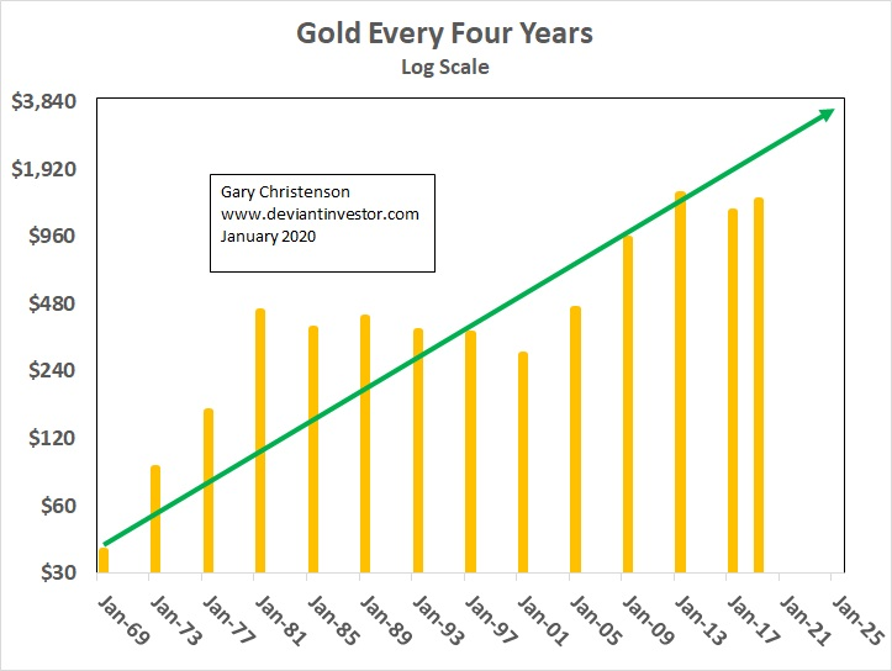 A DETAILED LOOK AT APPLE AND MICROSOFT STOCKS

The 14 period RSI (relative strength index) is a timing indicator (from 0 – 100). When over 70, markets are often at or near a peak. Note the red circles on the monthly and weekly charts. 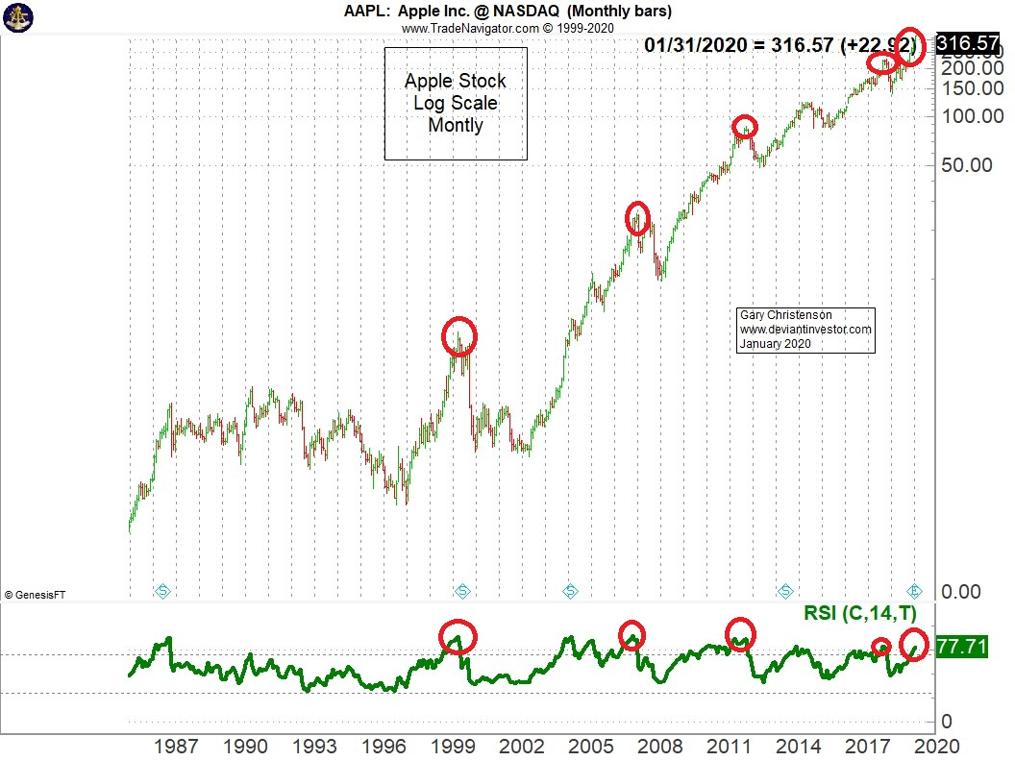 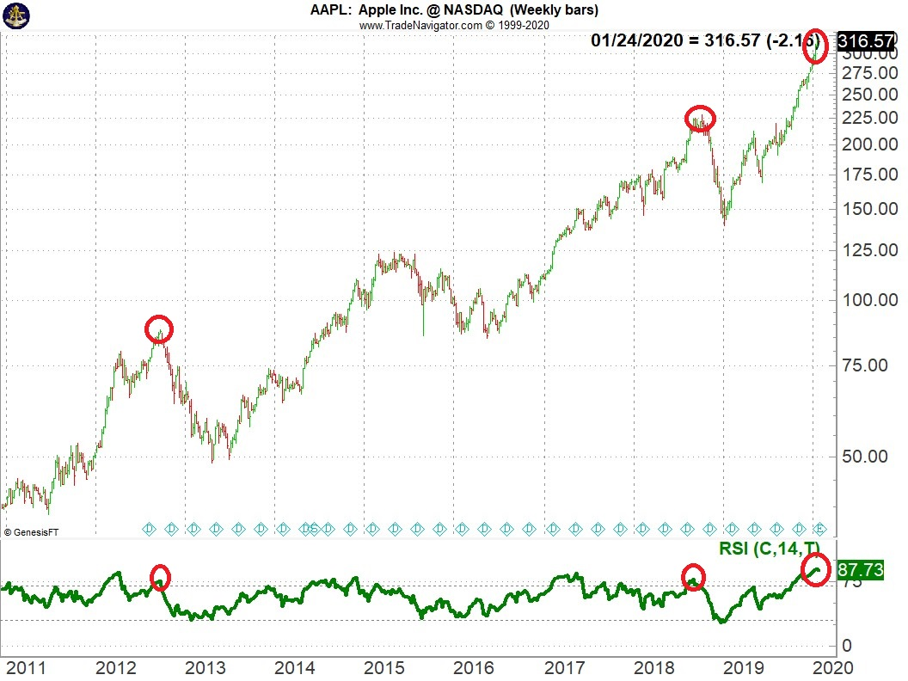 A high monthly and weekly RSI shows a danger zone, not a guarantee of a correction. 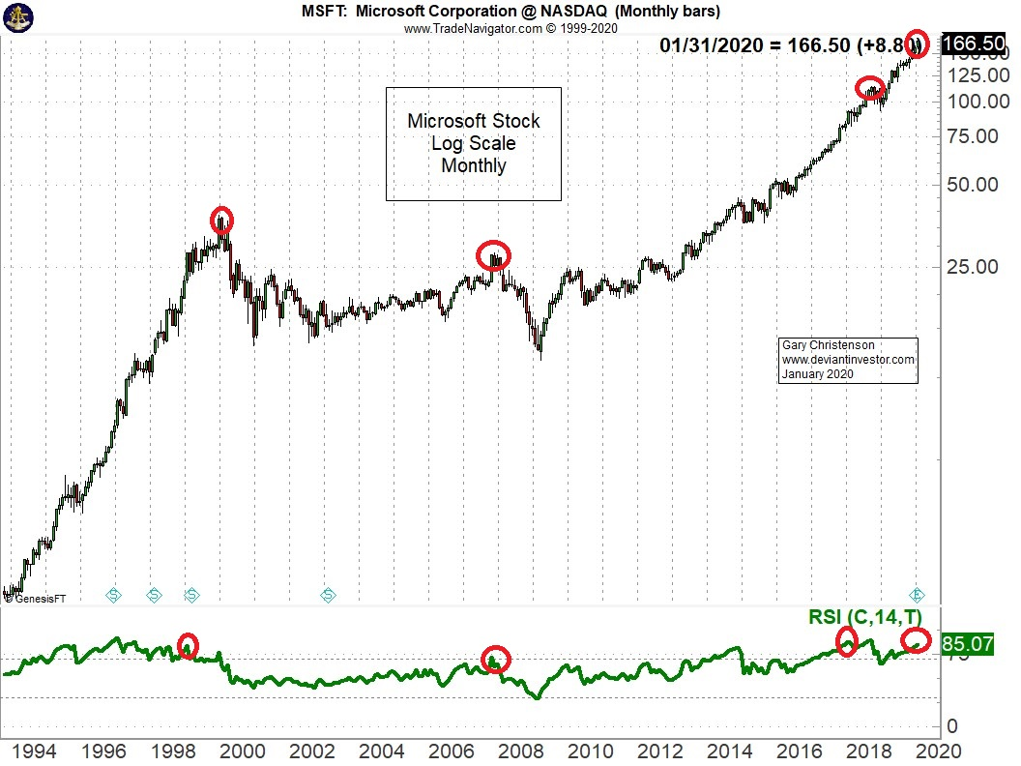 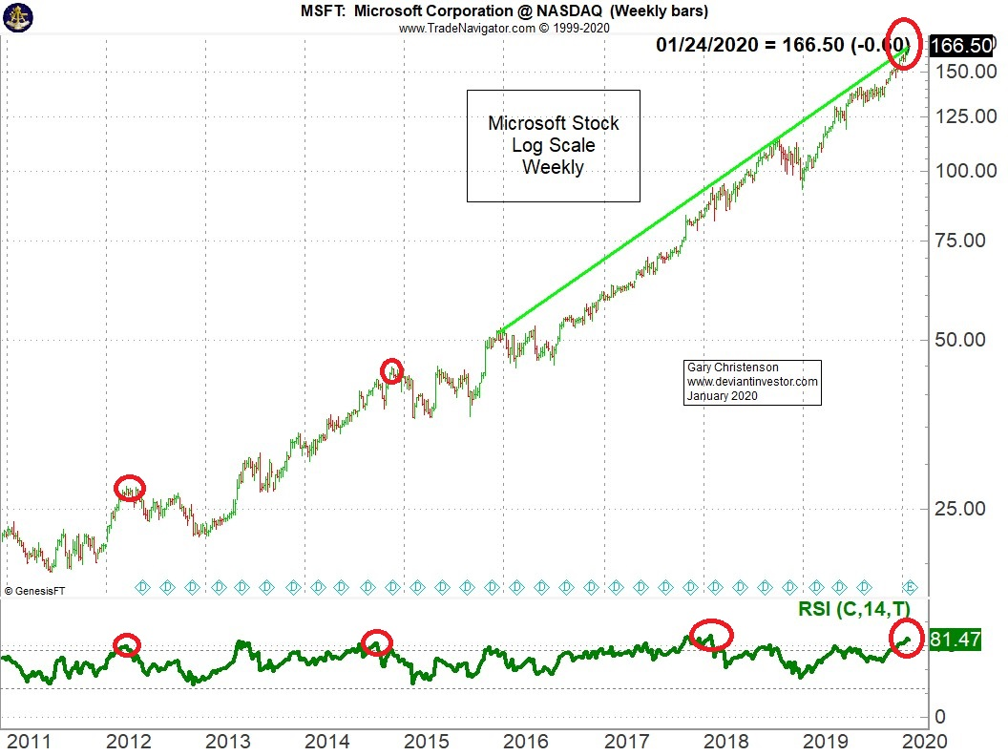 Daily charts (not shown) for both stocks also show over-bought conditions, as measured by the RSI.

The last time Apple’s combined RSI (daily + weekly + monthly) was this high was 12 years ago. It lost over 60% after that RSI peak.

The last time Microsoft’s combined RSI (daily + weekly + monthly) was this high was 23 years ago. It corrected and then climbed much higher, but it might not this time.

Both stocks are too high. Over-valued markets fall, bubbles always collapse, although timing is uncertain. What is the risk to reward ratio for over-valued stocks? Are they worth the risk of a huge downdraft?

However, some believe the Fed has their back, markets will rise forever, and QE will support over-valued markets. They must ignore the stock market crashes in 1987, 2000 and 2008. They must ignore many crashes in crude oil, sugar, silver, and gold. They must ignore crazy politics, monetary failures, costly wars, “adjusted” statistics from government agencies, and a shortage of truthful responses from politicians and central bankers.

Some people think stocks will rise much higher in 2020. Others disagree.

“Forget earnings, forget the economy, forget the trade deal, forget all of the stuff the media tells you to focus on. The markets care about one thing and one thing only: LIQUIDITY.”

[Possible, but is this a risk you want to accept?]

From Stewart Thompson of gracelandupdates.com

“Bonds can rally as a safe-haven when debt is not a major issue. When it is an issue, gold rallies while bonds languish. As the debt problem intensifies, bonds swoon, the dollar essentially incinerates, and gold skyrockets.”

From David Stockman at deepstateclassified.com:

“Yet cheaper debt and richer share prices are one of the most toxic consequences of monetary central planning. It provides powerful incentives to the CEOs and CFOs to borrow at sub-economic costs, use the proceeds to fund stock buybacks, increasing per-share earnings and expand multiples.” [with no benefit to the “Main-Street” economy…]

“These forms of financial engineering redistribute financial wealth to the top 10% and 1% of households…” [They own most of the stock market.]

“Current global debt levels are simply not sustainable. Debt actually is sustainable if the debt is used for projects with positive returns and if the economy supporting the debt is growing faster than the debt itself. But neither of those conditions applies today.”

“Global central banks know that to take their fingers off the monetary easy dead-man’s switch will destroy confidence. If they do extract the proverbial digit, then the all-out contagion consequences could make 2008 look like a slightly runny nose.”

“Through the creation of money, banks stealthy transfer wealth to those who control the money supply and those closely associated with it.”

Miles Franklin will recycle dollars from over-valued stocks into real money—gold and silver—with thousands of years of proven safety. Consider risk and reward.