Our base scenario for 2020 is that it might be a worse year for gold than 2019 was. However, there are three major upside (and one downside) risks for the gold market, which could materialize in 2020. Today’s article will introduce you to these potential catalysts that could send gold prices higher (or significantly lower) in 2020.

We stated earlier that unless something bad happens, 2020 may be worse for the yellow metal than 2019, as gold fundamentals seem to have deteriorated since the last year. Of course, bad things are happening all the time, but do not result in any possible negative developments. Rather, we have in mind three downside risks to our macroeconomic outlook, or three upside risks for gold. What are they?

First, economic crisis in China may break out, as the country’s level of borrowing has grown dramatically in the past decade and that pile of debt is a key source of vulnerability. In any Western country with market economy, such a debt problem would already have triggered a financial crisis.

And investors should remember that China’s local governments must pay-off over $283 billion in maturing municipal debt. Undoubtedly, they would like to rollover the maturing debt. But the problem is that it could push interest rates up, worsening the financial position of provinces and cities, which is already not in the greatest shape. In 2019, a few Chinese banks – China’s Baoshang Bank, Bank of Jinzhou, Heng Feng Bank – failed and were nationalized for the first time ever.

So, increasing credit defaults and corporate bankruptcies are now coming to the surface amid the economic slowdown. At the same time, China has to deal with protests in Hong Kong and tackle the trade dispute with the U.S. With all these problems happening simultaneously, there is a risk that something will get out of control. Any crisis in China would spill over to other markets, supporting safe-haven asset such as gold.

Second, risks are rising in the bond market. We mean here mainly high levels of risky corporate debt . The ultra-low interest rates encouraged excessive debt buildup. As one can see in the chart below, the credit granted to the all non-financial corporations from all sectors at market value as a percentage of GDP in both the U.S. and China is significantly above the pre-crisis level.

Chart 1: Credit granted to the all non-financial corporations from all sectors at market value as a percentage of GDP in the US (green line) and China (red line) from Q1 1952 to Q2 2019 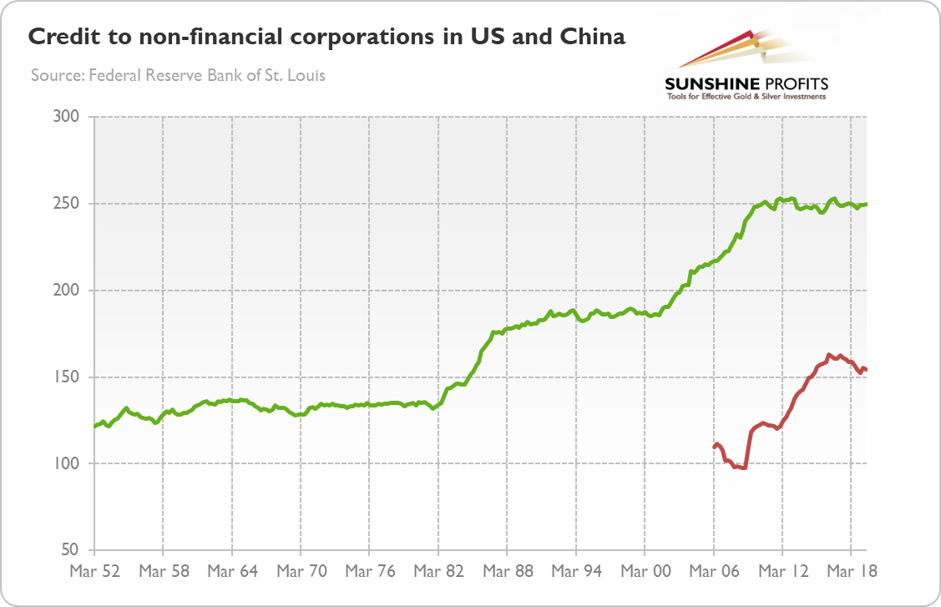 But American companies are already witnessing declining corporate profits and rising leverage, which makes some firms unable to cover their debt-servicing costs. The ultra-easy monetary policy also caused excessive risk-taking, or buying more risky bonds, to earn decent returns and maintain profitability. However, the quality of many bonds is debatable. So, any financial stress could complicate the debt refinancing. The IMF has recently warned that almost 40 percent, or around $19 trillion, of the corporate debt in major economies was at risk of default in the event of another global economic downturn.

Although worries refer mainly to risky corporate bonds, investors should not downplay risks related to the sovereign debt market. Around $17 trillion of sovereign debt is currently trading at negative yields. Such a situation is called by some analysts as a ‘mother of all bubbles’ and it is believed to likely trigger the next financial crisis in 2020 or 2021. Any bond market crash should be supportive for gold, which is the ultimate safe-haven.

Third, one of the most important events of 2020 is likely to be the U.S. election on November 3. And there is a risk that Elizabeth Warren or Bernie Sanders will win the Democratic nomination and ultimately the U.S. presidency. In general, the Democratic Party is heading left, so the Wall Street worries about radical policy propositions. In particular, Warren has a built-in hatred for financial institutions and wealthy people. If she wins and if Democrats gain a majority in the Senate, the corporate tax rate will be probably raised. So, we could see a fall in the U.S. stock market as soon as Warren or Sanders gets the nomination. When markets become nervous about American politics turning significantly left, some investors could park their money into gold, the hedge against stock market turmoil.

On the other hand, there are also some downside risks for the gold market. The biggest danger seems to be that the initial trade agreement between China and the U.S. will boost optimism (rightly or not) on Wall Street, which would support further rally in the stock market and make safe havens such as gold struggle.

Of course, we are aware that the trade wars have not ended yet and the reached phase one does not need to materially change the underlying dynamics in the global economy. However, the progress in talks indeed reduces somewhat the uncertainty which was holding back investments into risky assets and projects. It is indisputable that 2019 ended on a relatively positive note, especially when compared to 2018. So, there is a risk that the U.S trade deal with China turns out to be a game changer for global economy and the gold market in 2020.

Which scenario is more likely? Well, that’s good question. Our intuition is that after a short-term euphoria about the phase one trade deal, investors will be hit with the harsh reality of economic slowdown in China and other countries, debt saturation, and uncertainty about the outcomes of the U.S. elections. Hence, the second part of the year should be more positive for gold that the first one. Having said this, investors should not forget that historically speaking, January is one of the best months for the gold prices…