Much of the talk surrounding gold thus far in 2020 has focused upon geo-political and pandemic risks. While all of this is relevant to price in the short-term, the discussions being held by the Fed’s FOMC this week will have a much more durable impact.

At this point, I wouldn’t expect any change to the Fed Funds rate on Wednesday when the meeting concludes. The Fed just assured us last month that they had “found a stable rate” and that rates should remain unchanged in 2020. Rrrrright…until they lower them again. And this is coming, possibly as soon as the next meeting in March.

And why can we state this with such certainty? Because a barely-noticed trial balloon was floated by The Fed’s friends at the Wall Street Journal last weekend. And if you were busy following other headlines, you may have missed it.

You must understand this simple point: an article such as this one doesn’t appear out of nowhere. The author may have a fertile imagination, but he’s not just making stuff up. Instead, it is standard operating procedure for The Fed to leak plans such as this one in order to gauge sentiment and warn those listening as to what is coming.

We don’t have to look back far to find a recent example of this. Seemingly out of the blue last October 8, Chairman Powell announced that The Fed was considering a new “asset purchase plan that was not QE”. This caught everyone by surprise, because we’d been told for years that The Fed has actively managed a drawdown of their balance sheet.

And then, after floating this trial balloon on October 8, The Fed formally announced this plan on October 11. So we went from “no thought of QE” to “full-on QE” (regardless of nomenclature) in about 72 hours.

So back to present day and the story that magically appeared in the Wall Street Journal last Sunday. Again, history suggests that this was not done by accident, so you should expect some mention of this “rate cap” idea when Powell concludes the FOMC meeting and meets with the press corps on Wednesday.

And why is this important to gold?

Because a move to cap interest rates at artificially low levels is fundamentally and extraordinarily gold-positive. Not only does this institutionalize low/negative interest rates, it also creates an environment of increasingly negative “real” or inflation-adjusted rates. BOTH of these factors have combined to create demand for gold in all its forms whenever they have occurred in the past.

And the global bond market is already anticipating this move by the Fed. The total amount of global, negative-yielding debt just posted its largest one-week surge since 2016 and is now back above $13T for the first time since October. 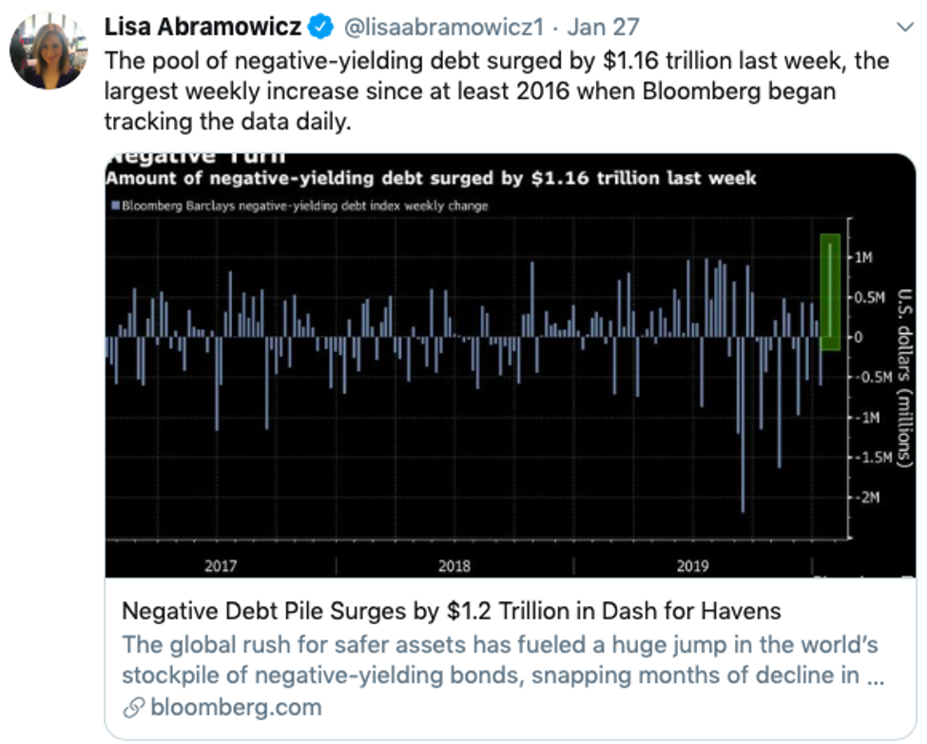 The U.S. bond market is suddenly surging, too, and why wouldn’t it? With the pending arrival of this “Powell Bond Put”, global investors can buy U.S. bonds with impunity, shielded from any potential losses through higher rates. Note that both the U.S. 2-year and 10-year notes are back to trading at the levels seen late last summer.

Which now brings us back to the Fed and the notion that while we are unlikely to see a fed funds rate cut on Wednesday, chances are high that we’ll get one in March. Why?

The current “effective” rate for fed funds is 1.65%. This places this overnight rate in excess of the 2-year note at 1.46% AND the 10-year note at 1.64%. The Fed DOES NOT like running an inverted yield curve, so as long as the bond market keeps rallying—and why wouldn’t it with Fed rate caps on the way?—only a fed funds rate cut to 1.40% will flatten and “un-invert” the curve in March.

If you understand these simple facts, then you’ll begin to understand why gold rallied in 2019 and why it will continue to rally in 2020. Yes, geo political and pandemic risks have had an impact on a daily basis, but the LONG-TERM trend is being driven by loose central bank policies, currency devaluation, and extraordinarily low-stated and inflation-adjusted interest rates.

And as long as these policies remain in place, expect gold to trend higher.

Specializing in the sale of bullion, bullion storage and precious metals registered investments, there’s a reason Sprott Money is called “The Most Trusted Name in Precious Metals”.

Since 2008, our customers have trusted us to provide guidance, education, and superior customer service as we help build their holdings in precious metals—no matter the size of the portfolio. Chairman, Eric Sprott, and President, Larisa Sprott, are proud to head up one of the most well-known and reputable precious metal firms in North America. Learn more about Sprott Money.

One thought on “Ahead Of The January FOMC”