This is probably the most important article I have penned. It is about the destiny of three individuals who all followed different tides. We are today at the point when the consequences of taking the wrong tide will be ruinous whilst the right one will be extremely propitious.

I have quoted Brutus’ speech in Shakespeare’s Julius Caesar many times in the last twenty years. But I believe that it is today more relevant than at any time in history, when it comes to economic affairs.

There is a tide in the affairs of men.
Which, taken at the flood, leads on to fortune;
Omitted, all the voyage of their life
Is bound in shallows and in miseries.
On such a full sea are we now afloat,
And we must take the current when it serves,
Or lose our ventures.

The moral of the story will be obvious. The outcomes are so vastly different that anyone who reads about the three human destinies below will easily sympathise with the one who took the tide that “leads to fortune” rather than the two who ended up “in miseries.”

But here is the crunch of the story. Although virtually all investors reading this article will see the obvious choice, I am convinced that 99% of all investors will make the wrong investment decision in the next few years and end up in miseries.

So let’s look at the three different individuals who followed different currents.

CHARLES, LOTTE & ALFRED – ONE WISE, ONE UNLUCKY AND ONE GREEDY

The first and true story is about Charles Dupont, a Frenchman who in 1920 at the age of 20 inherited 1 million French francs and how he successfully invested his inheritance.

The second and also true story is about Lotte Hendlich, a German widow in her 50s who left Germany in 1919 and came back in 1923 to a financial nightmare.

(The Charles and Lotte stories are from the voluntarist.com)

The third one is about Alfred who received his first shares when he was born in 1945 and continued to invest in the stock market until today. The Alfred story was written by myself and is fictitious. But it could easily be a true story since it is very typical for many investors in the last 75 years. (LINK Alfred article)

Charles Dupont was born in Paris in 1900. When he was 20, he inherited the important sum of 1 million French francs. He received advice from an extremely wise man who told him to buy gold. So Charles bought 50,000 gold Napoleon coins worth 20 francs each. The weight was 6.45 grammes or 1/5th of an ounce. At the time, these coins were legal tender in France. From the time of his purchase in January 1920, Charles spent one gold coin per day for all his living expenses until he died in 1980. Charles was not married and lived a frugal life. 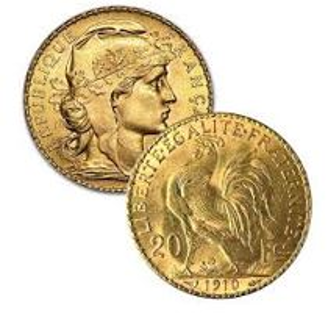 Charles had a few visits from the tax authorities since he never paid any tax. The tax inspector could never understand what he lived on since he had no declared income and no bank account and thus no payments in or out. But as the taxman couldn’t find anything, he took no action.

After Charles’ death in 1980, his nephew moved into the apartment. The nephew found Charles’ diary in which he wrote that he could live simply but well on his one gold coin per day. Charles also described the war and the black market. In those hard times the 20 franc gold piece went up in value as it did during currency manipulations.

In 1988 Charles’ nephew found two heavy chests in the attic that belonged to his uncle. In these chests he found 28,100 Napoleon gold coins. For a modern man, these coins served no purpose so Charles’ nephew sold every single coin. He received the incredible sum of 13.9 million French francs.

On her return, she found three letters from her German bank. The first one, written in 1920, was from a bank employee suggesting that she should put her substantial sum of 600,000 marks in US dollars instead. The bank employee explained: “It is my judgement that the purchasing power of the mark will decline and I suggest that you guard against this through some suitable investment which we can discuss when you come into the bank.”

Lotte found a second letter from the bank in her pile, written in September 1922. It was written by another bank officer who said: “It is no longer profitable for us to service such a small account. Please withdraw your funds at the earliest opportunity.”

The third bank letter Lotte had received in her absence was dated a few weeks before she returned in September 1923. The letter stated: “Not having heard from you since our last communication, we have closed your account. Since we no longer have any small denomination notes, we enclose a note for one million marks.”

Lotte was obviously shocked. Receiving 1 million marks in return when your deposit in 1920 was 700,000 seems a generous gesture by the bank. But the stamp on the letter was also one million marks and Lotte understood that all her considerable fortune had been destroyed by hyperinflation and she had no money left.

Below the dire consequences of hyperinflation:

(Billionen in German is Trillion in English)

When Alfred was born at the end of WWII he was fortunate to receive $100 of stocks from his grandparents. His parents and grandparents continued to buy $10 of stocks every month for him.

Alfred started working in his early 20’s. He had a good income and continued to save an important part of his earnings in stocks every month until he retired in 2010. With his family’s savings and his own, Alfred had put a total of $1 million in stocks. With the help of a rising stock market, Alfred’s $1 million savings have grown to $16 million today. In 1945 when he started, the Dow was 150 and today it is 28,250, a 188x increase. 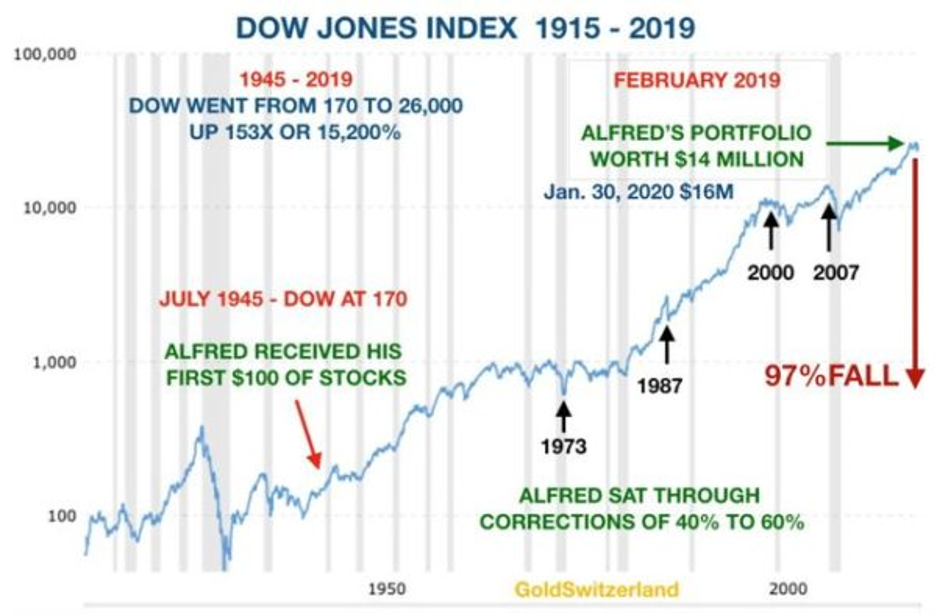 What is more remarkable about Alfred is that he never tried to time the market. He bought Dow Stocks every month and never sold. He never analysed the market or tried to time it. Nor did he study any of the shares he bought. Why should he since he was never going to sell anyway.

So Alfred has until now been a genius and beaten over 99% of all experts by just buying the Dow index and never selling.

As opposed to the other two true stories, Alfred’s story hasn’t finished yet and today February 5th 2020, the market is near its all time high. So it is looking good for Alfred.

GOLD HAS VASTLY OUTPERFORMED STOCKS IN THIS CENTURY 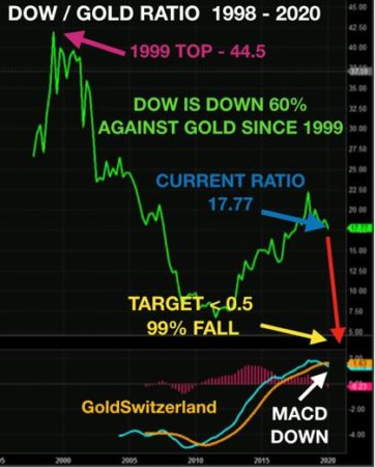 The Dow/Gold ratio was 1 to 1 in 1980. The long term target is now below 0.5 to 1. That means a 99% fall from here. The trending quarterly MACD indicator has turned for the first time in 9 years – an ominous sign.

Very few investors are aware that gold has vastly outperformed stocks in this century (even if dividends are included). No investment managers buy gold. They don’t understand gold and they don’t like it since they can’t churn commissions by buying and holding physical gold for the clients. MSM virtually never writes about gold and when they do it is derogatory and written with total ignorance.

The Alfred story is not finished yet since the Dow is near the top and Alfred currently is a hero and a very rich man with 75 years of investment success. But it is likely to end in tears.

So let us look at our three investors and draw some conclusions:

ALFRED WILL LOSE IT ALL

Firstly Alfred has had a very successful investment record for the last 75 years but I am afraid that he will lose it all in the next five years or so. If my forecast is correct in the graph above, and I am convinced it will be, then Alfred will end up a very poor man since the Dow is likely to decline by 99% in real terms, which is against gold.

So 75 years of savings all put into stocks will just evaporate in the coming five years. Hard to believe for most investors who thought they were experts in buying stocks. Little did they understand that credit expansion and money printing created unsustainable bubbles that had to burst one day.

CHARLES – THE WISEST OF THE THREE

Charles who put all his money into gold was a simple man who did not want to lose his big inheritance. He lived a comfortable life and had more wealth left when he died than when he started as his gold continued to appreciate. Sadly his nephew didn’t understand the wisdom of wealth preservation and turned it all into paper money.

But it is Lotte who experienced the biggest disaster. She started with a substantial amount of money but due to bad luck and some poor money management, she lost it all during the Weimar hyperinflation.

So is there a moral in these three destinies that we can learn from?

Well, since Alfred’s story is not totally written yet, I can hear some optimistic stock market investors arguing that he will be the winner with his big return to date. Time will obviously tell but I will stick to my forecast that he will lose it all. Because Alfred will never get out just as he hasn’t in all the previous corrections. And that will be typical for almost all stock investors. They will first buy the dips and when that doesn’t work, they will hang on to their stocks until they are worthless.

Investment markets are a wonderful leveller. You can look like a genius for a long time (or 75 years as with Alfred) and then lose it all. As Richard Russell said, “In a secular bear market everyone is a loser.”

So Lotte lost because she had all cash during a hyperinflationary period. And Alfred will lose it all in the biggest market crash in history. But Charles kept it all because he had gold. He wasn’t an investment genius but just a cautious man and listened to the wise man who told him to buy gold.

MORAL OF THE STORY

The moral of the story is that over time you cannot go wrong with gold. It might not be a very exciting investment but that is of course the whole purpose. Over thousands of years gold hasn’t gone up in real terms. All gold has done is to maintain purchasing power. And when governments constantly destroy the value of paper money, you can lose it all like Lotte or keep it all like Charles.

HISTORY IS YOUR BEST TEACHER

No sadly, the majority of people don’t learn, because they all believe that it is different today. History could be a great teacher but sadly few people read or understand history.

For the few people who grasp that risk today is greater than anytime in history, they also understand that physical gold is the ultimate form of wealth preservation. Lotte didn’t see it, Alfred won’t realise it until it is too late. But Charles experienced that during depressions, wars and currency devaluations gold maintained its purchasing power and gave him a financially secure life.

The choice is easy but sadly only a very few will take the tide that leads to fortune.