One of the advantages of being a sexagenarian is that after forty years investing in stocks, bonds, commodities, and currencies you have a pretty good idea when something is not exactly “right.” If you have lived a good, normal life and you still have decent control of over your mental faculties and bodily functions, you remember moments in time that impacted your sensibilities, not unlike your first crush on a girl, or that final exam, or an authoritarian coach’s dressing-down.

However, given my chosen profession, nothing gets more indelibly etched into one’s psyche than a big price “move” in something one owns. Be it a loss or a win, one can recall all the inputs that created that “move” and, sometimes elatedly and sometimes sadly, one can recall all of the ramifications and repercussion from the “move.” You will, later in life, regale in the joy (or sorrow) of recounting the story of the “move” until people roll their eyes in angst upon being subjected to their ninth or tenth serving. 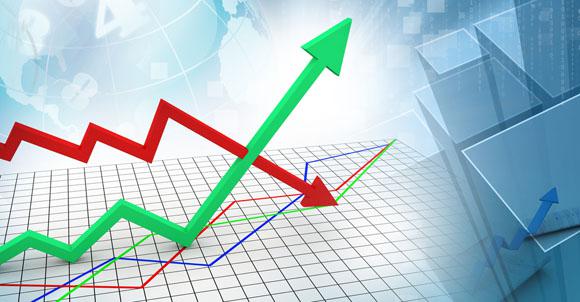 Of course, one of the disadvantages of being a sexagenarian is that over time, one forgets (or imbues) portions of the story, usually in favor of its historical significance or personal accolade. But, alas, that is an anecdote for another day. What I wish to discuss with you all today is that my geriatric power of recall and my olfactory rot-sensor are telling me that something is definitely not “right.”

This pervasive feeling of dread originates from this perversion known as “the stock market.” where our banker-politico alliance has conspired to distort its historical role as a barometer for the economy and instead use it as a tool for manipulating consumer (and voter) behavior.

The practice of using the Working Group on Capital Markets to alleviate concern in the minds of iPhone-buying citizens through the constant and criminal levitation of stock prices (as shown above in the “All is well!” chart), and the capping of gold prices, has now made the barometric role of natural price discovery a thing of the past, a distant memory, a figment of sexagenarian imagination. That young investors can boldly go where no man has gone before in terms of risk discounting (or risk ignorance) is a moral hazard of utmost consequence and danger.

It is said that copper has a PhD in economics, and since it is such a gargantuan global market, it is essentially immune from the whims of the banker-politico lever-pullers. As such, it has been screaming “Danger!” for most of this very young 2020. This swoon in the world’s #1 industrial metal is comparable to the crashes in 2001 and 2008, and similar recessionary periods such as 1980–82 and 1973–1974, and warns of a rapidly slowing global trend.

Actually, copper has been moving straight south since mid-2018, but there hasn’t been as much as a peep from the hallowed halls of the Wall Street Journal or the sacred studios of CNBC, because to do so would oppose the national narrative. To wit, it is this national narrative that really gets on my wick because my training from the pre-2000 period of financial sanity has me constantly on the lookout for things that just aren’t “right.” To have young people diving into overinflated stock funds (and housing) because global growth is “healthy” is somewhat warped and totally bereft of logic.

We can look at charts of the Fed balance sheet, or national debt, or China’s purchasing manager indexes (PMIs) and all arrive at various (bullish) conclusions of all shapes and sizes. But there is one chart in all of the financial universe that tells me what the smartest people in the world are doing with their “big wallets,” and that is the chart of long-term bond yields. If copper has a PhD in economics, then bond yields would be the academic masters that wrote the books copper studied en route to its degree.

Long-term yields are different than short-term yields because the former are demand-driven while the latter are policy-driven or “administered.” The Federal Reserve maestros can play Pac-Man with short-term interest rates, but they can’t with long-term yields because over the long term, yields will move to levels governed by fear. And it is fear and fear alone that drives the risk-free rate of return for holders of all the wealth in the world.

Accordingly, it is this next chart whose eardrum-splitting air raid siren is drowning out the blips and beeps of the copper chart or the ding-dong of the stock chart without a trace of indecision or reflection. Long-term yields are moving lower and they are moving lower fast. That, my friends, reeks of a sense of urgency verging on panic, and it began long before the coronavirus arrived.

The chart below is truly “The Great Dichotomy.”

It is this Great Dichotomy that terrifies me, and the one chart that should be required reading for everyone participating in the world of financial speculation—and a rote memory prerequisite for the all serious investors.

To put this in perspective, you are afflicted with a certain medical condition and there are ten people in a room all telling you what medicine to take. You can heed the younger guy with the tattoos and the leather chains smoking a reefer, or you can listen to the older, quite hale gentleman in the white coat and glasses. One is telling you that you are fine while the other says you need some rest. One is telling you that “All is well!” while the other is telling you to go directly to the emergency ward. Failure to respect dichotomies such as this can lead one to disaster and financial ruin.

If it was only copper, or only elevated relative strength index (RSI) readings, or only a global pandemic, one could a write it off as “a buying opportunity,” and take the tack of patience and calm, moving forward into battle with a stiff upper lip and stoic resolve. This, however, is not a one-off “event-risk” situation that will eventually fade, leaving the dance floor wide open for above-average capital gains and central planner-entitled prosperity. Long-term yields do not lie. You can discount virtually everything else in the universe of chart-ology, but you dare not doubt that one simple dichotomy shown above.

Now, last week was a the second-most blatant case of intervention by the banker-politico alliance, exceeded only by the 2008 bank bailout and stock levitation, and slightly ahead of the Christmas 2018 activation of Smilin’ Stevie Mnuchin’s Plunge Protection Team (PPT) campaign. With stocks breaking down on the eve of the impeachment vote and on the crest of the coronavirus wave, China set the table with trillions of USD-equivalent yuan liquidity jolts in order to prevent a microbe-triggered meltdown in its capital markets, matched majestically by similar actions from its U.S. counterparts. The result was a near-magical, one-week levitation of 2.46%, the biggest advance of this duration and amplitude in two-odd years. Praise the Lord! 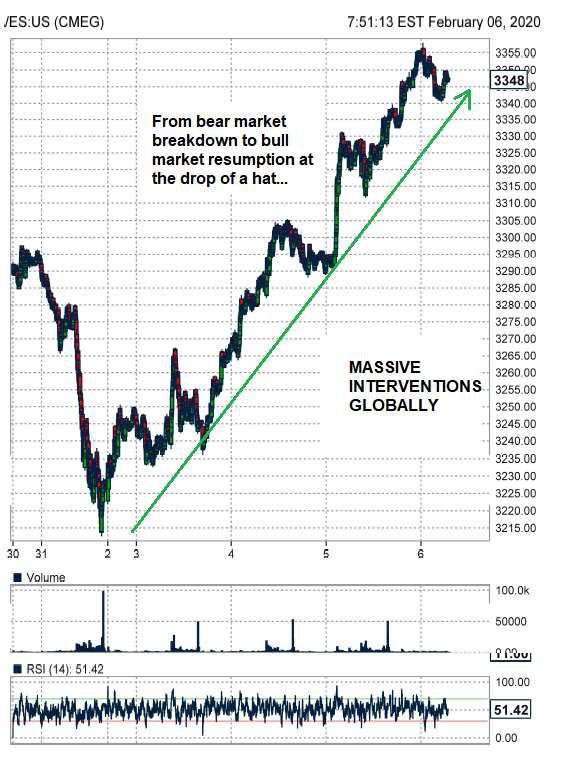 When I look at a chart such as this, I am inclined to default to a well-honed suspicion, and in order to decipher the true meaning of such an advance, I turn to gold and fully expect that these collusive cretins would have engineered a countertrend takedown of equal magnitude. But while gold lost some $20 on the week, it was a mere pittance given the extent of the rescue mission in stocks. No uptrend line was broken; few negative divergences came about; and the bull market emerged from yet another week of pandemonium intact, albeit on a late downtick.

Silver fared not as well. It suffered its fourth down week in five for the year, but remains in the uptrend that started last May. If that “slingshot effect” I wrote of earlier is to pass, silver needs to get the lead out of its jeans, and quickly. The gold:silver ratio (GSR) is hovering just under 90 (88.80), and please forgive the redundancy, but a rising GSR is not characteristic of a healthy bull market.

Similarly, the action in the gold miners early in the week gave me the opportunity to replace

50% of the GDX and GDXJ positions at or under their respective 50-day moving averages (dma) and then top up the rest on Friday. However, the HUI has also struggled since 2020 arrived and, like silver, suffered its fourth down week in five. More ominously, unlike gold and silver, the HUI has broken below the uptrend line drawn off the May 2019lows, and this is not good. We absolutely must reclaim that uptrend line—and hopefully this week—to avoid any further divergences and potential nonconfirmations.

Keep in proper perspective that considering the raging advance in the NASDAQ this week, led by the epic short squeeze in Tesla (and move to over $960), gold miners did relatively well despite a weak silver market and a near-300 point drop in the Dow.

More than a few subscribers and followers have been asking about the junior developer/explorer portion of the GGM Advisory portfolio, and while Aftermath Silver Ltd. (AAG:TSX.V) was the superstar in 2019, it has been in correction mode recently, with both Goldcliff Resource Corp. (GCN:TSX.V; GCFFF:OTCBB) (now drilling Nevada Rand) and Getchell Gold Corp. (GTCH:CSE) (preparing to drill Fondaway) outperforming. I put out a note to subscribers on Thursday on Aftermath that I am now happy to share, so e-mail me at miningjunkie2016@outlook.com and I’ll be pleased to pass it along. I smell an upside advance on the immediate horizon and my note (hopefully) spells it out in large block letters.

Heed the Great Dichotomy. It is an insidious omen for all but those things “precious.”