Powell says Fed will aggressively use QE to fight next recession

Federal Reserve Chairman Jerome Powell said Wednesday the central bank would fight the next economic downturn by buying large amounts of government debt to drive down long-term interest rates, a strategy that has been dubbed quantitative easing, or QE.

Of course they will. The fix is always in, isn’t it? Wouldn’t want to let a system and associated economy so far out on a brittle limb weighed down by exponential debt leverage go it on its own, now would we? Wouldn’t want anything like a naturally functioning economy because until an utter and complete crash and clean out, there can be no such thing. So more debt manipulation it is!

“We will use those tools — I believe we will use them aggressively should the need arise to do so,” Powell said.

The Fed has traditionally been able to slash interest rates to fight a recession often by as much as 5 percentage points. But that’s impossible now because the Fed’s benchmark rate is currently in a range of 1.5%-1.75%.

“We will have less room to cut,” Powell said.

Now comes the money line (no pun intended, because we are not talking money here, we are talking munny… really FUNNY munny)…

As a result, once the Fed trims rates close to zero, if it does, “it is much more likely we will have to turn to the tools we used in the financial crisis,” namely asset purchases and forward guidance, Powell said.

He’s just playing the hand he was dealt, even as he contemplates playing Bernanke’s 2008 hand. Can you imagine this talk coming today with the stock market doing this? At least Bernanke had an obvious systemic, err, issue staring him (and the public) right in the face. Today? We’re talking about using exotic “tools” with the S&P 500 about a million points higher. This is not even in the same galaxy as normal. 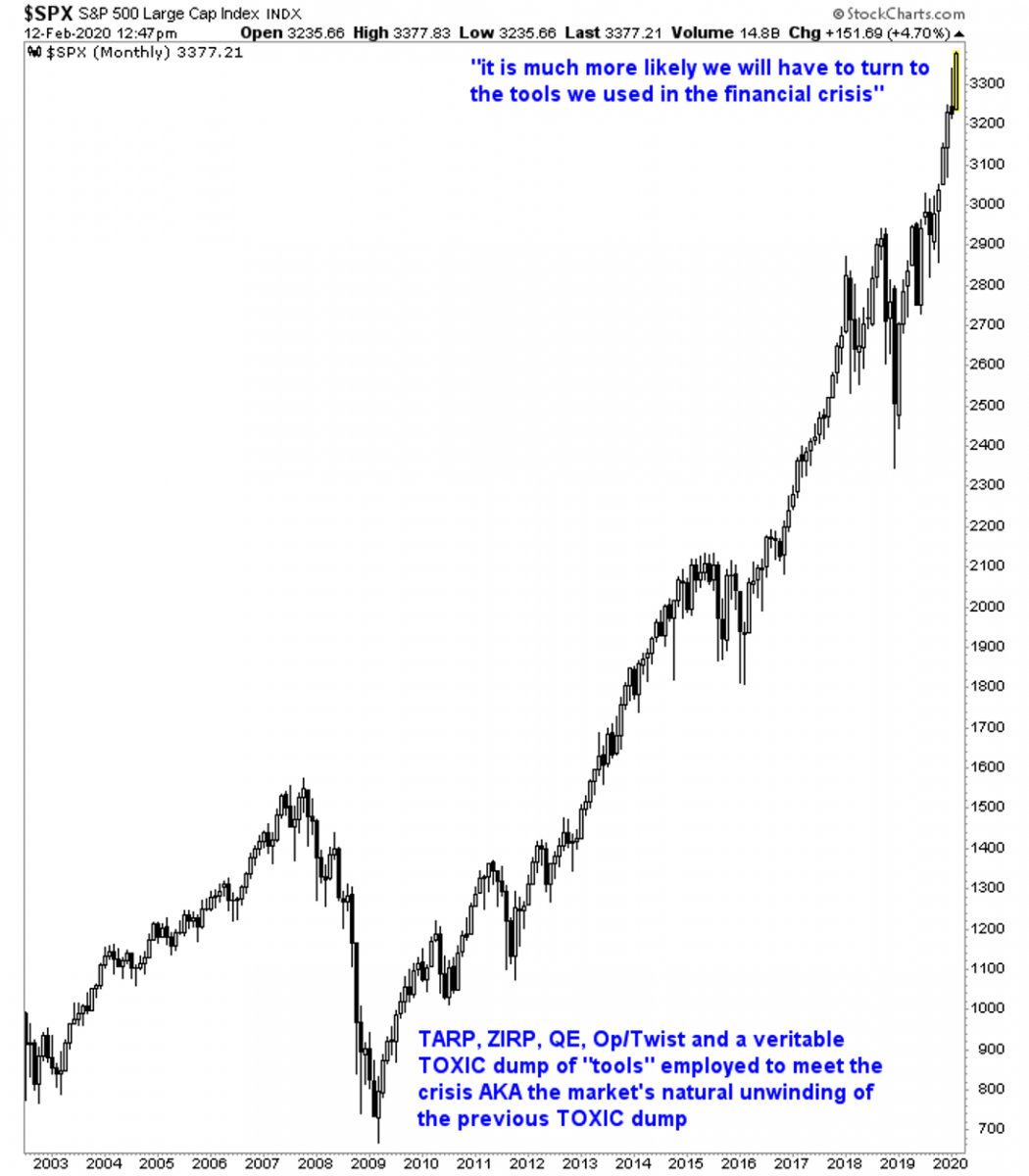 Listen, I am not a bear grousing. My job is to interpret as best I can what is going on out there. As such, NFTRH has tactically been on the right side of this market, including the most recent phase from the Christmas Eve 2018 low right on through to today. We’ve not been fooled. We’ve done the work to stay right with it.

But that does not mean it is right. I believe it (the manipulation of signals that is going to one day put untold millions way off sides and in grave financial danger) is very wrong because it is unnatural. Today this manipulation – and need for ever more of it – is codified in the words of the Fed Chairman and his fellows around the world, as they auto-inflate at every little twitch in the global economy.

Why? Because when the debt edifice does unwind, nothing is going to stop it.