The manufacturing recession that everyone acknowledges as having begun last summer continues: 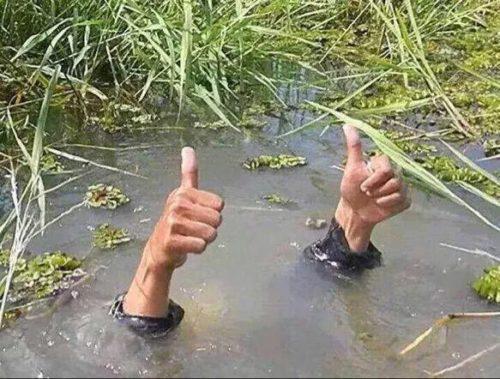 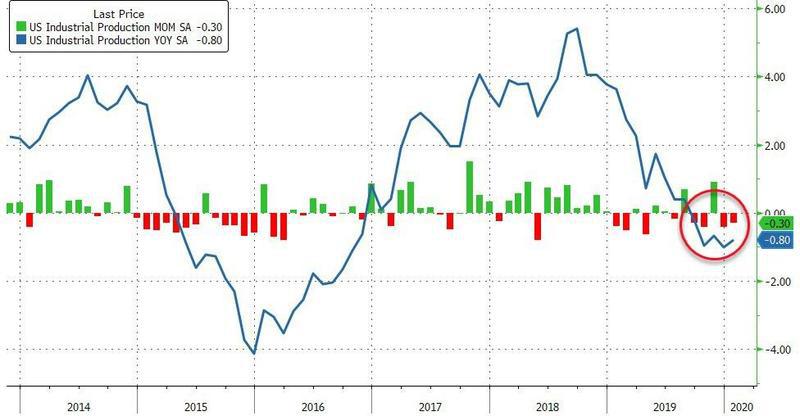 Four of the last five months have been downward moves, and even the one upward move didn’t take us back above the recessionary line. That is almost half a year in an industrial recession with no reprieve. By other measures, it only looks longer and deeper: 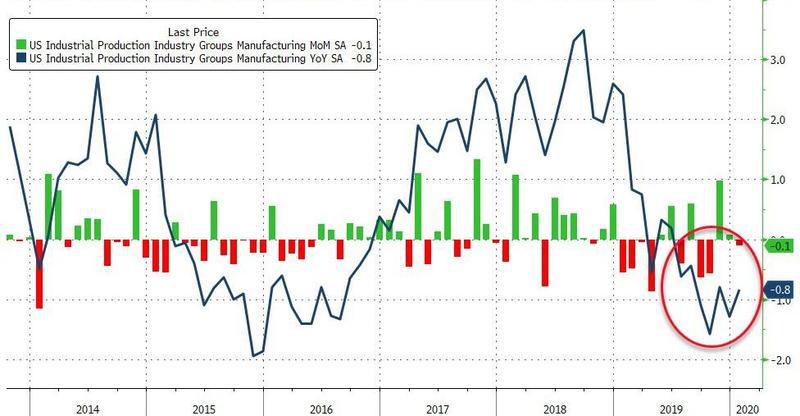 This is the worst industrial production has been since Obama was in office. And this is before “coronavirus” became a household word. Of course, it could be worse still; we could be Germany.

It depends, of course, on who you go by. The ISM version of US manufacturing PMI from Moody’s Analytics has finally returned to the barely positive side of the recessionary line of demarcation: 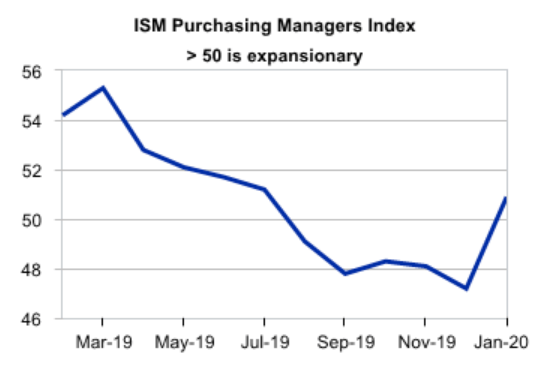 However, something worse just happened. The services sector of the USS economy — the long hold out from recession — just fell off a cliff into recessionary territory: 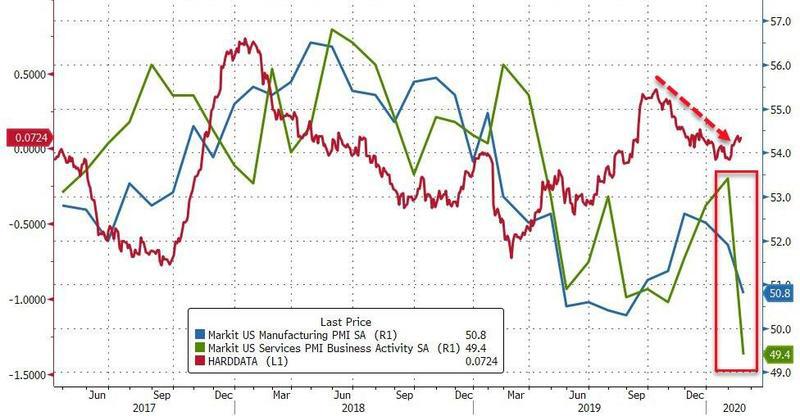 Partially as a result of the manufacturing recession, corporate profits have been flatlining since the Trump Tax Cuts began:

Calculated AFTER taxes, corporate profits got one initial bump from their tax savings when those savings kicked in, and have been flat ever since. Take out the adjustments that are included in the above graph, and they are negative. Fact is, there is all kinds of room for juggling in those adjustments to make things look as good as possible. As good as possible, then, is zero growth for two years.

2019 was, in fact, the fifth consecutive year with no operating profit growth (meaning growth from actual business that excludes any bottom-line rise in “earnings” that comes purely as a result of paying out less in taxes).

Shown as percentage growth (or decline) before taxes, that looks like this:

As you can see below, corporate tax cuts certainly did not increase corporate revenues enough to keep government revenue from falling: 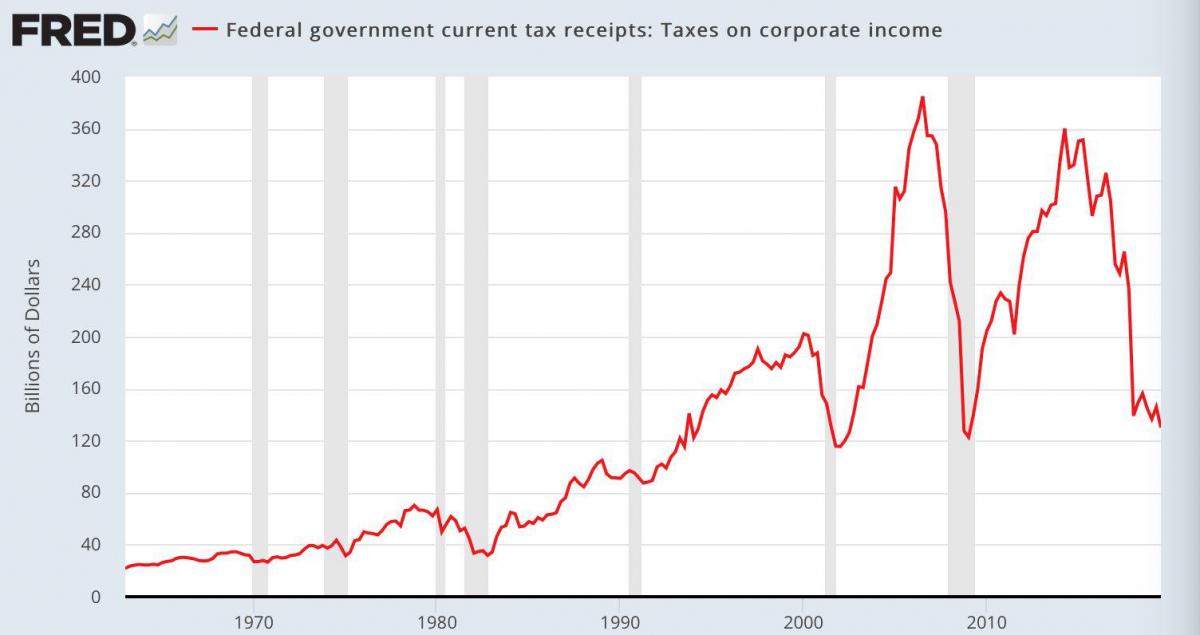 And, while everyone talks about Europe sliding into a recession, you can see that the US actually has a far higher percentage of its companies operating year-after-year at a loss than either Europe or Japan:

It’s not surprising, then, that the Cass Freight Index (truck, rail, barge, and air) that I’ve been tracking in overviews similar to this one, got decidedly worse since the last time I posted a graph (worse from an already bad position): 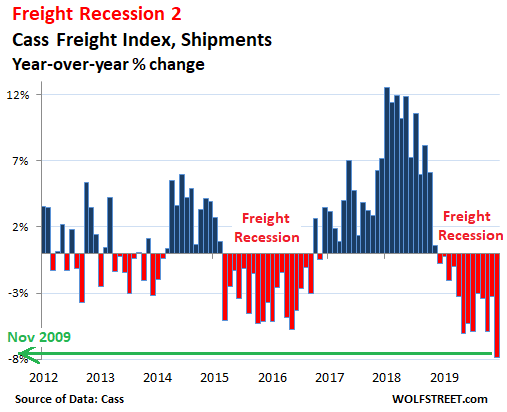 There we are — again having to go all the way back to the Great Recession to find numbers as dismal.

Carmageddon is still leaving the auto industry as the worst-hit segment of manufacturing (and one of the largest segments). While profitless Tesla stocks climb like Icarus toward the sun, the rest of the automobile industry has been writhing in a recession called “Carmageddon” for more than a year.

For nearly 18 months we have been keeping a close eye on the recession occurring globally in the auto industry, most recently highlighting both a collapse in Chinese sales for January 2020 and the continued impact that the coronavirus outbreak is having on an already decimated industry.

This auto-immune disease has spread throughout the US, Europe and now through Asia. After posting its first quarterly net loss in a decade even Nissan just slashed its outlook for operating profits in 2020 by a whopping 43% due to further falling auto sales. Last quarter alone, it’s global sales fell 11%. (US sales down 18%.)

No wonder the desperate company has shot two CEOs out the tailpipe since September and is now misfiring on its third. Recessionary burnout runs hotter than the car market. Along with its exhausted CEOs, the company plans to blow out 4,300 white-collar workers and permanently shut down two plants. (And it is not as though things are any better for US auto manufacturers.)

To make matters worse for the automaker, heavy-vehicle says fell off a cliff, catching down (in terms of their trend) to the long, gradual decline in sales of cars, SUVs and pickups:

The Retail Apocalypse continues apace. Macy’s announced this month it is firing another 2,000 employees as it shutters 125 stores.

The housing market is not out of the woods yet either. You can see how the turn of the market in sales back in the summer of 2018 rapidly reduced price growth, to eventually flatline and then finally go negative (recessionary). Prices finally nudged up a little in the last month of the year, but not enough to recover their slight loss. (Prices, as I’ve noted take a long time to catch down to falling sales.) 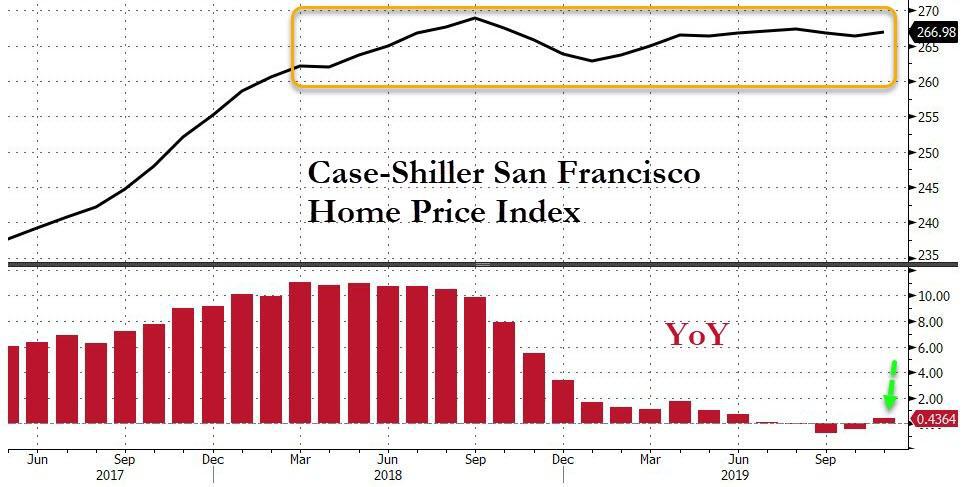 Demand for commercial industrial bank loans has been falling for almost half a decade, and is now touching on a 20% decrease: 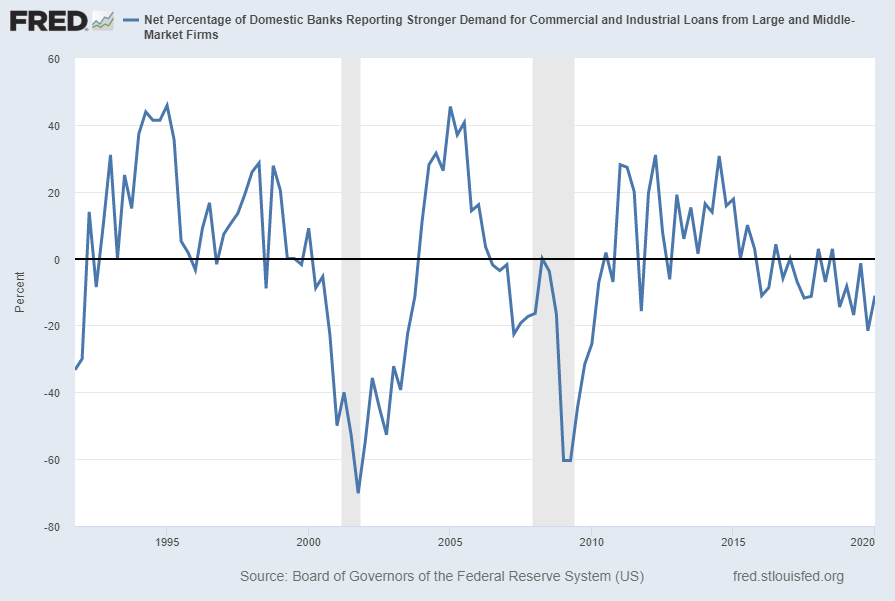 US leading economic indicators appear to have put in a definite top with a worse-than-expected 0.3% MoM drop in the Conference Board’s index: 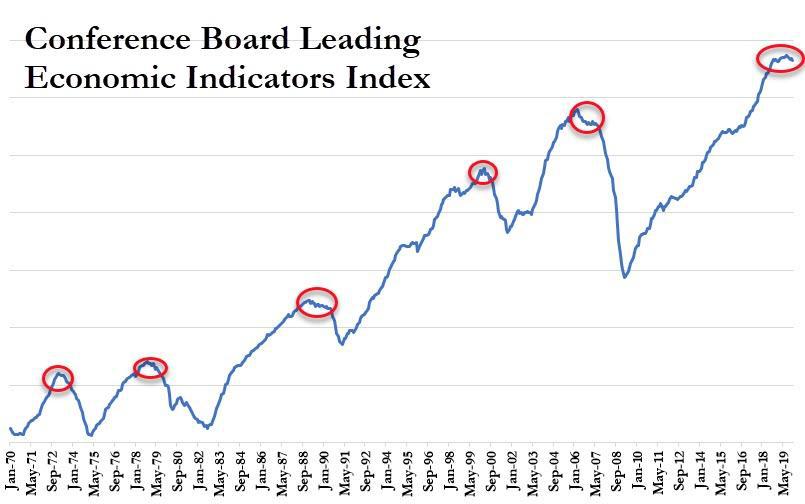 Another even broader measure of economic activity is doing worse.

Despite soaring stock prices, exuberant talking heads, and ebullient politicians (on the right), The Chicago Fed’s National Activity Index crashed from +0.41 to -0.35 in November (drastically worse than the +0.13 expectation). Twenty-seven indicators improved from November to December, while 56 indicators deteriorated and two were unchanged. 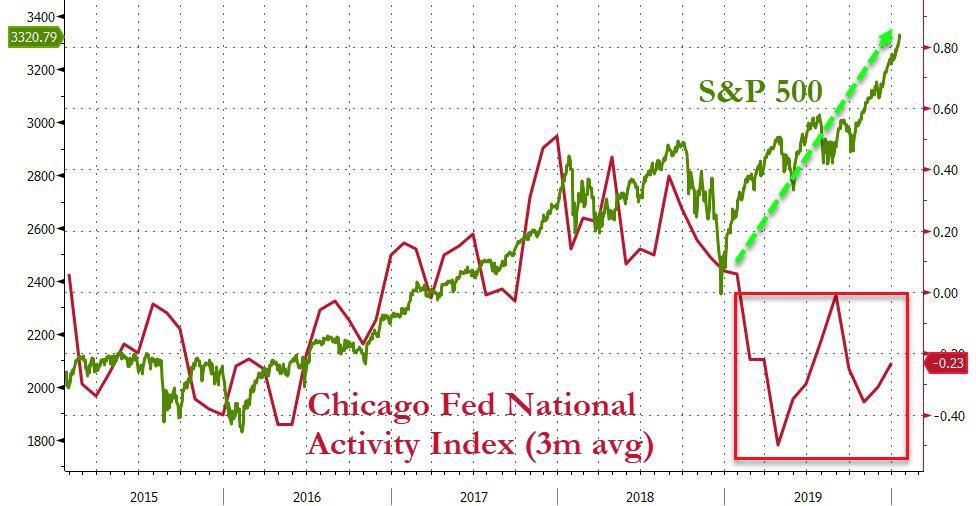 It’s recession everywhere … or is it depression:

The head of the International Monetary Fund has warned that the global economy risks a return of the Great Depression, driven by inequality and financial sector instability…. “In some ways, this troubling trend is reminiscent of the early part of the 20th century – when the twin forces of technology and integration led to the first gilded age, the roaring 20s, and, ultimately, financial disaster….”

Eric LeCompte, the head of debt charity Jubilee USA, said: “The IMF delivered a stark message about the potential for another massive financial disaster that we last experienced during the Great Depression.

Most financial experts have been reluctant to see recession coming, and that is not surprising since almost none of them saw the greatest recession in nearly a hundred years coming until well after it was already here. So, typically, we’ve read things like “the risk of recession in the next two years is about 20%.” Now some are stepping up to the plate late in the game:

A respected U.S. central bank official and a team of economic strategists have warned that the nation is flirting with the brink of a recession. UBS Global Macro estimates a nearly one-in-three chance of a recession.

The UBS model places that risk within the next few quarters.

Employment has been the big holdout to my recessionary predictions as I’ve pointed out for months, but not so much anymore. Job openings have fallen precipitously, and new hires are flat. 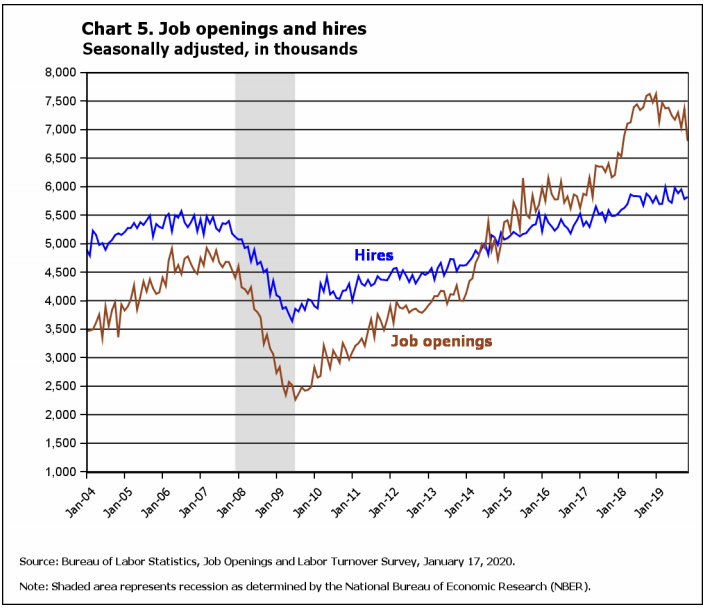 There is so much to say about the baloney in labor statistics that I wrote a separate article about it this month. If you haven’t read it and want the deeper scoop, you can find it here: