The Federal Reserve on Tuesday gave the market a double-dose of exactly what it thought the market needed, and the market just about died! On the theory that, if a little is good, more is better, the Fed gave a double cut of interest. It did not go as planned.

At first, the medicine hit like nitroglycerin tablets, and the patient’s heart leaped. You can see how instantly the patient bolted up on the operating table in the graph, but the double dose the Fed administered was too much, and by the end of the day the patient’s vital signs were down 785 points.

Simultaneously, bond yields busted through a major psychological barrier with the 10-year yield going deep into a coma below the 1% near-death zone to rest at 0.97%! 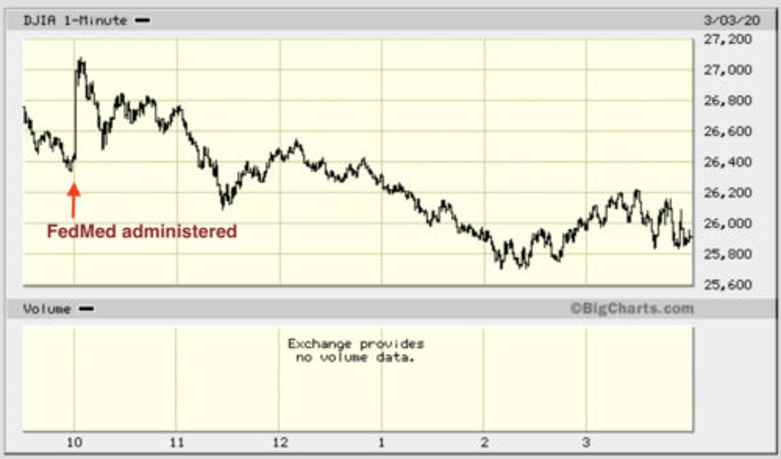 “Why?” the onlookers in the gallery overlooking patient and doctors asked. “Why? This was exactly what the market wanted.”

Why the medication caused an allergic reaction

The stock market tumbled Tuesday, with investors apparently rattled rather than comforted by the Federal Reserve’s decision to deliver a rare, emergency rate cut aimed at shielding the economy from disruptions caused by the global spread of COVID-19….

While an interest-rate cut was good for a knee-jerk positive reaction in equity indexes, gains soon faded as the initial euphoria gave way to questions about just how worried policy makers must be to prompt such a rare move. It signals to investors “that policy makers are grasping significant uncertainty and rapidly mounting downside risks,” said Lara Rhame, chief U.S. economist at FS Investments, in an interview.

It was the “wrong medicine,” MarketWatch went on to say. It was wrong for exactly the reason I’ve said it would be wrong when tried, noting that it almost certainly would be tried. It was tried faster than most people, including me, thought.

It was wrong because you cannot treat a supply-side recession with an interest cut. The market apparently realized what I wrote just last week”

Odd how we need so much medical support (ahem, “insurance”) from the Fed’s nearly expired cabinet of medicines at a time when the Fed and the president have just told us (quite resoundingly in fact), “The economy is strong!” (Of course, the Fed can cut rates down to the bone, but that isn’t going to restore supply chains or quell viral fears. Viruses are not responsive to interest-rate cuts in the stream of imaginary money.)

“The Great Melt-up Melt Down“

This recession is now morphing into a supply-side recession. That is especially bad news because it means business is no longer just falling due to diminished demand, coronavirus is causing business to fall because of diminished labor and supplies. In China, goods are not getting manufactured or shipped because people aren’t going to work. In other countries, goods are not getting manufactured because manufacturers cannot get their essential components out of China…. The Fed has no impact on the economy in a supply-side recession.

Apparently, once the market got what it thought it wanted, it started to realize, “This isn’t going to work.” You cannot get workers to go back to the factories by enticing them with interest-rate cuts on their mortgage or credit cards. You cannot get factories to go back to producing parts in China by creating interest cuts in America. You cannot get factories anywhere to go back to work with interest cuts if labor is quarantined and cannot travel or if laborers are afraid to assemble with other people. Interest cuts won’t get ships to go into ports to pick up parts or products and move them. Low interest won’t get tourists to go to places where they fear disease or travel in cruise ships that we saw become leper colonies at sea or cluster in airplanes where they are as trapped as on ships.

Already Airlines are in big trouble:

The coronavirus epidemic rippling around the world is … grounding hundreds of jets overseas as consumers and businesses scrap travel plans. The most significant operational impact for U.S. carriers has been mass cancellations into April of flights to and from Asia…. Now there are mounting signs of softening travel demand in the U.S., as people skip trips and businesses instruct employees to stay put….

Interest rates cuts don’t cut it. They don’t solve any of that.

Regardless, I thought the stock market would rise if the Fed cut rates, in spite of the fact that it would do nothing to help the economy. I thought it would rise on its usual euphoria until it it got enough sense to figure out rate cuts mean almost nothing in this environment, and then it would crash. What I didn’t think was that the long-euphoric market would rise for only a minute (straight up with a huge jolt) before it started to realize this wouldn’t work and then would figure that out in the course of the same day it rose:

The market is conditioned to bet stocks up regardless. That would most likely play out like Wile E. Coyote running out over a cliff, looking down, and then falling like an anvil. The market would rise until it realizes the economy is falling in spite of the Fed rate cuts, and then the market would crash even harder than it just has because investors suddenly realize they have bid out over nothing at all.

It did all that, but just a lot faster than I (or I think anyone) thought it would. Faster than investors thought it would. The market digested the Fed’s medicine over the course of the day and got worse and worse all day long as the wrong medicine gave it a migraine and indigestion.

This confirms what I’ve said for years. A time would come when the diminishing returns of the FedMed would become so bad the bell curve would go down in a reverse affect. That would be when we’d know we’re in a world of hurt. We’d know the Fed has nothing left in its medicine cabinet that will work. It has to find new medicine.

That said, there are concerns a supply shock will spill over into a demand shock as well…, and the Fed’s move appears aimed in part at providing insurance against that possibility.

Seems to be a lot of insurance going on of late. This makes the equivalent of five rate cuts (of the size the Fed has typically been making) half a year.

The Fed may, in fact, be trapped. As I also noted in my last article,

If the fall in supply outstrips already softening demand (which is falling faster now due to people not going out to eat or shop as much and not traveling as much), we’ll have shortages. Scarcity means rapidly increasing prices, and that means the Fed will have no room to lower interest rates. Bottom line: you cannot fight a supply-side recession with monetary policy or fiscal policy.

That will depend on whether we spill over into the demand side as MarketWatch noted it could. If it doesn’t balance the reduction in supply with the reduction in demand, then the Fed could become trapped from even making interest cuts because of inflation.

What everyone just saw is that the Fed is in a jam and that it didn’t even know its medicine won’t work anymore! That scared people! Just look at normally bullish Jim Cramer almost writhing over what the Fed has just done. You can see the worry on his face:

My next Patron Post that I’m working on was already going to examine where the Federal Reserve goes from here now that it is about out of medicine and because its old medicine isn’t going to work as it once did. I had already gathered the words of central bankers to lay out the likely plans for the time beyond their imminent failure.

Now that the Fed already tried its old medicine on Tuesday in an emergency action taken before its regularly scheduled meeting, we’ve seen the patient’s adverse response as the market went into paroxysms. That makes this topic all the more timely and important.