Yesterday, the Fed cut interest rates by 50 basis points. Not during a regular monetary policy meeting, but in a surprising move. But what are the implications for the gold market specifically?

Last week, I wrote that the spread of the new coronavirus to Europe and the inversion of the yield curve make “the Fed more likely to step in and cut the federal funds rate, you know, “just in case”. And in yesterday’s surprise move, the Federal Reserve cut the federal funds rate by 50 basis points in response to the coronavirus threat. The decision was unanimous and it was communicated in the FOMC statement, as follows:

The fundamentals of the US economy remain strong. However, the coronavirus poses evolving risks to economic activity. In light of these risks and in support of achieving its maximum employment and price stability goals, the Federal Open Market Committee decided today to lower the target range for the federal funds rate by 1/2 percentage point, to 1 to 11/4 percent. The Committee is closely monitoring developments and their implications for the economic outlook and will use its tools and act as appropriate to support the economy.

Without doubts, the move is huge. First of all, the US central bank cut interest rates not by 25 basis points, as usual, but by half a percentage point. It was the first such cut since the Great Recession. And the FOMC slashed the federal funds rate before its scheduled meeting on March 17-18, which is a very rare move. Taking monetary recession decisions between regular meetings with a bigger than normal interest rate cut, implies that the Fed is scared as hell.

Or that the US central bank was simply told to slash interest rates. Maybe not coincidently, the move came the same morning that G7 officials offered unspecified measures to help impacted countries. And President Trump has been tweeting intensively in recent days, pressuring the Fed to act. In yesterday’s morning, he wrote:

Australia’s Central Bank cut interest rates and stated it will most likely further ease in order to make up for China’s coronavirus situation and slowdown…Other countries are doing the same thing, if not more so. Our Federal Reserve has us paying higher rates than many others, when we should be paying less.

Fed’s Cut and the Economy

Will the Fed’s dovish action help to contain the virus? To ask such a question is to answer it. Will the Fed’s panic move fix the broken global supply chains? Another rhetorical question. The monetary policy is powerless when faced with supply problems. When you cannot get the necessary inputs from Asia for your factory, whether the interest rates are 50 basis points higher or lower is irrelevant for you. So, the Fed’s move is unnecessary and it will not help the global economy with the impaired supply chains.

What the Fed can do, is to trigger panic in the markets. Initially, the stock market welcomed the news. But later it turned sharply lower. It suggests that the Fed’s panic move made traders feel more nervous about the coronavirus and its impact on the economy. Indeed, the CBOE Volatility Index has returned to nine-year highs after the move. After all, the Fed officials were talking all the time that they were monitoring the situation, that everything is fine, and then, boom, a surprise cut by 50 basis points! So investors could think “if they act like this, the situation must be worse than we thought”. Powell justified the move by the material reassessment: he said during the press conference that “the coronavirus poses a material risk to the economic outlook”.

Yeah, he suddenly realized it! For me, it looks like a panic response to the plunge in the stock market (Fed’s put is always is place!) and to the inversion in the yield curve. As you can see in the chart below, the 10-year Treasury yield has dropped to a record-low of 1.1 percent yesterday and later (not visible on the chart) even below 1.0 percent. 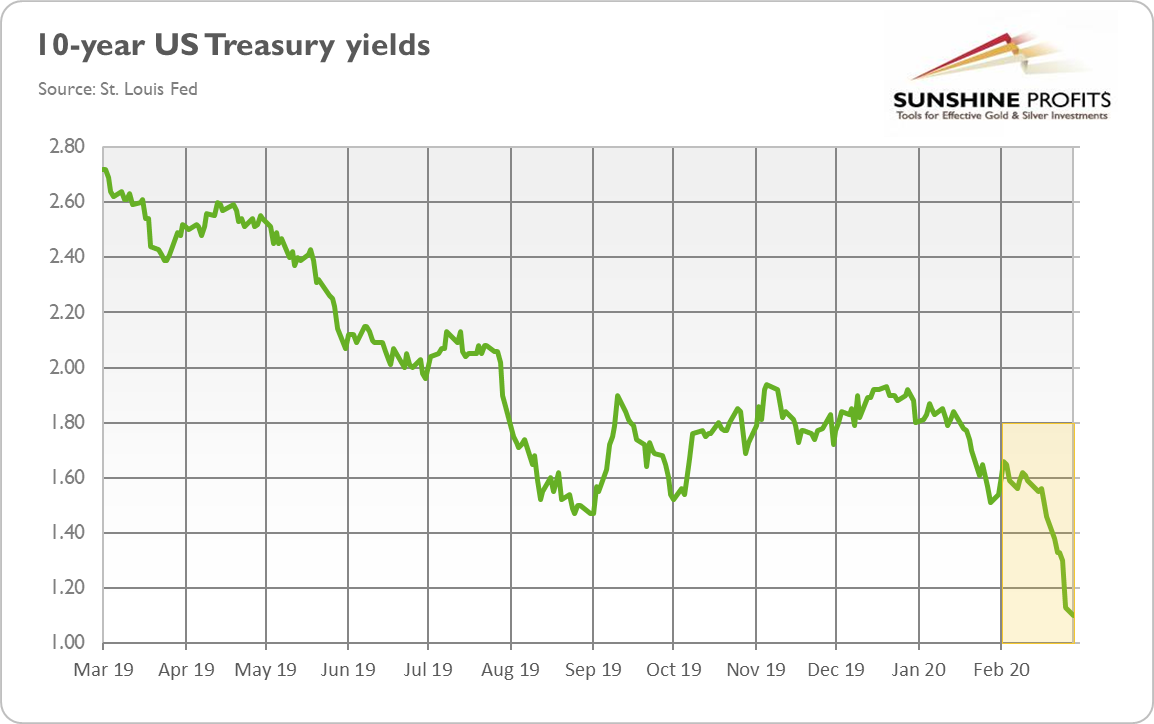 What does it all mean for the gold market? Well, from the fundamental point of view, the environment of fear, ultra-low interest rates, weak equity markets and elevated stock market volatility should be positive for the yellow metal.

It’s true that gold saw a major sell-off last week. However, its price jumped again to $1,640-$1,650 in a response to the Fed’s move. The scale of a move might seem to be a bit disappointing, so investors should be aware of a possibility of further downside, as the precious metal will continue to feel some pressure from investors’ liquidity needs. However, it might be just a replay of 2008, when gold was initially dumped in order to meet investors’ margin calls only to rally later. The good news is that the markets expect further Fed’s interest rate cuts on the way – it lays the foundation for future gains in the gold market.