The bear roared today, ripping the ears off everyone, as the Dow and Russel 2000 both landed more than 20% below their last peak. Their 19-session rampage landed a record as the, steepest, fastest downhill bear run in the history of the US stock market.

The market’s waterfall run over the cliffs now looks like El Capitan. 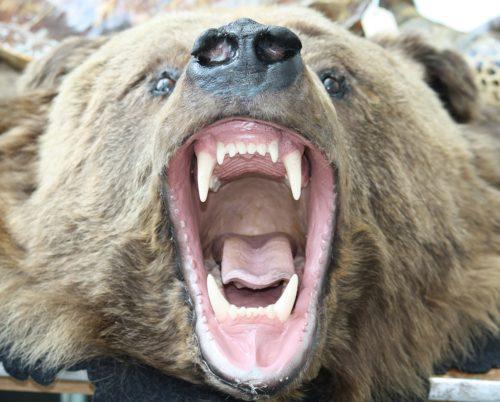 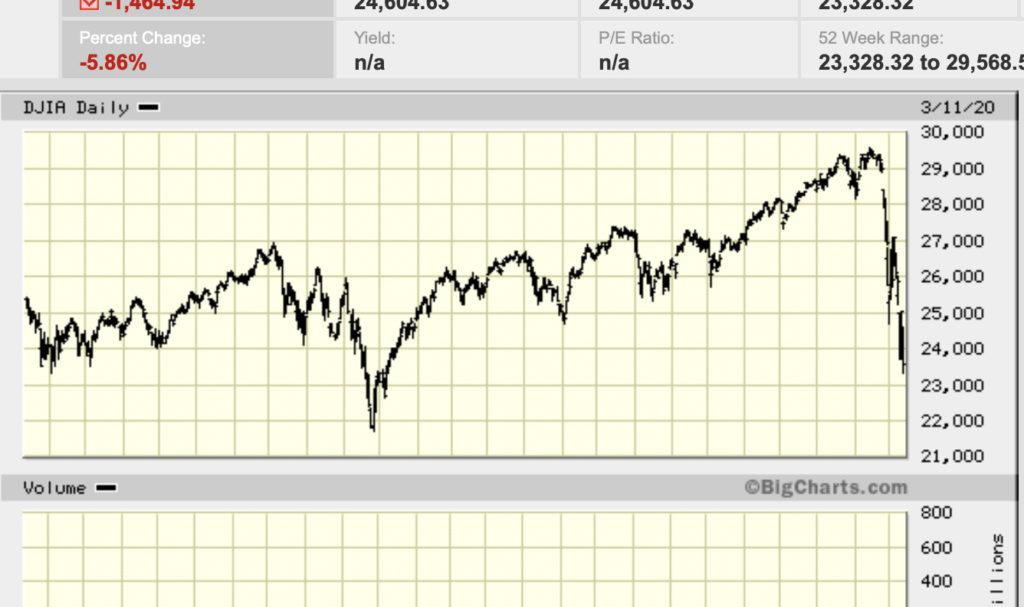 Of course, the rise of the bear also means the “longest bull in history” just died today, and it died in spite of the Federal Reserve’s most heroic efforts to turn up the bulls life support by any means.

This bull market will go down in history as the one that nobody believed would last this long. A lot of people have been hurt because their retirement money disappeared…. What brought us to where we are in 2020 is too much hope, sky-high valuations.

As if to underscore everything I wrote in my latest Patron Posts about how impotent the Fed has become, the bull died today just as the Fed cranked up the voltage on its repo-QE defibrillator for the second time in just one week. On Monday, I noted how the bull dropped to its knees when the Fed administered a double dose of its interest cuts the week before and how it fell to its side on Monday when the Fed increased its historically massive overnight repo operations by 50% from $100 billion to $150 billion. (See, “Dow Crashes 2,000 Points in Record Day! The Bear is at the Door.“) Well today, the Fed cranked the voltage of its overnight repos to $175 billion to try to stabilize the bull fibrillating heart, and bull died completely. Fed medics also offered two epinephrine shots totaling $95 billion in term repos today, but the bull didn’t stir. The “longest-lived” bull in history was pronounced dead at 4PM eastern daylight time today.

To quote the chief market strategist at Prudential, who summarized the bulls death on the scene:

Did I see it coming this far? No. Throughout the past 11 years, the market has had a lot of dips, and always the Federal Reserve came to the rescue…. Right now, the Fed is not enough, central bank action is not enough. There is a pyramid of uncertainty right now.

If you think the Fed didn’t go above and beyond in its resuscitation efforts, look at how the Fed’s latest emergency liquidity doses dwarf the emergency repo operations that happened all through last fall (those temporary epipen cash injections that I said would become permanent): 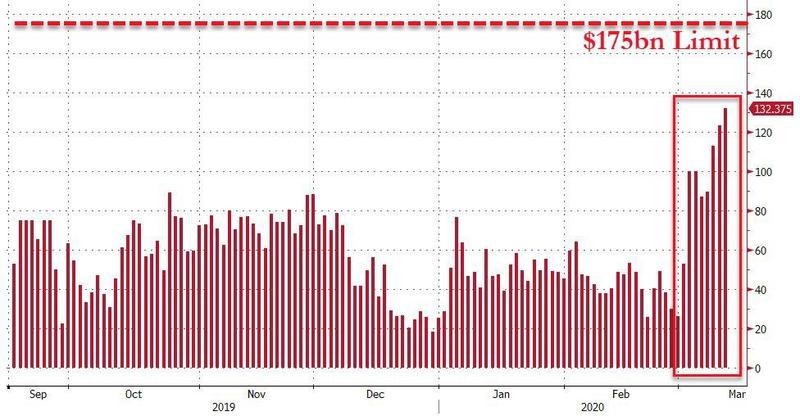 They make previous emergency Fed funding look like yesteryear’s skyscrapers compared to Dubai. (And speaking of Dubai, oil fell off a pricing cliff again today, too.) How much greater proof can there be that the Fed is dead. (Well, it will find new medicine, but let’s just say it’s old ammo ain’t hunting’ bear no more. That’s for sure. As David Stockman has been saying, the Fed is clearly out of dry powder.) The Law of Diminishing Returns hit full force right when I said it would — when the Fed, after tightening until it strangled its “recovery,” tried to go back to easing to save it again.

As I said years ago, when this day of moving back to easing finally came, we’d find that the Fed’s old tricks actually have a reverse (negative) effect at this point. Too much epinephrine kills the bull. Over the past ten days, we saw that every time the Fed tried to revive its dependent market. To put it from the bear’s perspective, instead of the dead bull’s, that’s what happens when you go bear hunting with a BB gun and shoot the bear in the eyeball. All you do is make him mad, and that’s about all the Fed’s old ammo now amounts to is a BB gun.

In giving the bull a postmortem, market morticians did not turn as readily to the coronavirus diagnosis as I thought. (But don’t worry, politicians and the Fed will.) These forensic scientists were pretty to-the-point in putting the blame at the Fed’s feet.

“We got here because of unusual, potentially unprecedented circumstances [coronavirus] and because a strongly held consensus baked into market prices has been shattered.… The sharpness of this adjustment, then, is the result of the collision of crowded trades implemented during exceptionally quiet times with a bona-fide turning point in the business cycle.”

Those quiet times were a Fed-induced low-volatility coma. One of the Fed’s former priests, former Dallas Fed President Richard Fisher, spoke with rare candor about the bull’s Fed-induced coma over the aging bull earlier this week as he administered its last rites, laying the blame squarely on his own institution:

Does The Fed really want to have a put every time the market gets nervous? …Coming off all-time highs, does it make sense for The Fed to bail the markets out every single time… creating a trap?

The Fed has created this dependency and there’s an entire generation of money-managers who … have only seen a one-way street… of course they’re nervous.

The question is – do you want to feed that hunger? Keep applying that opioid of cheap and abundant money?

Perhaps it can be said that the Bull grew fat on FedFood and died of an overdose of FedMed intended to save its heart from myocardial infarction due to morbid obesity. The induction into the anesthetized state spoken of above was administered via stock buybacks, which for years were in large part made possible by cheap Fed-sponsored credit. As I warned some time ago, corporations were becoming over indebted. Their bond issuances were increasingly being rated junk or near junk. Therefore, I said, buybacks would be dwindling in the latter part of 2918 and throughout 2019 because the issuance of cheap credit was reaching its limit as was the one-time benefit of foreign profit repatriation at lower tax rates (the other main supply).

Now we can see how that likely played a part in the bulls death just. Buybacks hit a low just as the bull turned eleven and died: 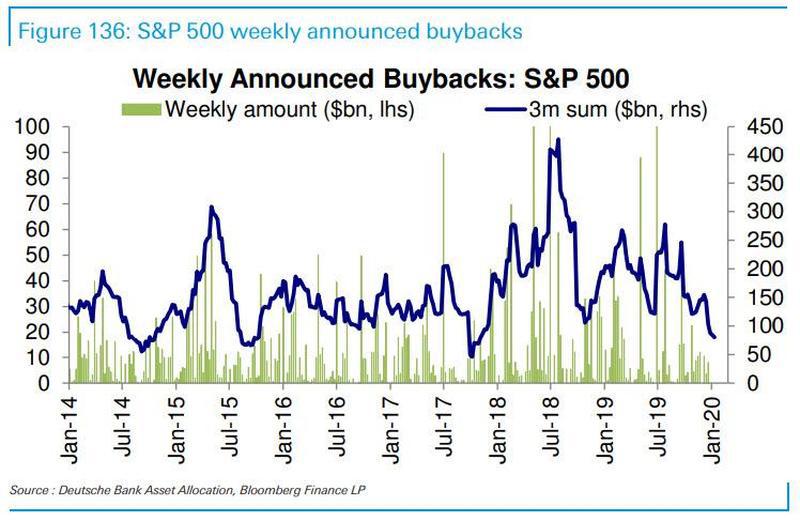 Corporations did try ramping up buybacks at the start of the coronavirus in a last-ditch effort to save their bullish butts, but they quickly ran out of cash and credit as credit rates on high yield bonds began to soar right when they needed new hits the most. Of course, this is what you get when you use up all your cash and credit in purportedly good times buying up your stock because the times really weren’t so good, and you were covering for a lack of earnings. Had the money for foreign-profit repatriation not been spent on buybacks, corporations would now have plenty of money to see themselves through these tight times; but if you spend your cash hoard like a prodigal when the times are supposedly good, you have no cushion when times turn bad.

Looking ahead: In the aftermath of the bull’s death, Zero Hedge has reported that US financial conditions are now rated by Bloomberg as the worst since Lehman Brothers:

And we’re just getting started!

It seems neither bankers nor their pocket politicians can keep this bear from roaring. This evening, thanks to Trump’s stock-stimulus speech about killing all flights between Europe and the US while raising the national debt at a fever pitch with additional tax cuts and additional spending, Dow futures dove more than another thousand points in response! Oops. The Nasdaq and S&P also plunged 4.5%, basically resting on their down limit. That decline, if it holds tomorrow, will finish the fall of both of those major indices into bear territory, too, completing the market’s transformation. Futures were lumbering slowly downhill before the speech, but the bear — awakened out of winter hibernation — really roared right after.

Trump’s own stock market! Now that’s just, shall we say to be nice, “Fouled Up BEyond All Recognition.”

One thought on “Stocks Crash Into Bear Market Faster Than 1929!”