On Sunday, the Federal Reserve cut interest rates and restarted quantitative easing to stimulate economy hit by the pandemic of COVID-19. That’s already its second move prior to this Wednesday’s FOMC. What does it imply for gold?

Winter is not coming. Winter is here already. The situation does not look too good. Although the epidemic seems on the way out in China and South Korea, the situation in Europe and the US is deteriorating quickly. As you can see in the charts below, the new daily cases are quickly rising, making the total number of infected people doubling each 3-4 days. And please note that the chart shows only confirmed cases – the true number of infected people is almost certainly larger, especially in the US, where shockingly low number of tests have been conducted. 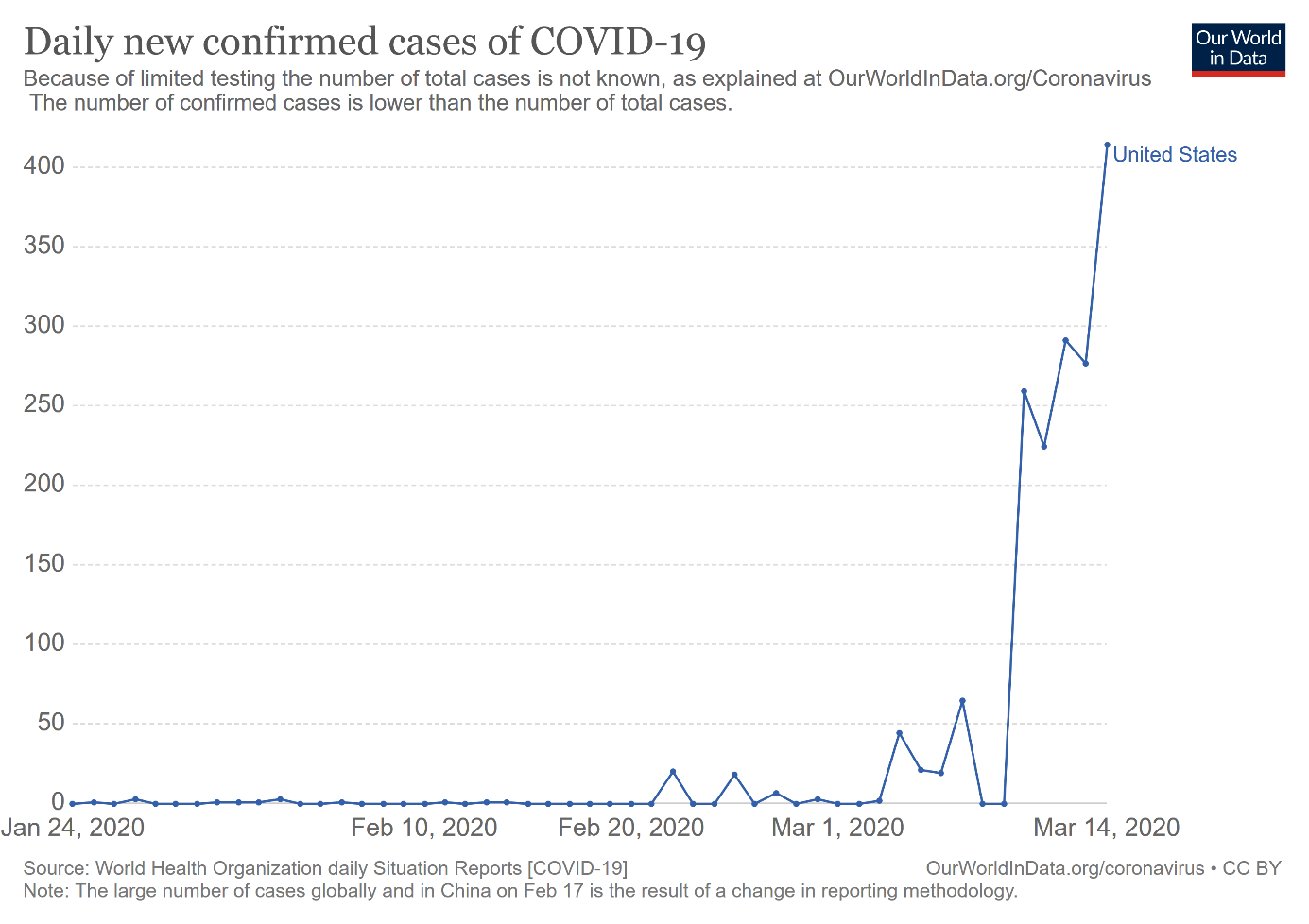 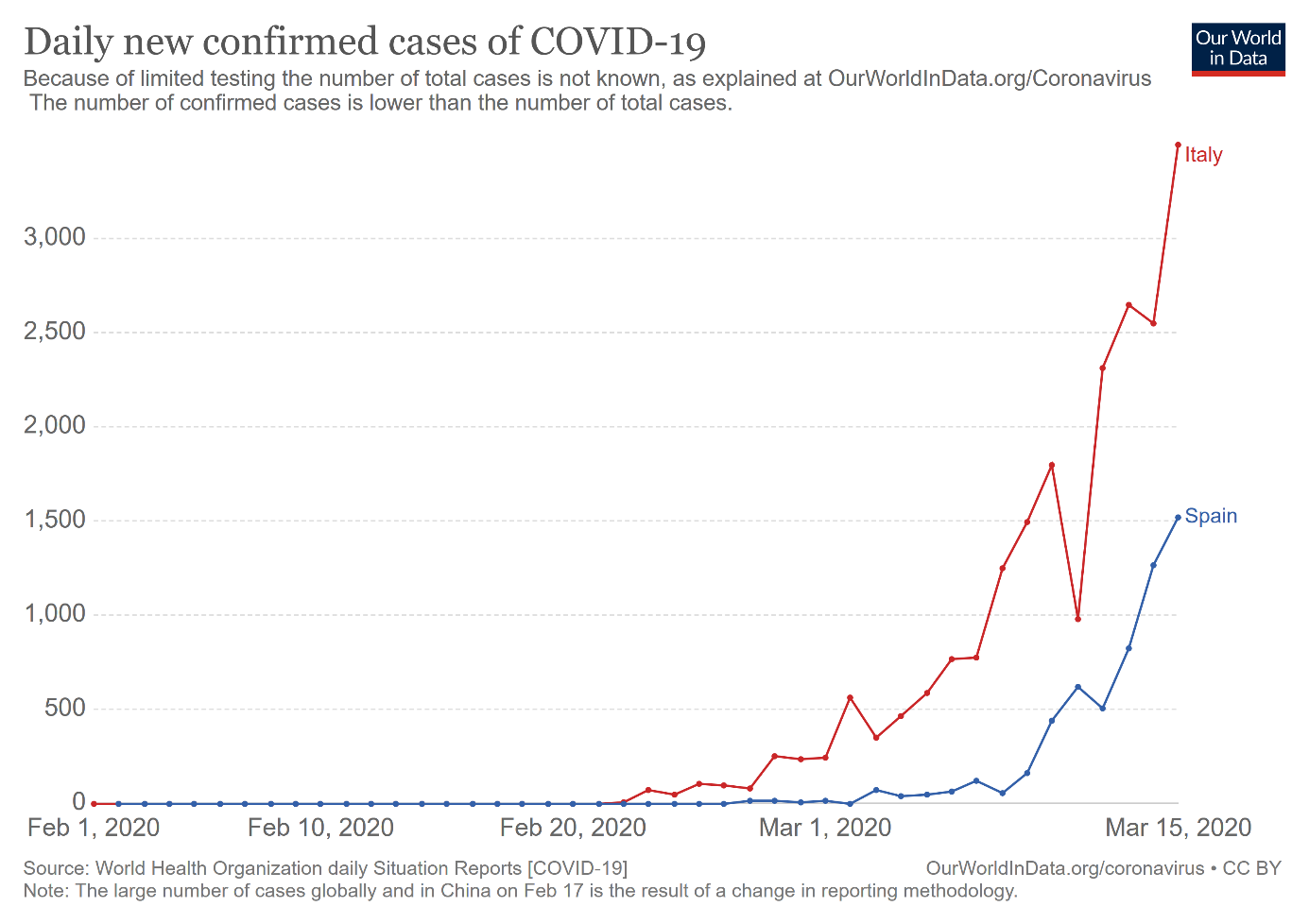 Before I go on and analyze Fed’s actions, I have to admit to while I was always concerned by the current epidemic as it leaped outside of China, I underestimated its health and economic impact. Surely, I’m not an epidemiologist – and I wasn’t the only one (think about the Italians, the White House or Spanish PMs’ wife), but I should be smarter than the governments. It’s of little comfort that the whole world and markets overlooked the danger for so many weeks, and we’re all paying the price now.

One reason is that media are always panicking. Fear sells. They cry a wolf all the time, and when the true wolf comes, no one believes the boy that cried wolf too many times. Second reason was that when I analyzed the previous pandemics, such as SARS, MERS, or Ebola, they all were short-lived and their health and economic impact was limited. But, as I already suggested this likelihood, in one of the previous editions of the Fundamental Gold Report, this time is really different.

Why it is different? Well, it is because the new coronavirus is really smart. You see, Ebola was a stupid virus. It was very lethal, but it killed its hosts so quickly that it could not be with such ease transmitted to the others. MERS was not easily transmitted among people. And SARS was quickly contained because people transmitted the virus only well after they had symptoms. So, the authorities could easily track the infected people and isolate them. Problem solved. But the new coronavirus has a deadly combination of features. It is less lethal now than it was initially, and is more contagious. And people can transmit it before they have any symptoms. They can even have no symptoms at all!

All this means that containment is practically impossible. And comes with bringing the economic activity to a standstill. A very heavy price to pay. Let’s face it. A high percentage of world’s population will be infected. And many will die. We do not panic, but this is a fact. What we can done is to break its exponential trajectory, mitigate its impact and flatten the epidemiological curve, as the chart below shows.

Chart 3: The idea of flattening the curve. 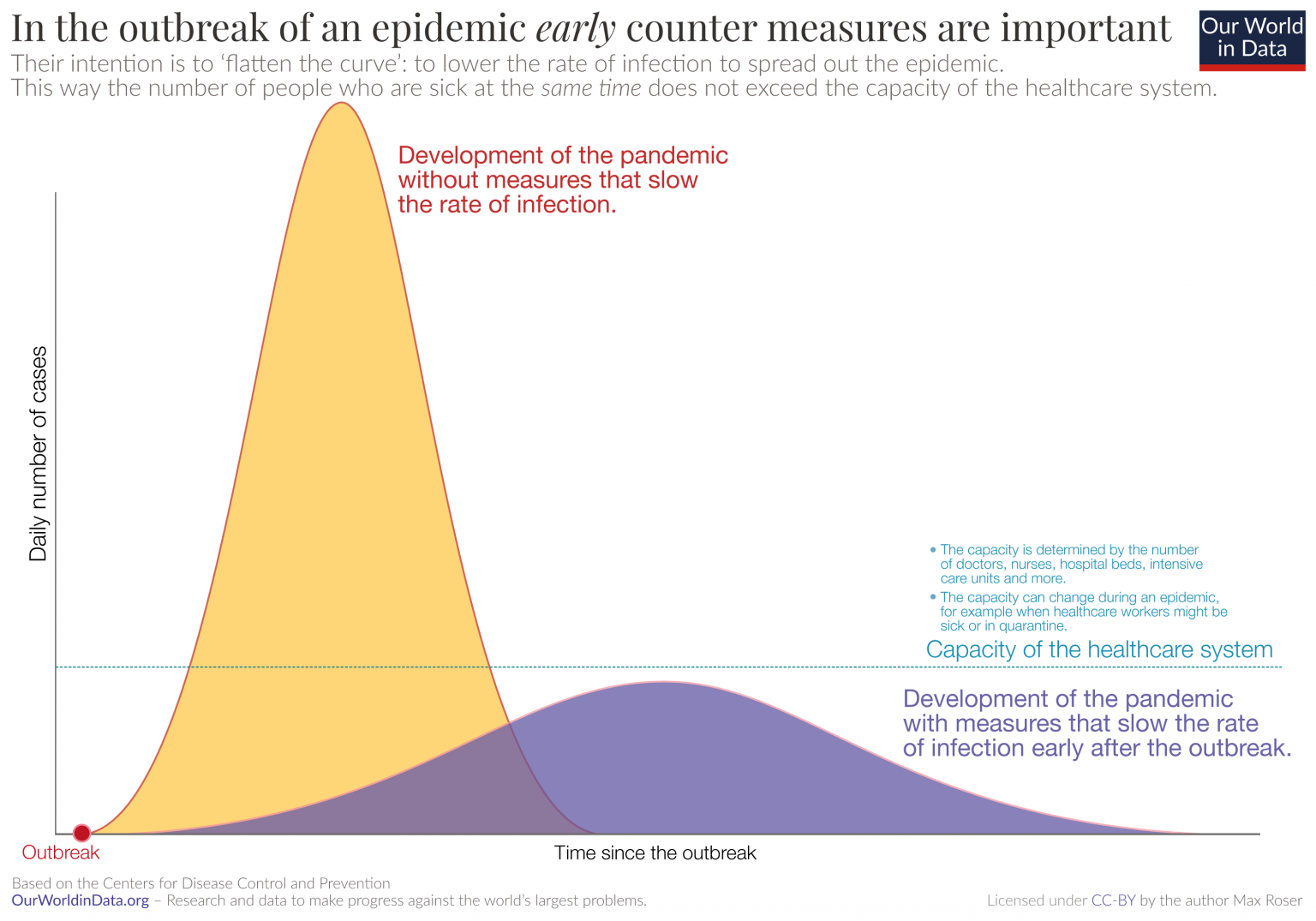 In this way, we can slow the rate of infection to prevent the healthcare system from the total collapse. The good thing is that the mortality rate is generally low, especially among children and the young and healthy. But the problem is there are many people with health issues. A great percentage of Americans are obese and not too few are smoking – which worsens their situation. All this means that it’s probable that the pandemic will not be a short-term issue we can quickly deal with, but that it will stay with us for months (I recommend this podcast with Micheal Osterholm, expert in infectious disease epidemiology, especially the first fifteen minutes)…

Ok, What Did the Fed Do?

On Sunday emergency meeting, the Fed slashed the federal funds rate to zero, or to almost zero, to be precise:

Consistent with its statutory mandate, the Committee seeks to foster maximum employment and price stability. The effects of the coronavirus will weigh on economic activity in the near term and pose risks to the economic outlook. In light of these developments, the Committee decided to lower the target range for the federal funds rate to 0 to 1/4 percent. The Committee expects to maintain this target range until it is confident that the economy has weathered recent events and is on track to achieve its maximum employment and price stability goals. This action will help support economic activity, strong labor market conditions, and inflation returning to the Committee’s symmetric 2 percent objective.

Moreover, the US central bank has expanded its repo operations and reintroduced the quantitative easing:

Will these actions help the economy? Now, they won’t. Has the Fed’s first cut helped to prevent the COVID-19 spread? No, it has not. If an entrepreneur cannot obtain the inputs badly needed for his factory, or if employees do not appear at work, the level of interest rates does not matter. Neither Powell, nor Lagarde, nor any other central bankers have any power to open production and service facilities closed due to quarantine or to push employees back to work, and consumers back to stores, cinemas, pubs and travel agencies.

Anyway, let’s assume that the problem is related to the demand, not to the supply (as politicians and central bankers will probably argue). How should interest rate cuts help if people are encouraged to stay at home and, therefore, reduce economic activities? Which companies will start investing more in a period of reduced demand, supply chain disruptions, falling stock prices, and increased uncertainty in general?

Since ultra-low interest rates did not help to revive exceptionally weak economic growth after the Great Recession, it will not help much now. Coronavirus affects the economy mainly by changing people’s behavior – the actions of central banks will not change them. We deal with the healthcare crisis, not the liquidity crisis – so the extra liquidity will not help.

What does it all mean for the gold market? Well, panicked central banks reintroducing quantitative easing and ZIRP, combined with great fear and plunging stock markets, are fundamentally positive for the gold prices.

If so, why the heck the gold price has declined today below $1,500? That’s a good question. As I said previously, cash is king in times of crisis. Investors desperately sell everything to raise cash to meet their margin calls. We see a replay from 2008 financial crisis, when the gold prices initially fell – but started to rally after a while. The epidemiology of COVID-19 suggest that this crisis will be larger than almost everyone initially thought. And the fact that the Fed acted in a panic mode just three days before the scheduled meeting suggests that we can expect really horrible data in the next few weeks. So, I think that the path of least resistance for gold is to rise in the medium-term – the only question is when it will happen.