Skip to content
HomeWhere Will The US Stock Market Crash End?
By David Haggith – Re-Blogged From Silver Phoenix

As the carnage continues with stocks now ignoring anything the Fed throws at them — and the Fed has pretty well thrown everything it has used in the past and is now moving into bailout mode — where is the US stock market crash likely to to stop falling? So far, it’s been limit-down all the way.

Before posing “The Fed is Dead” later today, I wanted to rush this out because I can get it published quickly:

The above graph shows two reasonable targets that I would suggest. 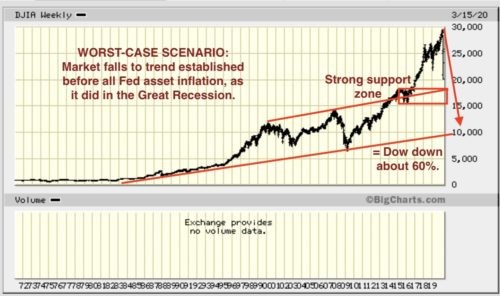 My best case scenario for the US Stock Market Crash

I am completely convinced it won’t end better than this, and I think it is only likely to be a resting platform unless the Fed leaps into strategies I’ve been talking about in Patron Posts that are currently illegal.

This level is based on the zone where the bull stopped running for two years and churned sideways as a place it hung out when the Fed stopped QE. That was back when I said the market would crash because of the end of QE, and it didn’t quite do exactly but, but the bull was broken. The market stalled for two years, so not really a bull in my books — at best a bull in a coma).

With the Dow ignoring the Fed’s kitchen-sink solutions again today and ending down more than an unlucky 1300 (at 1,3338, having touched again on 2,000 down intraday), it looks like we’ll enter the market’s old hang out in the rectangular safety zone sometime this week.

When the US stock market crashes down into the safety zone, the entire Trump Rally going back to its first inkling since the day after he was elected will have been destroyed — so fundamentally “strong” was the economy that supported it all. (Be careful what you believe from the lips of politicians. I don’t care who they are or even if I voted for them, as I have been known to loudly criticize ones I voted, for, too — like George Bush II. I’ll own my foolishness, but I won’t repeat it.)

A likely worse-case scenario for the US Stock Market Crash

Maybe stocks will take a rest there and bounce around inside that two-year safety zone for awhile. Maybe. Until the continuously growing downdraft of the general economy sucks the market all the way into the belly of the Great Recession again.

The next level down from the rest stop is based on where the market’s long-term trend would be if you project the line to the present day (the trend it dove down to in the belly of the Great Recession).

That deeper trend, as you can see, is exactly where the market would be if you wiped out all the Fed’s excess fiat fuel that inflated the dot-com bubble before it burst and then filled up the housing bubble before it burst and now has formed the Everything Balloon — far beyond a mere bubble. It’s where I see the stock market as settling out with the one caveat that the Fed will continue doing everyone it can dream of to bubble us back up somehow.

My easily possible worst-case scenario for a market crash

First, let me say there is no true worst-case scenario short of the US stock market crashing into the pits of hell because no one knows where everything that is happening right now will end. But I’m dealing with where this could easily go based on what we already know about the coronacrisis.

All major indices are now down more than 30% from their last high, so we are already deep into bear territory. The Russell 2000 is down 40%! Forget any thought that this is not an all-out market crash! (If you are foolish enough to still be holding such a thought.) I mean, 40% declines in one month? That’s looking more like 1929 than the Great Recession! And those are just the facts.

That lower trend line is actually the ideal optimistic line we should hope to stabilize at — IF the Fed got out of the bubble-blowing business but it won’t. Downward momentum could easily carry the US Stock market crash down to a straight line across the bottoms of the last two recessions, which would put the Dow down at about 6,000 until it recovered back to the baseline trend.

It won’t be just the US. It’s an everyone crash of the Everything Balloon.

A global recession is now the base case, say Morgan Stanley economists led by Chetan Ahya; they see growth falling to 0.9% this year. The Goldman Sachs team, led by Jan Hatzius, sees growth weakening to 1.25%.

And those guys are the optimistic ones, just like they we’re going into the Great Recession. In my next article (to be published later today), “The Fed is Dead” and the one to come out after tomorrow “The Bailout Bonanza is Back” you’ll read some mainstream economists with far more pessimistic views.

So, the levels outlined above are the highly optimistic ones. Hate to be so cheery; but, seriously, things can go lower if the virus goes longer and takes out enough of the tinder-dry dead wood we have built into our economy all along.