The soup lines hadn’t formed yet. Jobs had not even noticeably started to dry up, but they weren’t as easy to find anymore. You had to be angry to quit without having a better job firmly in hand. Stocks were climbing furiously above an economy that had been slowly ebbing away since summer. Sales were down for months, so revenues were down for months, and profits were down. Funding in the world’s easiest credit market — interbank repos — was extremely tight — so tight the Fed had to come to the rescue every single day for months, and the problem was only getting worse.

Such were the times before COVID-19 struck the world in 2020 like an asteroid from some far reach of the solar system crumbling the walls that already sat on cracked foundations, burying in ash a partying world that hadn’t yet figured out it was already slowly dying from its own internal decay. 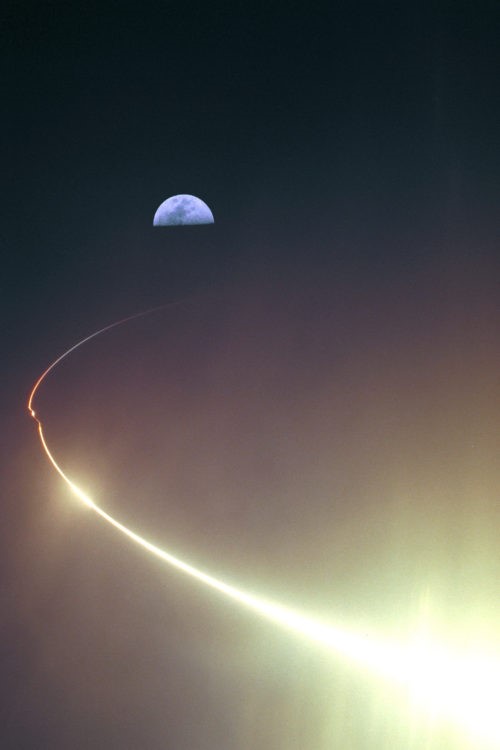 Archeologic evidence of a society already in decline

Now we are left to dig up a modern Pompei and piece together what life was like before the explosion of the viral impact event. What follows are the last statistics to come in from the days just before the earth-shattering crisis hit. These are the final numbers that foreshadowed a nation’s deep decline.

The leading economic index rose a slight 0.1% in February, but that was before the coronavirus began to bring U.S. growth to a standstill…. “It doesn’t reflect the impact of the COVID-19 pandemic which began to hit the U.S. economy in full by early March,” said Ataman Ozyildirim, director of business cycles research…. “As a result, the economy may already be entering into a period of contraction.”

Therein lies in the ash an encapsulated tale I’ve been telling of an economy that was already receding before the crisis hit. A rise so small implied a drop in GDP growth of almost 50%, which would have taken GDP growth down in the present quarter from its nearly yearlong stagnation at 2.1% to about 1% without any viral impact.

As one reader noted, in comment to that article:

This slight rise in leading indicators does not change the unfavorable trends in our economy that evolved over the last year (ever since the temporary, tax-cut boost to our economy wound down).

The fix was in, and it didn’t fix anything.

Services had also been in decline since mid-summer but plunged below the recession mark (50) in February of 2020 just as the coronavirus asteroid hit the US in the second half of the month: 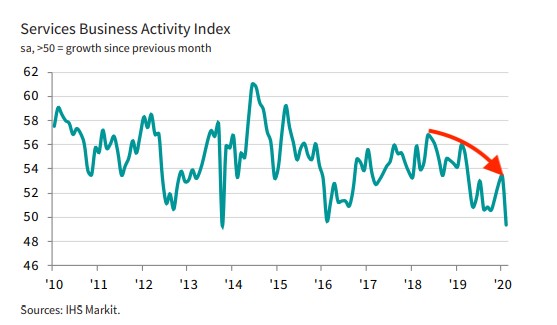 Consumers were already pulling back and tightening their belts to live within their means as early as January when no human thought was being given to the coronavirus:

Revolving credit, namely credit cards, declined at a 3.3% annual rate in January. That’s the second decline in the past three months…. Consumer spending has fueled the economy in recent quarters as business investment has retreated.

With consumers backing off, and consumers being the only thing that had been keeping the economy barely out at recession water level, the economy’s submersion was nearly certain without the tsunami from the impact event that rapidly finished the job.

These are the last vestiges of indicators that came in before the crisis hit. They tell of twilight times slowly settling over a world soon to be struck with an exogenous event that no one saw coming.

The US and global economies were declining due to insidious problems that existed deep below their surface — problems often described here like vaults full of collateral that didn’t actually exist because the same collateral had been used several times for concurrent loans; corporate accounting that had crept for years away from a high standard of days gone by called GAAP; a cavern of cheap debt carved out beneath corporate earnings that were jacked up by use of that debt in a world where the cost of that debt was about to soar; a mountain of leveraged loans and bonds that were teetering already on being downgraded to junk; cesspools of corruption that were never dealt with after the last crisis; major global banks like Deutsche Bank and Wells Fargo that had been sinking into their own corruption for years; the largest gulf between the rich and the rest the nation had even known; quarter after quarter of stagnating economic growth funding a national deficit that was already ballooning at a rate of a trillion dollars every year. If measured as a pile of tightly compressed dollar bills, each year’s US deficit would reach a quarter of the way to the moon … right along the unseen incoming asteroid’s path!

It was into that decaying, sloppy, insensible world that the virus crashed with the impact of a large meteor that was pulled by earth’s gravity into its atmosphere, lighting space rock on fire and exploding on impact. The cracked foundations of civilization’s structures immediately crumbled, and its high towers toppled faster than its citizens ever thought possible. Crowded highways became nearly vacant. Those who had been coming and going about their business as if nothing could hurt them, ended their business activities overnight, and citizens isolated themselves by sheltering in their homes. Most of society waited on hold as numerous states and nations entered official lockdowns — waited to see how great the destruction from COVID-19 would be.