There’s more evidence finally surfacing in the media of the dire energy predicament the world is now facing.  The negative ramifications of peak oil and the falling EROI were going to hit the world economy within the next 2-5 years, but the global contagion has sped up the process considerably.  Unfortunately, the world will never return back to the energy consumption and GDP growth experienced in 2019.  I believe the peak of unconventional oil production has finally arrived… FOREVER.

According to Shaleprofile.com, the Bakken’s production peaked in October 2019 at 1,506,358 barrels per day (bd) and fell to 1,462,025 bd in December.  When the data comes out for Mar-Apr-May, I believe that Bakken’s oil production will begin to drop off considerably.

Furthermore, even without the global virus destroying oil demand, the Bakken was going to peak shortly due to a key indicator… a tremendous increase in the amount of wastewater.  Surging wastewater production is a bad sign signaling reservoir depletion.  Using the data from the North Dakota Department of Mineral Resources, the Bakken is now producing nearly 1.5 barrels of wastewater for each barrel of oil: 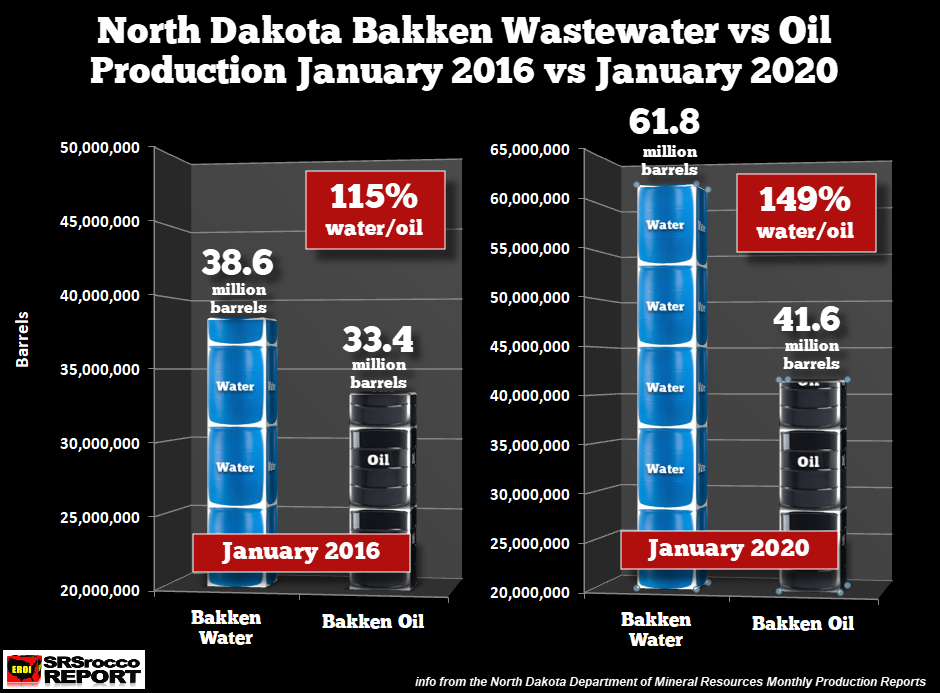 The Death of the Bakken has finally arrived.  Due to the collapse in U.S. oil consumption, I see a huge decline in Bakken oil production over the next three quarters. 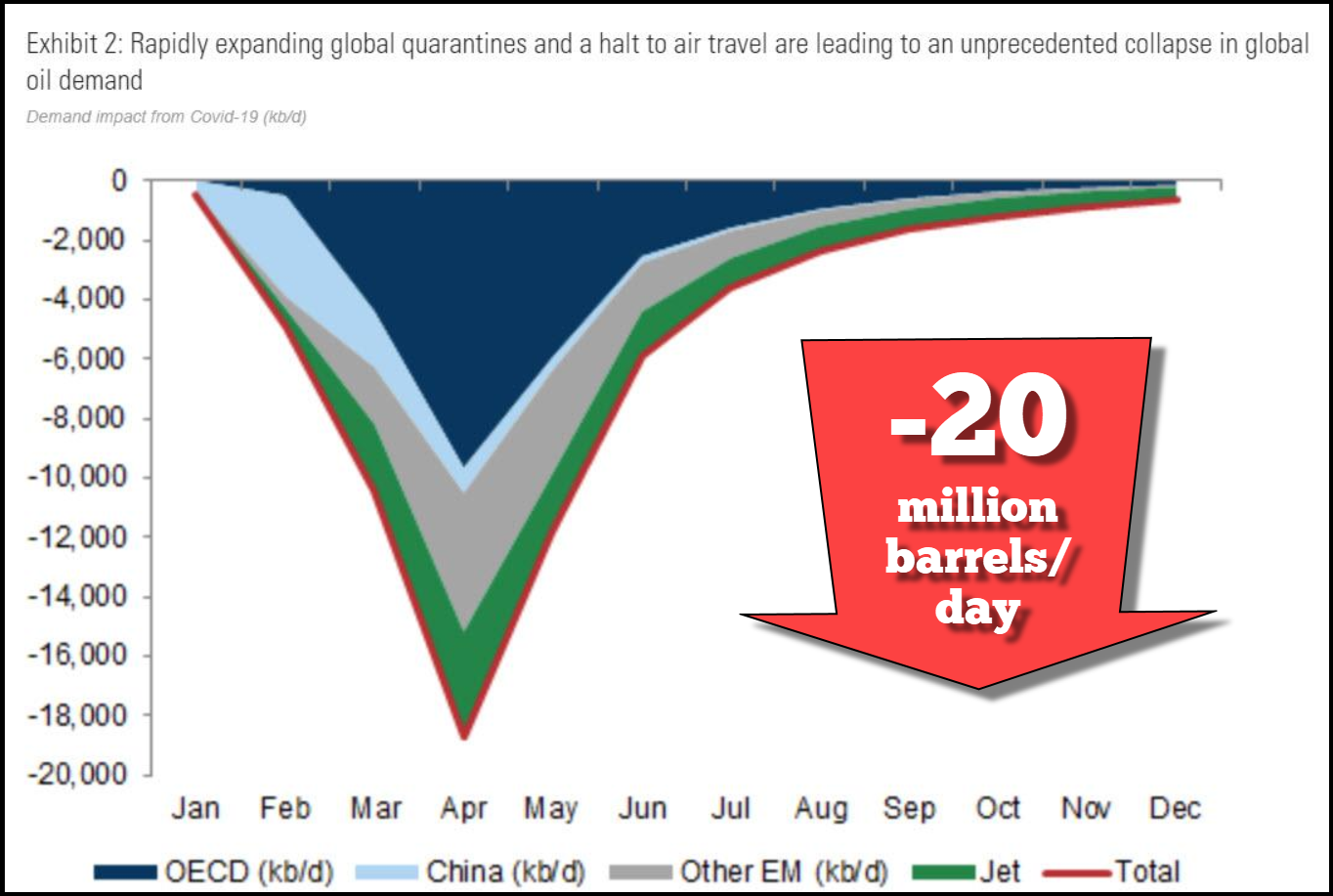 This was an article on Zerohedge that stated the following:

This echoes what Goldman’s commodity analysts wrote overnight, warning that “global isolation measures are leading to an unprecedented collapse in oil demand which we now forecast will fall by 10.5 mb/d in March and by 18.7 mb/d in April” or nearly the 20mb/d forecast by the IEA. As Goldman sumamrizes, “a demand shock of this magnitude will overwhelm any supply response including any potential core-OPEC output freeze or cut.”

I believe the IEA’s forecast for a decline of 18.7 million barrels per day (mbd) in April will be grossly understated.  It will likely fall 25-30+ mbd by April. Interestingly, the IEA – International Energy Agency shows that global Jet fuel demand will fall about 2 mbd.  However, with U.S. commercial air traffic down 90%, Unprecedented Collapse: U.S. Airline Traffic Currently Just 10% Of Normal, I see global Jet fuel consumption down at least 4+ mbd in April, double the IEA’s figure.

Now, it seems as if the IEA believes Wall Street’s forecast that there will be a “V-Shaped Recovery,” (hence, the v-shaped oil chart) and everything will be back to normal by the end of the year.  I highly doubt it.  Also, I find it quite interesting that the IEA hints that the Saudi’s and Russia need to halt all production to balance the market?  Really?  What about the United States??  Why isn’t the U.S. included in these figures??

With the United States now the largest oil producer in the world, why are Oil Company CEO’s and politicians calling for Saudi Arabia to halt oil supply?  It’s quite simple.. the U.S. has the most expensive and unsustainable oil supply in the world. If we go by FACTS and not hype or political grandstanding, the U.S. Shale oil industry has increased oil production growth FIVE TIMES more than Saudi Arabia over the past decade: 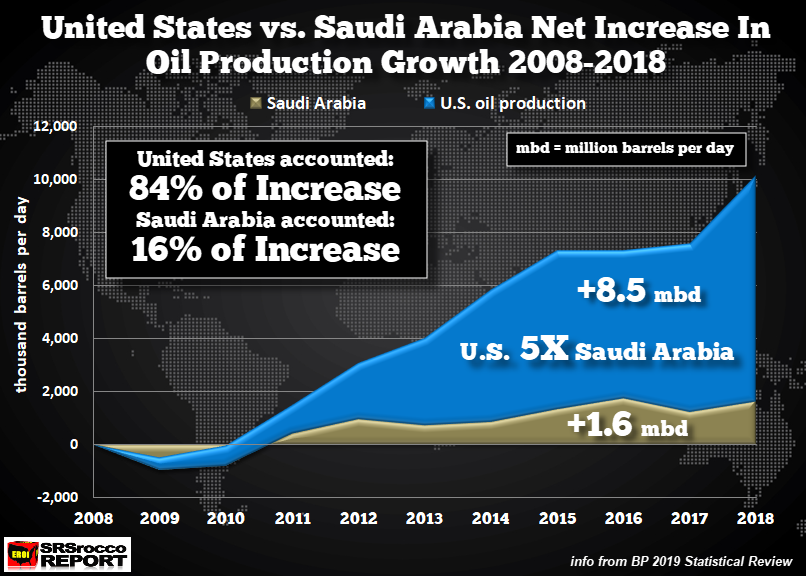 With the United States oil production growth of 84% versus 16% for Saudi Arabia, why should the Saudi’s cut production??  Furthermore, the Saudi’s have been selling their oil at a discount, $25 a barrel.  Unfortunately, U.S. WTIC crude now trading at $22.84 and North Dakota Light Sweet fetching a lousy $14.25, where’s the REAL PROBLEM taking place???

You got it… these super-low oil prices are GUTTING the entire U.S. Shale Oil Industry… backward, forward, upside-down and inside-out… LOL.  Thus, U.S. politicians are desperate because the notion of “Energy Independence” and the “Dollar Dominance” comes under severe pressure.

As I watch the POOR SLOB ANALYSTS on CNBC trying to make a case that the market has hit bottom, I wonder if they have any idea about the massive carnage taking place in the MAIN DRIVER of the economy… the Global Oil Industry.

Not a chance… so, while we have to continue listening to these Wall Street Clowns on CNBC, they do not realize their occupation is no longer necessary.

WALL STREET IS DEAD… it just doesn’t know it yet.

I have mentioned several times in articles and youtube videos that it wouldn’t take much of a decline in the global oil supply to take down the Highly Leveraged Debt-Based Financial System.  Unfortunately, what we got with this global contagion is TEN TIMES WORSE.  Thus, the global financial system is now in the process of disintegrating right before our eyes in glorious 3D Widescreen Technicolor, even with the Fed and Central Banks intervention.

All the Central Banks can do at this point is to KEEP THE TERMINAL PATIENT ALIVE a bit longer. We have no idea what the world looks like when 20-25% of oil production is lost.  This will totally destroy the U.S. Treasury Market that is based upon growing oil supplies to remain viable.

Have you have ever thought about how a 30 Year U.S. Treasury gets repaid???  You need 30 years of global growth to allow that 30-year U.S. Treasury to be paid back.  These Treasuries aren’t just PAPER CERTIFICATES.. they are based on a business model of growth.  And growth is based upon oil production growth.  Thus, a 20-25% decline in global oil production will DESTROY the Stock and Bond Markets while Wall Street continues to regurgitate the V-SHAPED RECOVERY or a RETURN TO NORMALCY by next year.

Again, these poor slobs have no idea of what’s coming ahead.

So, if you believe Home, Car, Boat, and Life Insurance is smart… you better make sure you have some GOLD & SILVER INSURANCE.

THANK YOU ALL FOR THE SUPPORT: I just wanted to thank all the individuals who continue to support the SRSrocco Report website and Ytube channel.  I know some of you have canceled memberships as times are tough.  I totally understand.  If you are new to the site and find the information valuable, please consider supporting the website, if you have the means to do so, at Paypal or Patreon below.

One thought on “The Energy Disaster Kicking Into Full Gear”